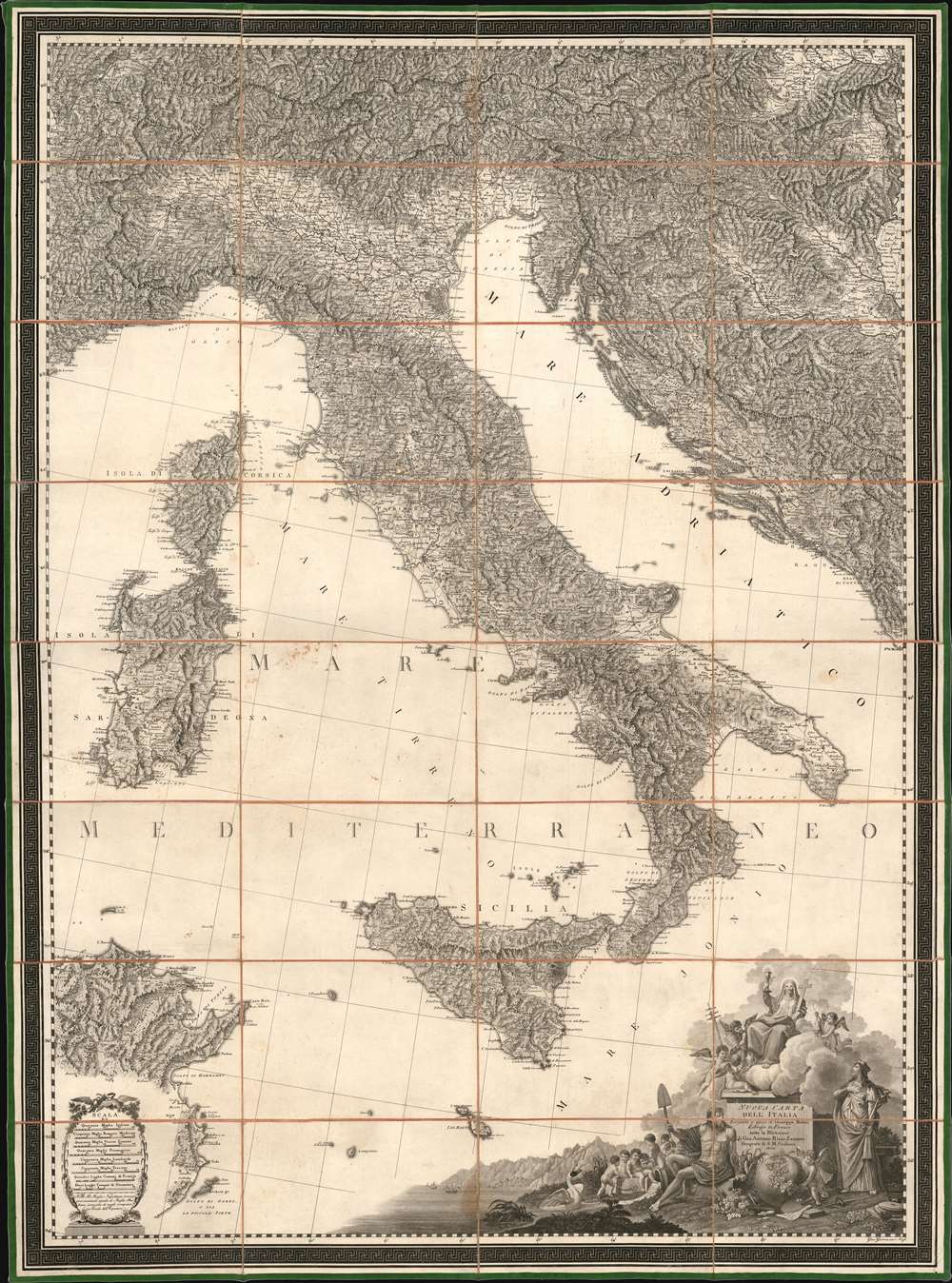 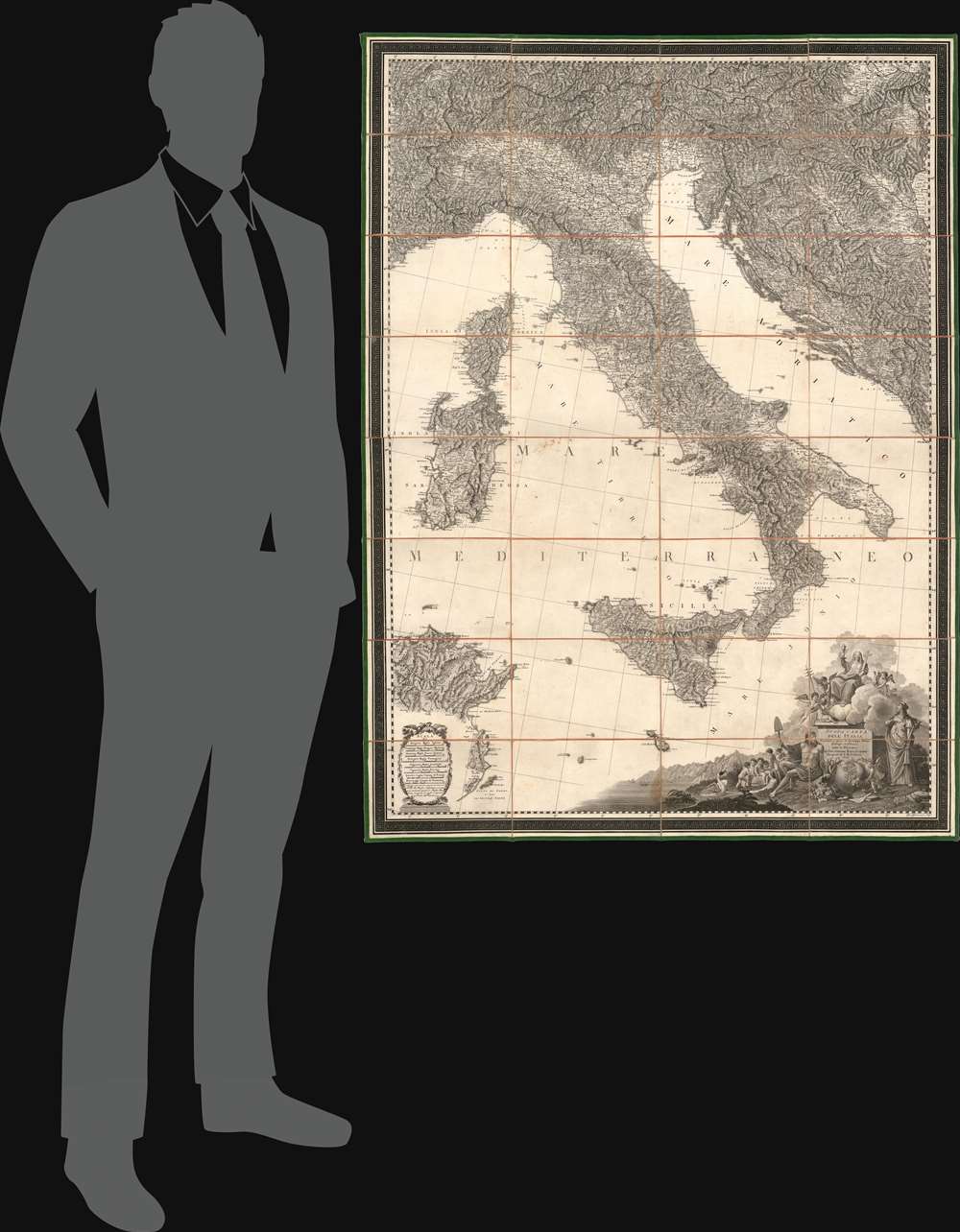 This the magnificent 1802 Rizzi-Zannoni large-scale map of Italy, in a beautiful example on the original linen and with the original slipcase cover. It is one of the first and most beautiful maps of Italy to appear in the 19th century.

This grand wall map was printed by the Florentine publisher Giuseppe Molini. Although a splendid map in its own right, it was intended as a promotion for an ambitious (though never executed) subscription-funded, fifteen-sheet atlas of the peninsula. Unfortunately, only one sheet - the map of Padua - was completed. This monumental work did, nonetheless, garner support for the execution of a superb atlas of the Kingdom of Naples, which Rizzi-Zannoni completed in 1812, two years prior to his death. The map was engraved in Naples by Giuseppe Guerra, whose work also appears in Rizzi-Zannoni’s atlas. And it is in the engraving that this map shines: the mountains, though pictorially represented, are sharply evocative. The lettering is sharp and legible, even amongst the hachured mountainous areas.

The map has a superb scale-cartouche at the lower left; at the lower right is an ornate allegorical cartouche with the personifications of the River Tiber, and Europa gazing up at a modestly-veiled cross-and-chalice bearing Ecclesia, representing the primacy of the Catholic Church over Rome specifically and Europe generally. In a baroque touch, the cartouche is positively crawling with putti.

This separately-published map is scarce, with only eleven examples catalogued in institutional collections.


Giuseppe Molini (1772-1856) was a Florentine knight, bookseller, printer, publisher, bibliographer and librarian, active in the late 18th and early 19th century. Clients of Molini's Bookshop in Florence describe Molini as having "an open strongly-marked countenance", a "rare intelligence", and an willingness to share his bibliographical knowledge with any inquirer. The bookshop, a competitor of Galignani's, was located on the Via degli Archibusieri, near the Ponte Vecchio. Molini's Bookshop is known to have stocked a good selection of material in both English and Italian. His prosperous shop focused not only on the active tourist trade but also sold books to dignitaries and royal courts all over Europe. In addition to his retail establishment, Molini was the proprietor of All'insegna de Dante (Dante's Head Press) and Presso G. Molini, located at no. 823 Piazza di St. Maria in Campo. His publishing corpus includes numerous books ranging in scope from a history of Italy to a biography of the Italian artist Benvenuto Cellini. Molini closed his bookshop when he was appointed director of the Biblioteca Palatina which maintained the important book and manuscript collections of the Grand Dukes of Tuscany. Molini held this position until his death in 1856. Learn More...


Giuseppe Guerra (fl. 1800-1860) was a Neapolitan engraver, and Master Engraver within the Kingdom of Naples' Officina Topografica. Not to be mistaken for the Neapolitan painter and forger of the same name, active in the middle of the previous century. Learn More...