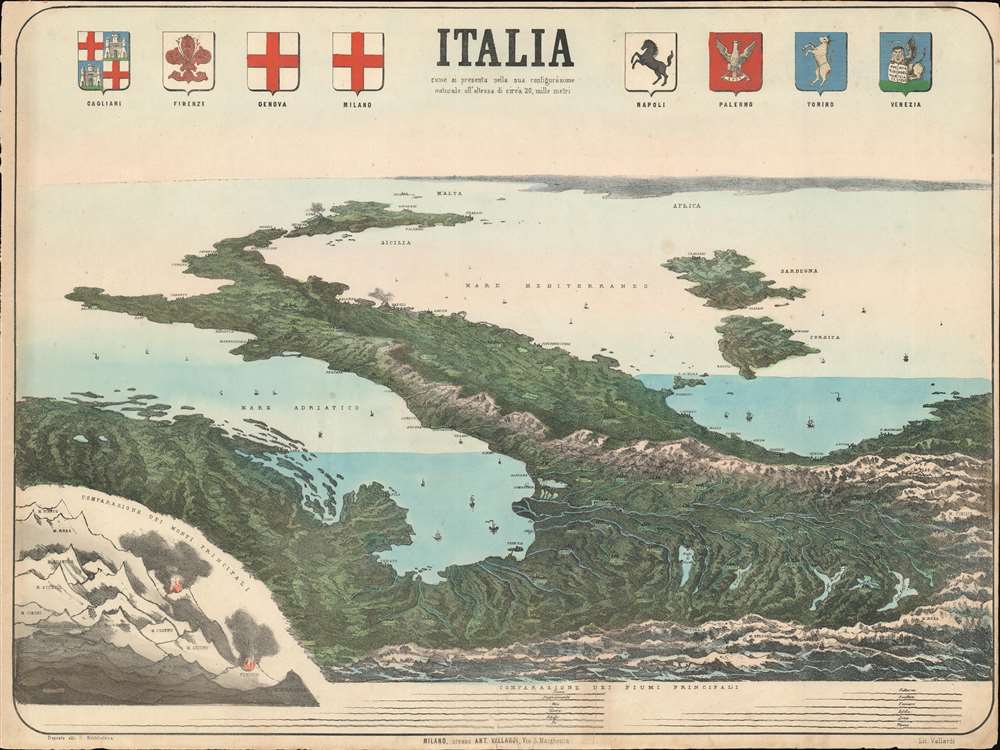 A striking bird's eye view of Italy from the north highlighting all of the peninsula's major cities.
$1,800.00

Drawn as if from a vantage point high above the Italian Alps, this is a c. 1865 Antonio Vallardi bird's eye view of Italy. Overlooking the Italian peninsula from the north, the Italian Alps occupy the foreground, while Sicily, Malta, and the North African coast appear in the background. Italy's cities, marked by shadowy groups of buildings, are labeled, including Milan, Venice, Florence, Rome, and Naples. Ships ply the waters of the Mediterranean and the Adriatic, and both Mt. Etna and Mt. Vesuvius are illustrated emitting clouds of smoke as if erupting. The city crests of Palermo, Turin, Venice, Florence, Naples, Milan, and Genoa flank the title. Charts along the bottom border illustrate Italy's longest rivers and highest mountains. Mountains and rivers charts proved very popular in the 19th century, and many cartographers published charts either separately or included them in their atlases.

This bird's eye view was published by Antonio Vallardi from his publishing house in Milan c. 1865. This is the only known example.

Very good. Even overall toning. Exhibits some edge wear. Exhibits a few minor verso reinforcements along the lower margin.
Looking for a high-resolution scan of this?