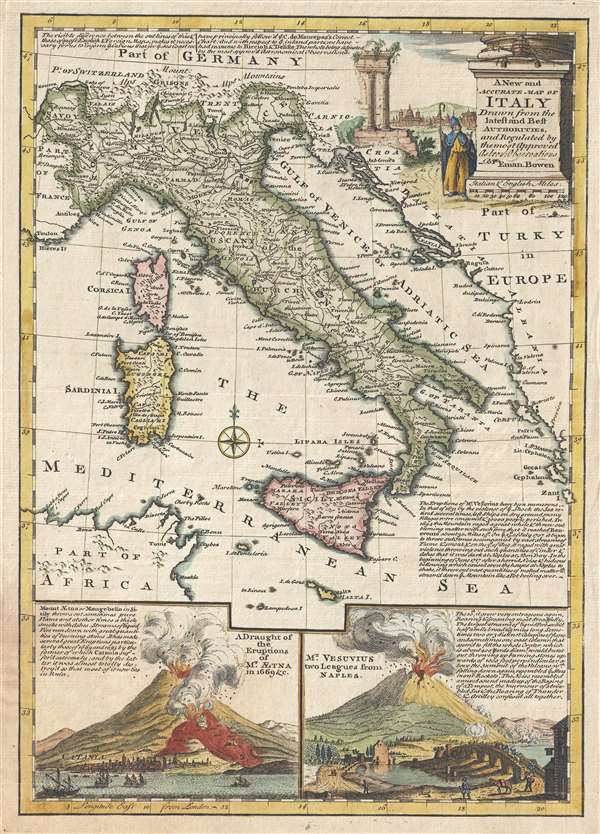 Illustrates and describes the eruptions of Mount Etna and Mount Vesuvius.

This is a charming 1747 map of Italy, issued by the British cartographer Emanuel Bowen. It covers all of Italy from the Alps to Malta, including the Islands of Corsica and Sardinia. Several important towns, cities, roads, rivers, and other topographic features are noted, with mountains rendered in profile. A note along the top border explains the compilation of this map, with the coastlines based on the chart of C. de Maurepas and the interior based on the work of Riccioli and Delisle. Another note in the bottom right quadrant explains the eruptions of Mt. Vesuvius from 1631 to 1717. A beautifully illustrated title cartouche is included in the upper right quadrant.

The bottom of the map features two beautifully illustrated insets, the first being a view of the eruptions of Mt. Etna in 1669 etc. along with a note on the effects of the eruptions. The second inset illustrates Mt. Vesuvius, two leagues from Naples. A note describing the eruption in detail is included in the second inset. This map was prepared by Emanuel Bowen as plate no. 22 for the 1747 issue of A Complete System of Geography.