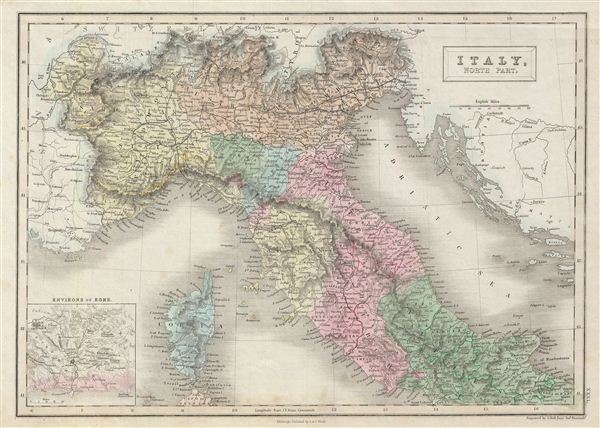 A fine example of Adam and Charles Black's 1851 map of northern Italy. The map covers the island of Corsica and Northern Italy, including the territories of Tuscany, Modena, Parma, the Sardinian States, Austrian Lombardy and the State of the Church. It also includes the northern extension of the Kingdom of Naples. An inset map in the lower left quadrant depicts the environs of Rome. As this map was being drawn, Italy was undergoing the process of Risorgimento,, where the different city-states of the Italian Peninsula struggled for solidary as a single Italian nation. Throughout, the map identifies various cities, towns, rivers, mountain passes and an assortment of additional topographical details. Map is hand colored in pink, green, blue and yellow pastels to define boundaries. The map is engraved by S. Hall and issued as plate no. XXXI in the 1851 edition of Black's General Atlas.