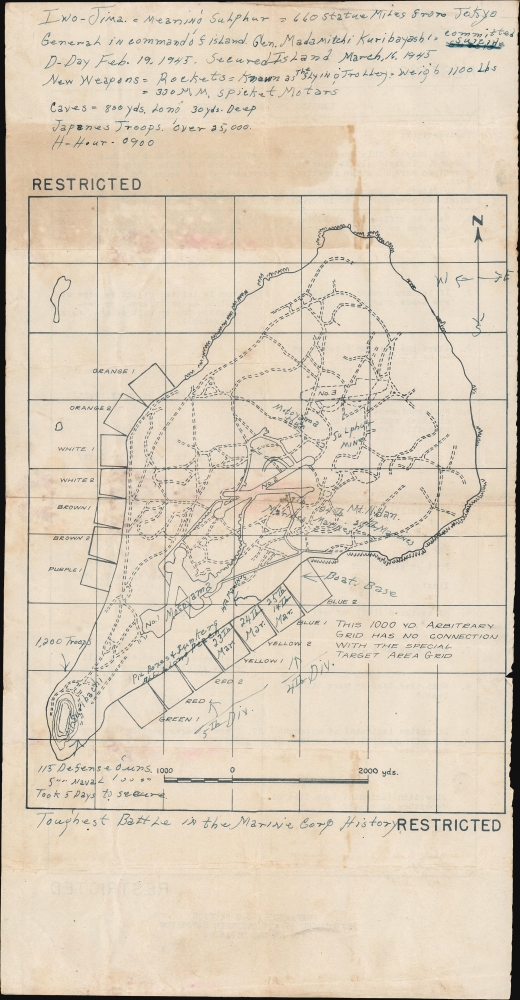 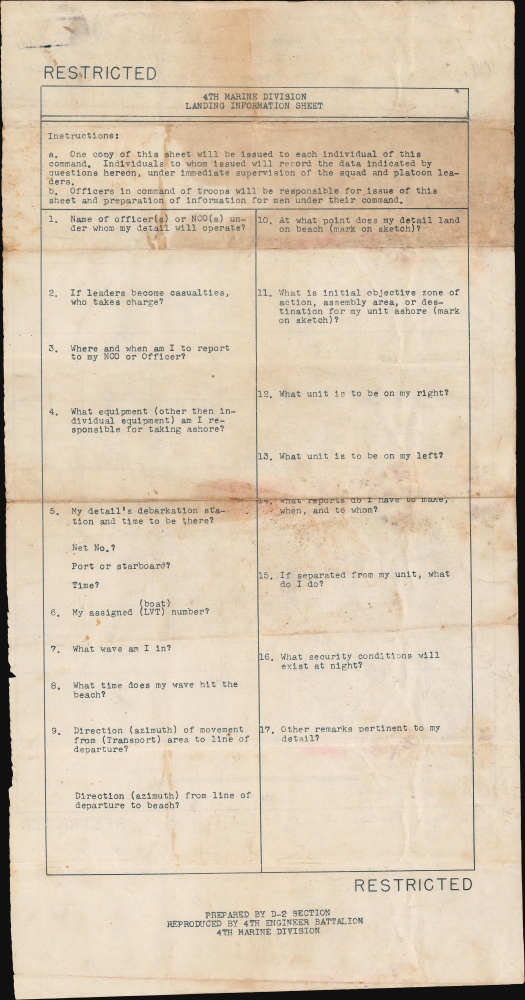 This is a 1945 Marine Corps D-2 (Intelligence) Section map of Iwo Jima. It was created for the February 19, 1945 amphibious invasion, one of the most arduous battles in American military history. The piece offers insight into the pre-planning of the invasion. Additional manuscript content added after the battle, offer a unique record of the Marine experience before, during, and after the event.

The map focuses on three critical airfields. Additional dashed lines defining indigenous footpaths underscore the uncertainty surrounding the interior. Landing beaches, identified by codenames, appear on both the southeast and southwest coasts. An intriguing note on the lower right states that this map's grid is arbitrary and has no relation to the special target grid employed on other maps.

While this map dates to the invasionn(reinforced by the Landing Information Sheet printed on the verso), the manuscript notations were likely added shortly after. These identify beaches where the 23rd, 24th, 25th, and 14th Marines landed, as well as those designated for the 5th and 4th Marines. Another notation identifies Mt. Suribachi, site of the famous flag raising. Additional manuscript summarizes the battle, noting beginning and end dates, the name of the Japanese general in command who committed suicide, distances in the Japanese cave network, and states unequivocally that Iwo Jima was the 'toughest battle in the [sic] Marine Corps History'.

On the verso is a printed 'Landing Information Sheet'. Instructions to officers appear at the top, stating that 'one copy of this sheet will be issued to each individual of this command. Individuals to whom issued will record the data indicated by questions hereon, under immediate supervision of the squad and platoon leaders' and that 'officers in command of troops will be responsible for issue of this sheet and preparation of information for men under their command'. These include: 'If leaders become casualties, who takes charge?'; 'What equipment (other then [sic] individual equipment) am I responsible for taking ashore?; and 'If separated from my unit, what do I do?'. Other information meant to be filled in on this form include debarkation stations, LVT (boat) numbers, which wave the soldier will hit the beach in and at what time, and which units were supposed to be to the soldier's left and right. That these sheets were printed and distributed to 'each individual' underscores the Marine creed that the best soldiers are well-informed soldiers. Curiously, the only surviving (digitized) examples are blank, as here.

The Battle of Iwo Jima

The Battle of Iwo Jima (February 19 - March 26, 1945) was an American invasion of the Pacific island of Iwo Jima. One of the Japanese Volcano Islands, Iwo Jima is 750 miles south of Tokyo. It was set up as a Japanese airbase during WWII. Over the course of the thirty-six-day battle, American forces suffered over 27,000 casualties. Of the approximately 20,000 Japanese soldiers defending the island, only 216 were taken prisoner. Iwo Jima is still remembered for its brutality and heavy toll. Since the battle, the island's significance as a strategic asset has become disputed. In April 1945, less than a month after the end of the battle, retired Chief of Naval Operations William V. Pratt was quoted in Newsweek

The expenditure of manpower to acquire a small, God-forsaken island, useless to the Army as a staging base and useless to the Navy as a fleet base…[one] wonders if the same sort of airbase could not have been reached by acquiring other strategic localities at lower cost'.

The iconic photograph taken by Joe Rosenthal of six Marines raising the U.S. flag at the top of Mount Suribachi, which subsequently became the U.S. Marine Corps War Memorial, is perhaps the most recognizable record of the battle.

This map and the information landing sheet were prepared by the D-2 (Intelligence) Section of the 4th Marine Division and reproduced by the 4th Engineer Battalion in 1945. We note two surviving examples, one of which is part of the collection at the Avon-Washington Township Public Library in Avon, Indiana. The other appeared at Bonhams in 2015.