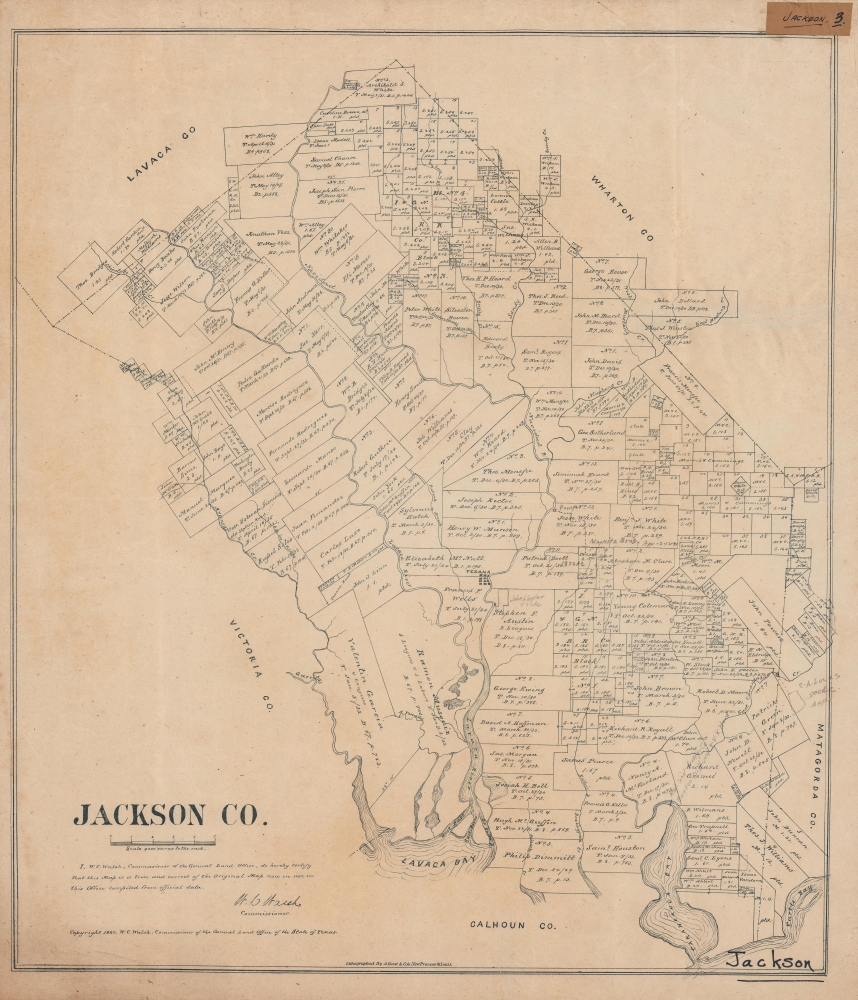 A rare 1880 plat map of Jackson County, Texas, produced by the Texas General Land Office and printed (lithographed) by August Gast. It depicts the county on the eve of an important transformation brought by the railroad.

Jackson County is situated midway down the Texas coast, about midway between Houston and Corpus Christi. Much of the county originally consisted of coastal prairies and the rivers and bays seen here provide access to the Gulf of Mexico.

By the time this map was produced, Jackson had been in existence for nearly 50 years, having been founded in 1836 (named for Andrew Jackson) as a municipality within Mexican Texas and then as one of the original counties of the independent Republic of Texas. As such, it was an early site of settlement for members of the 'Old Three Hundred' families who purchased parcels of land from Stephen Austin's land grant in the early 1820s. As with the wider region around the old Spanish Presidio La Bahía, Jackson County had originally been home primarily to Karankawa people, who had a difficult relationship with the Spanish before being driven out of the area by settlers in the 1820s - 1850s. During the Texas Revolution, many residents fled and their farms were burned by Santa Anna's troops.

Compared to a contemporary map of neighboring Calhoun County recently sold by us (CalhounCounty-texasglo-1879), there are more Anglos and less Tejanos among the landowners of Jackson County. As in Calhoun County, there does appear to have been noticeable but not absolute spatial segregation between the two groups. In this case, Tejanos mostly reside west of the Lavaca River and Anglos to the east. Unsurprisingly, some landowners owned property in both counties.

Notable among the landholders indicated here are Texas founding fathers Stephen Austin and Sam Houston, both long deceased by the time this map was published, but their property had presumably been retained by descendants. Though no railroad existed at this time in the county, the International-Great Northern Railroad owned tracts of land in the county. However, it was another company, the New York, Texas and Mexican Railway, that first built a railroad there.

In the mid-19th century, Texana emerged as the main town in the county, but the overall population remained small and agrarian, with as much as one-half of the county's population being enslaved, tasked with growing cotton and sugarcane. In the years immediately following this map's publication, the Italian-born railroad entrepreneur Joseph (Guiseppe) Telfener built the New York, Texas and Mexican Railway through Jackson County. The residents of Texana were ambivalent about the project because they thought it would threaten the town's maritime shipping, so a station was built to the west, closer to the Lavaca River. Edna, named for one of Telfener's daughters, quickly outgrew Texana as a result, and was made the county seat in 1883. By 1884, Texana was a virtual ghost town and today only exists as a historical site within Edna.

This map was prepared by the Texas General Land Office and printed by August Gast in 1880. We note it among the holdings of the University of Houston, the Library of Congress, and Texas A and M University, and it has no known history on the market. A later edition was published in 1896 and is similarly scarce.


August Herman Ludwig Gast (March 10, 1819 - December 24, 1891) was a German-American lithographer. Born in Lippe Detmold, Germany, was educated there, and went into the lithography business with his brother Leopold (March 11, 1810 - March 1, 1898). After participating in the Revolution of 1848, the brothers emigrated to the United States and arrived in New Orleans and, of course, they brought their lithography press with them. them. The duo worked in New York City for a few months, and then spent over a year in Pittsburgh before settling in St. Louis, Missouri in 1852. In St. Louis the brothers founded Leopold Gast and Brother Lighograph Company, which Leopold ran until he sold his share of the business to August in 1866. After Leopold's departure, Gast continued to grow his lithography business, now called August Gast and Company, until he sold it in 1885, when it was one of the largest firms of its kind in the country. After the sale, Gast founded the August Gast Bank Note and Lithograph Company and the Gast Wine Company. Gast died of 'la grippe' in St. Louis at the age of 72. He married his wife Sophie von Laer in 1853. Tragically, Sophie died in 1864. At some point thereafter, Gast married Marie Barthel, with whom he had thirteen children, of whom only four were alive at the time of August Gast's death. Following Gast's death, his son Ferdinand takes over the businesses, and the Gast Wine Company is absorbed by the Gast Brewing Company in 1900. The Gasts continue to prosper and found the Gast Building and Realty Company in 1944, and Ferdinand's grandsons, Ferd Gast and Robert Gast, invest in and develop real estate. Robert created several companies over his lifetime, including those that invest in single family homes and ones to develop, build, and operate amusement parks. Doug Gast, Robert's son, stars a financial investmentsd business in the 1960s, followed by Gast Webbing Restraints in the 1980s, which manufactured automotive parts. By the 2000s, the third generation of Gasts are involved in the family real estate business, and today Gast Companies has consolidated in order to manage their diverse portfolio. Learn More...

Very good. Even toning. Repairs and reinforcements on the verso to marginal tears. Small hole at top-center in the plot marked 'No. 23 Archibald S. White.' Handwritten annotations in pencil provide updated or corrected information on property ownership.