1794 Laurie and Whittle Broadsheet, The Glorious First of June 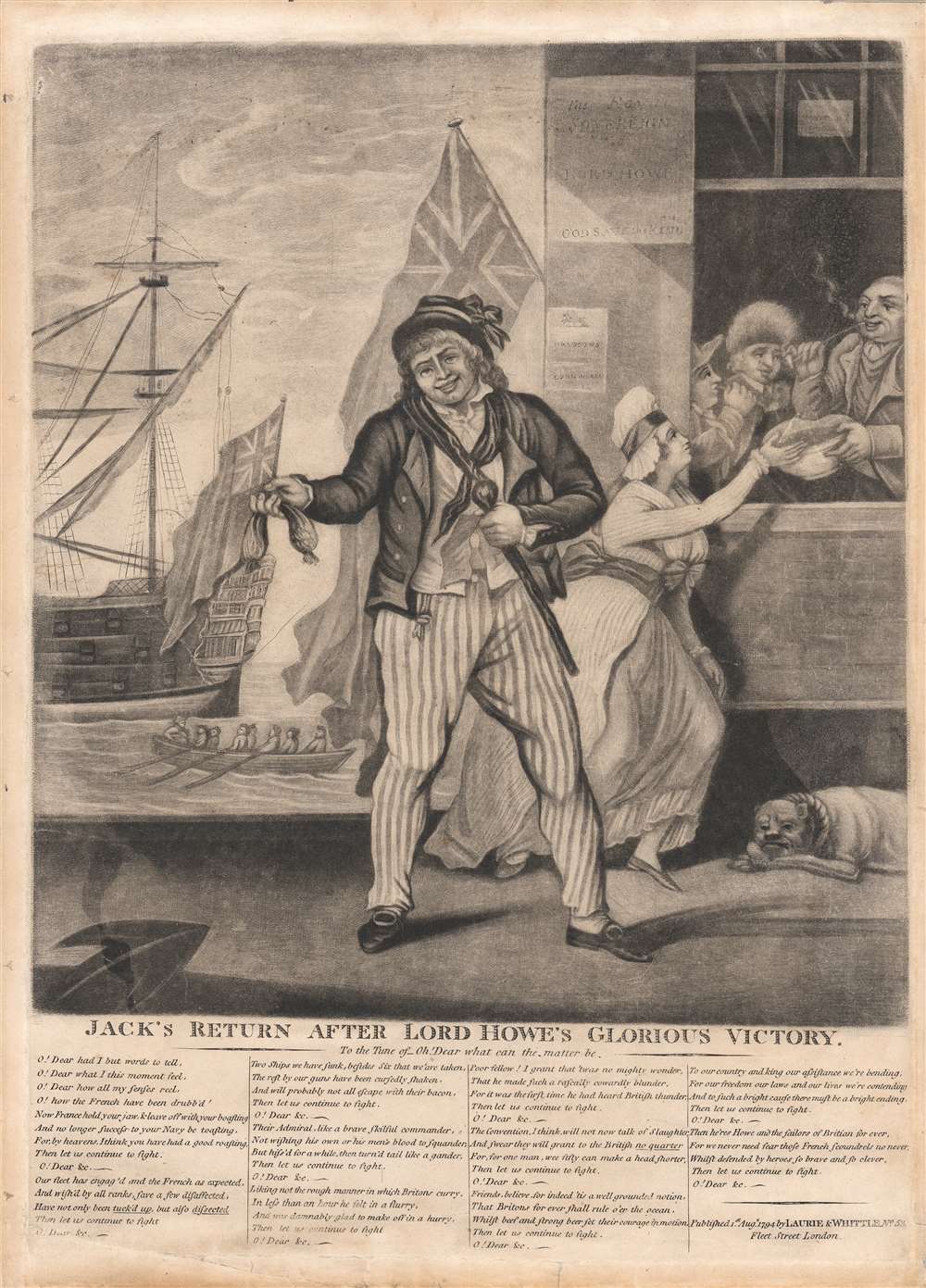 1794 Laurie and Whittle Broadsheet, The Glorious First of June

A British patriotic broadsheet mezzotint issued in the wake of the Glorious First of June (1794), a decisive British naval victory over Napoleonic France in the War of the First Coalition (1772 - 1797). It depicts a street scene at the wharf where victorious sailors are disembarking.

'Jack' or 'Jack Tar' was a common term referring to 18th century British sailors. This broadsheet portrays a generic sailor returning from the British 'victory' known as the Glorious First of June, under the command of Admiral Richard Howe. He holds a purse in one hand (pay for his service), and papers and a stick in the other. Behind him a group of men sit celebrating and smoking in a pub and pass a bowl of punch out the window to a woman on the street. Patriotic posters and a British flag adorn the side of the pub while a ship in the background is depositing more sailors on the shore via rowboat. The text at bottom is a reworking of the song 'Oh Dear! What Can the Matter Be?' with patriotic lyrics praising Howe and mocking the French.

There was a surge in prints relating to the Royal Navy around this time, as the sea was the primary arena for fighting between Britain and Revolutionary France during the War of the First Coalition. While sailors were esteemed for their role in defending the British Isles, there was no mystery about the difficulties of life on the sea, and men could be press-ganged into service if the ranks needed to be filled.

The Glorious First of June

The Glorious First of June (1794), fought in the North Atlantic far off the coast of Ushant, was the first and ultimately the largest naval engagement between Britain and France during the Revolutionary Wars. It was driven by British efforts to cut off grain convoys from the United States to France. Howe adopted the unusual tactic of raking enemy ships, which might have proved decisive, but his orders were not understood or followed by all the ship captains. In the event, the French lost seven ships and the British none, while the American grain convey did make it through. Both sides claimed victory and returned to port to a hero's welcome. Critically, however, the British damaged the French fleet badly enough that they could blockade France for the rest of the war.

This print was published by Laurie and Whittle on August 1, 1794. It is only known to be held by Yale University, Brown University, and the British Museum and has no known history on the market.

Good. Toning and creases in the margins.