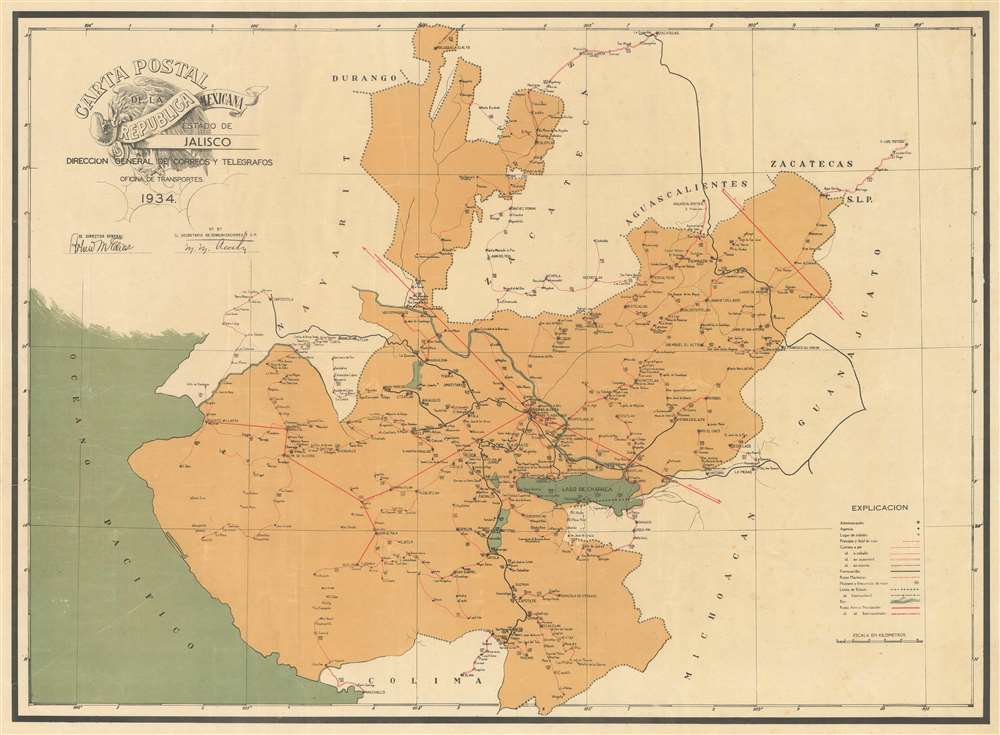 Traces mail routes in Jalisco that are delivered on foot, on horseback, by car, and by tram in a region famous for its Tequila.
$600.00

This is a 1934 General Directorate of Post and Telegraphs map of Jalisco, Mexico. Centered on the major city of Guadalajara, the maps coverage extends to all of Jalisco's unusual shape, from the Pacific, to its boarders with Guanajuato, Zacatecas, Durango, and Michoacán. Today Jalisco is best known outside of Mexico for the product of Tequila, one of the great artisanal sprits. It also has a significant mezcal tradition. But this map is about the mail…

Mail is delivered in four different ways in Jalisco: on foot, on horseback, by car, or by tram, three of which are depicted by red lines, while trams are illustrated by black lines. Each mode of delivery is marked differently, allowing the viewer to understand how mail is delivered throughout the state. Vertical lines identify the beginning of the route (one vertical line) and the end (two vertical lines). Dashed red lines mark routes that are delivered on foot, while single solid red lines trace those on horseback, and two parallel solid red lines highlight those delivered by car. Routes delivered by tram are marked by think black lines with vertical dashes. Each route is numerically identified by a four-digit number which appears as the numerator of a fraction, with the all route numbers in Jalisco beginning with the numbers one or five. The frequency of delivery of each route is indicated by the denominator of each fraction, with 52 marking routes that are delivered once a week, 104 twice daily, 156 thrice weekly, 312 weekdays, 365 daily, and 730 twice daily. Solid black lines highlight railroads, which are delivered at varying intervals. The large red lines mark national aviation routes.

This map was created and published by the General Directorate of Post and Telegraphs of the Transport Office in 1934. We have not located any examples of the 1934 edition in institutional collections, but an example of the 1942 edition is part of the Mapoteca Manuel Orozco y Berra in Mexico City. It is scarce on the private market.