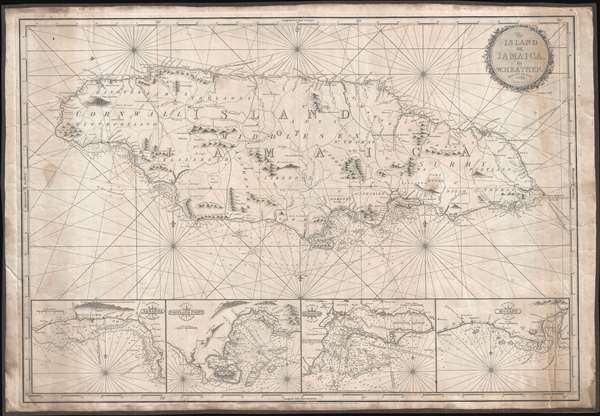 Beautiful, rare, and important, this blueback chart of Jamaica was issued in the year of the Great Jamaican Slave Revolt or Baptist War.

This is a rare and stunning 1832 blueback nautical chart or map of Jamaica by William Heather and John W. Norie. As a working chart, it bears all of the hallmarks of a shipboard chart and a life at sea. The map details all of Jamaica with four inset detail harbor maps along the bottom, from left: Savanna, Portland Point, Kingston, Morant. Sounding along the south coast, and in the insets, in fathoms.

Unlike many British blueback charts, the present map actually offers considerable inland detail. Here Jamaica is divided into three counties (Cornwall, Middlesex and Surry), each of which is in turn subdivided into Parishes. The chart includes significant topographical detail, including roads, rivers, mountains, towns, churches, military camps, and more.

This map was issued shortly following the suppression of the Baptist War or Great Jamaican Slave Revolt ( 1831 - 1832). General interest in Jamaica and increased British naval activity in the region following the revolt may have led Noire to reissue Heather's chart in the hope of a quick profit. Although the slave revolt was suppressed, the brutality of the pantocracy during the revolt likely influenced and even accelerated the British process of emancipation which followed in 1833.

Heather first issued this chart in 1808. The present chart is a revised edition issued by Norie, Heather's heir, published in 1832 - but in fact there are few if any changes. Like most Heather charts, the present chart was engraved by John Stephenson. We are aware of only two other examples of this map, on in the Bibliothèque Nationale de France and the other in private hands. This map is owned jointly by Geographicus and Vetus Carta Maps.


John Stephenson (fl. c. 1790 - 1836) was a British engraver active in the London nautical chart trade in the late 19th and early 19th century. There is some speculation by Worms, Baynton-Williams, and other map scholars, that seem to suggest Stephenson apprenticed with the stationer Charles John Downes. Stephenson engraved for the nautical chart firm of John Hamilton Moore before moving on to the firm of William Heather in 1793. Heather's firm was subsequently inherited, along with Stephenson, by John William Noire. Stephenson's work is characterized by strong lines, elaborate decorative embellishment, and finely-engraved detail, it is commonly associated with John Noire. Learn More...