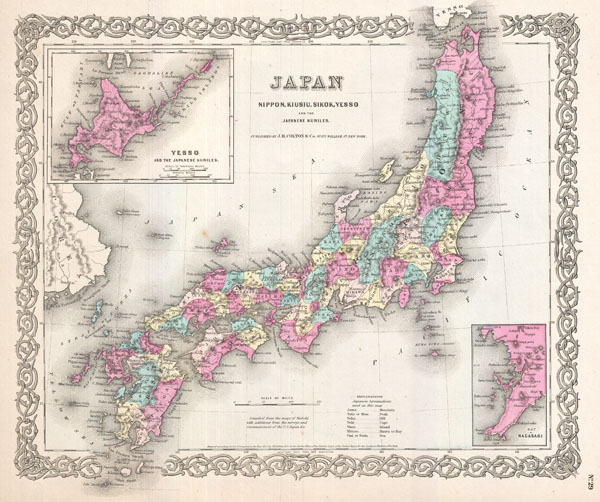 A beautiful 1855 first edition example of Colton's map of Japan. Compiled from the maps of Siebold and from the 1850 U.S. Japan Expedition (Perry). Covers the Japanese Islands from Kiusiu north to Yesso (Hokkaido). Offers considerable detail with color cording according to province. An inset map in the upper right focuses on Hokkaido or Yesso and the Japanese Kuriles. Another inset in the lower right quadrant details the Bay of Nagasaki. Throughout, Colton identifies various cities, towns, rivers and assortment of additional topographical details. Surrounded by Colton's typical spiral motif border. Dated and copyrighted to J. H. Colton, 1855. Published from Colton's 172 William Street Office in New York City. Issued as page no. 29 in volume 2 of the first edition of George Washington Colton's 1855 Atlas of the World.