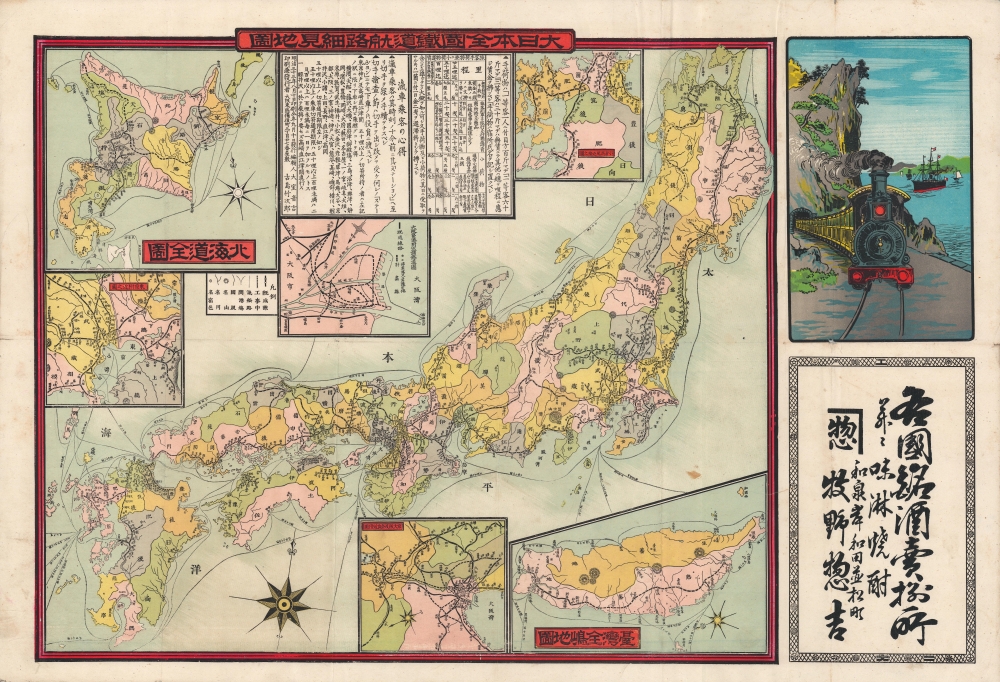 A colorful 1900 map of Japan by Ōmuro Otokichi and Furushima Takejirō. It focuses on the country's growing rail and sea route networks, both catalysts and consequences of the country's rapid modernization over the previous thirty years.

The main map displays the prefectures of Japan, shading them different colors for easy distinction, and highlighting railways (in operation and under construction) and passenger sea routes. Inset maps focus on Hokkaido, the Tokyo region, Osaka Bay (with several planned railways), the Kansai region (Osaka and Kyoto), Taiwan, and the Ogura-Orio region, at the northern tip of Kyushu.

A table below the title provides detailed information on passenger classes according to the weight of baggage and distance of travel as well as reminders about procedures for passengers, which differed depending on the distance of their journey and the stations at which they disembarked. Finally, a beautiful vignette illustration at top-right depicts a steam train and steamship, while an advertisement appears in the box at bottom-right.

This map dates from an era when railways were the primary means of interurban travel in Japan. Beginning with a train line between Tokyo and Yokohama in 1872, Japanese railways expanded at a feverish pace in the late 19th century, with both private and public railways contending to meet the needs of passengers and industry. As can be seen here, the two densest nodes of rail network sat in the Kanto and Kansai regions, centered on Tokyo-Yokohama and Osaka-Kyoto, respectively.

In the closing years of the 19th century, mergers among private railways and greater government regulation helped to standardize and consolidate the rail network. It was mostly nationalized in 1906 in the wake of the Russo-Japanese War (1904 - 1905), aiding its further integration. Heavy investment in both interurban railways and suburban light rail gave Japan an excellent transportation network by the 1920s - 1930s. Similar to Britain, the railways became a cultural symbol of the empire itself, not only on the Japanese home islands but also in Japan's colonies, where the railways were harbingers of drastic social, economic, and cultural changes.

This map was published in 1900 (Meiji 33) by Ōmuro Otokichi (大室音吉), noted as the editor and publisher, and Furushima Takejirō (古島竹次郎), listed as the printer. There are several printings of this map, all dated to 1900, distinguished by the text of the advertisement box at bottom-right. It is not listed among the holdings of any institution either within or outside of Japan and it is scarce to the market.


Furushima Takejirō (古島竹次郎; fl. c. 1895 - 1908) was a woodblock print artist based in Osaka in the late Meiji period. Though generally working in lowbrow or popular formats, such as souvenir picture books and advertisements, his works were distinguished by the use of bold, brilliant colors. Learn More...

Very good. Small areas of loss at fold intersections and along fold lines at edge.