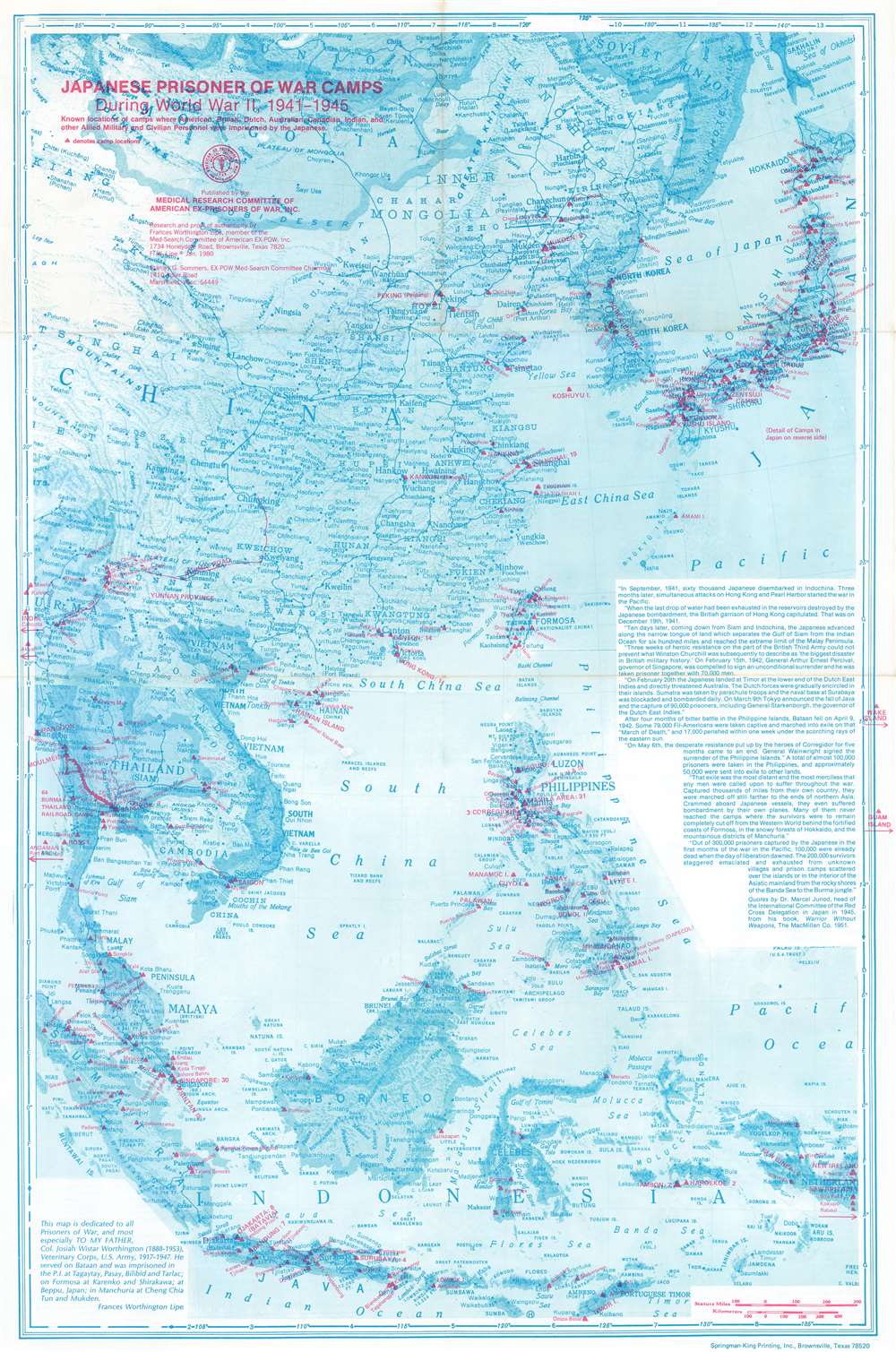 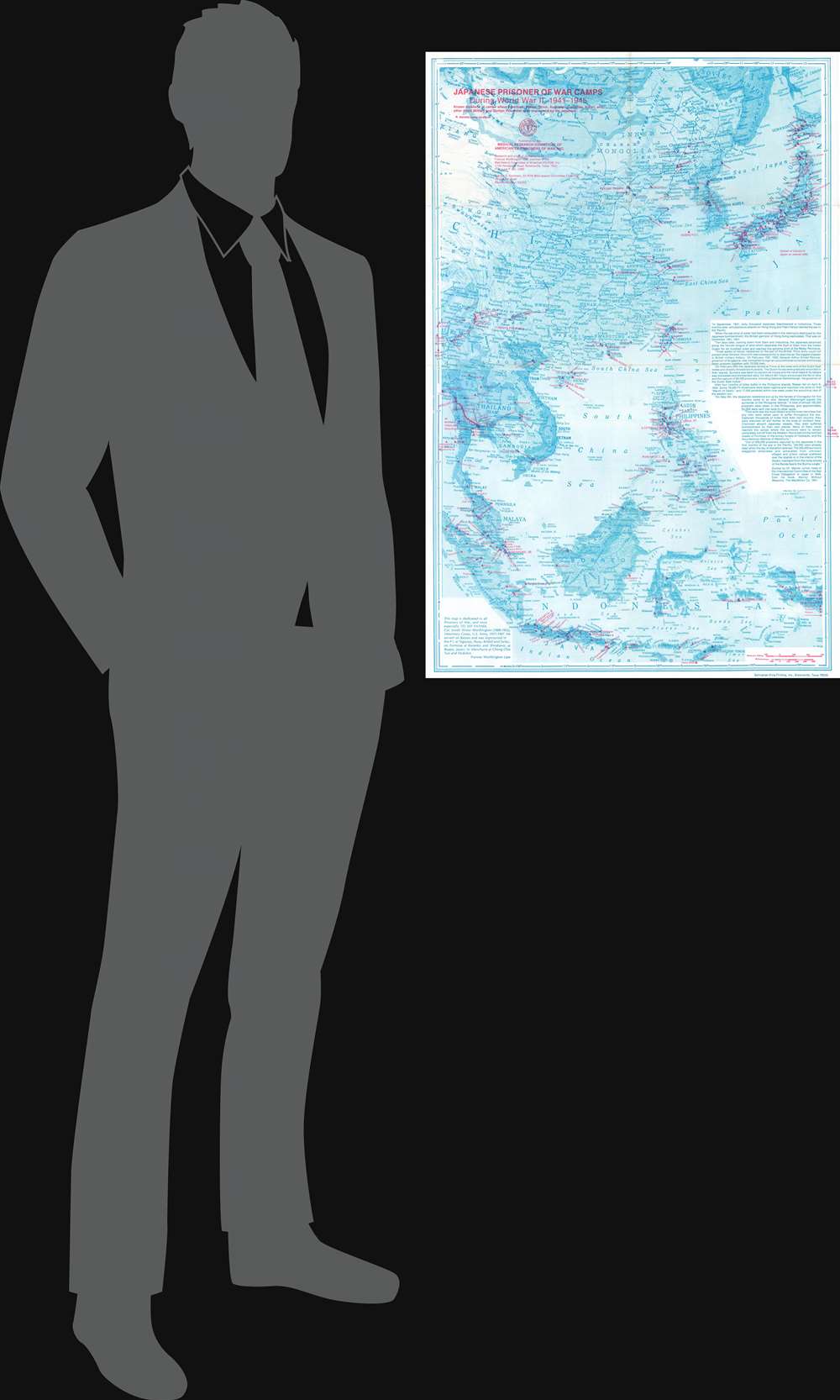 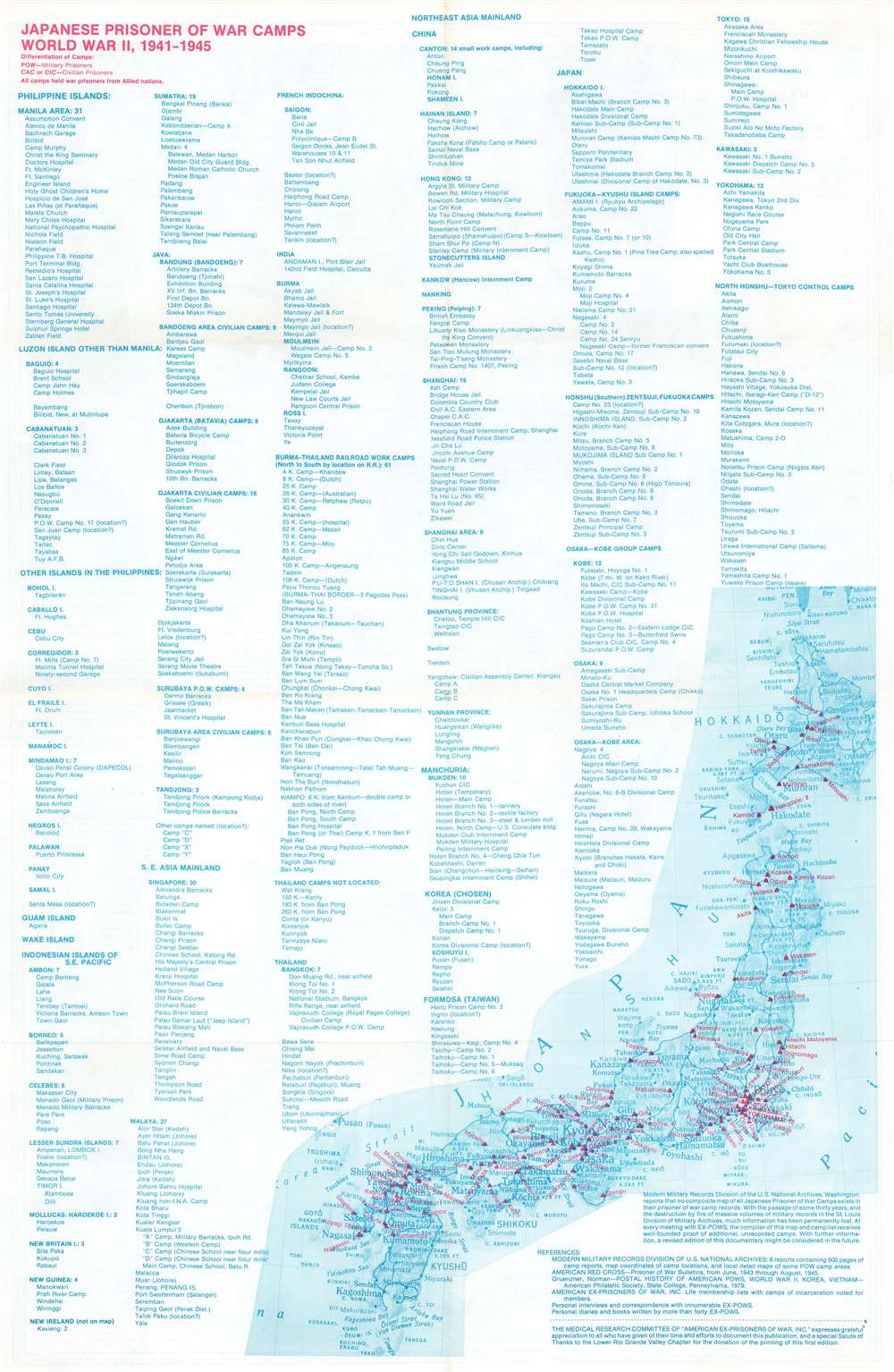 This is a 1980 Frances Worthington Lipe map of East Asia highlighting World War II Japanese Prisoner of War Camps. Coverage extends from the Soviet Union south to Portuguese Timor and the Timor Sea and from Rangoon, Burma, and western China east to Japan. Maroon overprinting identifies prison camp locations, naming most, save in areas where multiple camps were concentrated. For example, the camps in and around Manila are not individually identified. 'Manila Area' appears in block lettering and is followed by the number thirty-one. Other cities follow the same model, including Hong Kong, Singapore, Beijing (Peking), and Shanghai. A line of triangles (marking the camps) stretches from Bangkok to Moulmein following the infamous Burma Railway. Some camps, including those on Guam and Wake Island, are noted, but appear outside the map's geographical scope. A short text along the right border provides a compelling summary of the history of Japanese prisoner of war camps.

Josiah Wistar Worthington (December 29, 1888 - June 17, 1953), Frances's father, joined the U.S. Army in 1917 at Fort Sam Houston in San Antonio as a second lieutenant. Worthington was transferred to the Philippines before World War II, and in January 1941 his wife and children visited him there. A veterinarian, Worthington was a colonel on the staff of General Jonathan Wainwright at the time of the Japanese attacks on Pearl Harbor and the Philippines. He was with Wainwright on Corregidor when Bataan fell, and he and four others attempted to escape to Australia in an 18-foot banca, but were captured. Worthington spent the next two-and-a-half years in Japanese prison camps in the Philippines, Formosa (Taiwan), Japan, and Manchuria. He was released from a camp in Mukden by the Soviets in late August 1945. On the night of June 17, 1953, Worthington was shot and killed by a neighbor, Richard A. Hightower, in his own backyard during a prenuptial dinner for Frances. According to eyewitnesses, Hightower crossed the street and began yelling outside the house 'who is beating that child?' The child in question was not being beaten but was throwing a temper tantrum because they did not like the music at the party. Nonetheless, Hightower continued yelling outside the house and when Worthington approached him to try to calm him down, Hightower shot him with one blast from a .410 shotgun. According to newspaper accounts, after Hightower shot Worthington, Hightower's wife took the gun and went home. In another tragic turn of events, Frances's signature appears on Worthington's death certificate as the 'Informant'. Hightower was charged with murder but was never convicted, because he hanged himself from a tree five years later, in 1958, after being deemed 'cured' of the 'insanity' that got him committed to a Texas mental hospital before his trial in 1953.

This map was researched and compiled by Frances Worthington Lipe and published by the Medical Research Committee of American Ex-Prisoners of War, Inc. We note four examples cataloged in OCLC, which are part of the collections at the Library of Congress, Pennsylvania State University, the Wisconsin Veterans Museum Research Center, and Stanford University. We have located a fifth example, at the Australian War Memorial.

Frances Worthington Lipe (February 28, 1929 - Present) is an American author and researcher. She compiled a map entitled 'Japanese Prisoner of War Camps During World War II, 1941 - 1945: Known locations of camps where American, British, Dutch, Australian, Canadian, Indian, and other Allied Military and Civilian Personnel were imprisoned by the Japanese', which was originally copyrighterd in 1980. She also compiled and edited Hell and Beyond - A Diary of War and Captivity from her father's letters and writings when he was a Japanese prisoner of war during World War II. Lipe was active in the Republican Party in Texas in the 1960s and 1970s. Learn More...