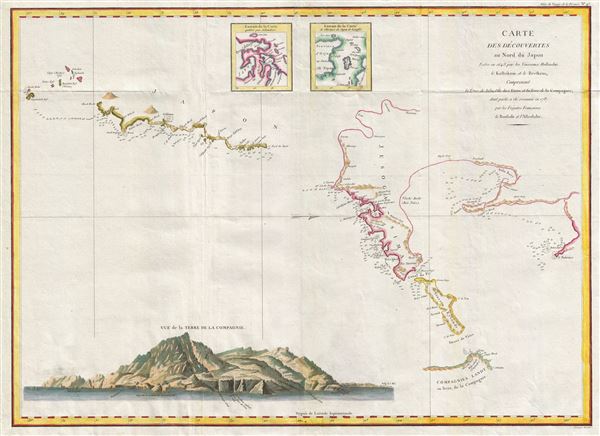 The second major European expedition to northern Japan, Hokkaido, and the Kuril Islands.

An important 1787 map of northern Japan, Hokkaido, and the Kuril Islands by the French navigator Jean-Francois de Galaup, Comte de Laperouse. Oriented to the west, this map covers from the small islands due south of Yokohama Bay and northwards as far as Sakhalin and east to the Kuril Island of Iturup (Compagnies Landt). A large and dramatic view of Terre da la Compagnie (Iturup) decorates the lower left quadrant. Two small inset maps at top center are drawn from the works of Scheuchzer and Kampfer's History of Japan.

The Laperouse expedition was the first significant European exploration of this region since the 17th century treasure hunting voyage of Dutchmen Maerten de Vries and Cornelis Jansz Coen. The Perouse expedition closely followes the Vries-Coen voyage, which it references in the title, skirting the same coast, sighting the same islands, and making many of the same errors. While more detailed than the earlier maps associated with the Vries-Coen voyage, it offers little new information of significance save, perhaps, a few new soundings and the fine view of Terre de la Compagnie in the lower left quadrant. Like Vries and Coen, the Laperouse expedition failed to identify Hokkaido as an island and tentatively joines it to the southern forks of Sakhalin. Also like Vries and Coen, Laperouse fails to explore Compagnie (Iturup) but follows cartography with an excessive and erroneous mapping of the island. This map was engraved by Herault and published as plate no. 47 in the 1797 French edition of the Atlas du voyage de La Perouse