1749 Vaugondy Map of Japan and Korea (Sea of Korea) 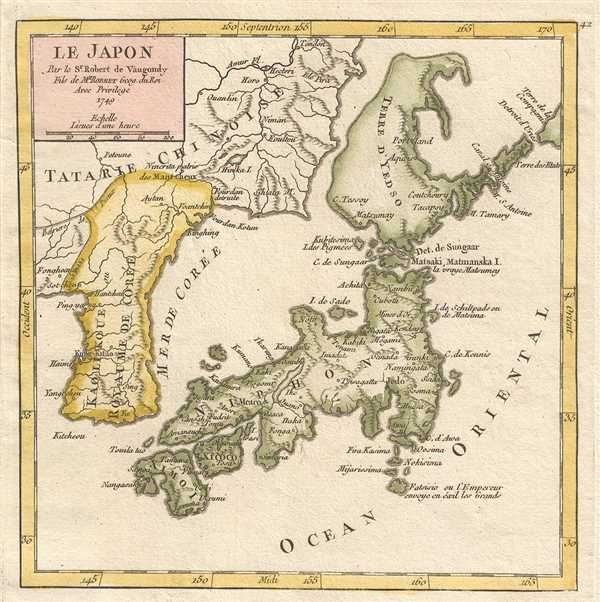 1749 Vaugondy Map of Japan and Korea (Sea of Korea)

Rare map of Japan and Korea ientifying the Sea of Korea.

This is a hand colored 1749 Didier Robert de Vaugondy map of Japan and Korea, with Sea of Korea identified. The map centers on the home islands of Japan and depicts from Korea and China to the Pacific Ocean (Ocean Oriental). Japan itself is dotted with cities and towns, including Osaka (Osaca) and Nagasaki (Nangasaki). China is labeled as 'Chinese Tartary' and Korea is the Kingdom of Korea. The Island of Hokkaido, here identified as Terre d'Yedso, is joined with southern Sakhalin, suggesting a very primitive understanding of the region.

Just east of Hokkaido (Yedso) there is an unusual Terre de la Compagnie, reflecting preliminary sightings of the Japanese Kuril Islands in 1643 by the Dutch navigators Maerten de Vries and Cornelis Jansz Coen. Vries and Coen discovered the Kuril Islands while searching for Juan de Gama Land, supposedly a lost island northeast of Japan replete with silver and other precious metals.

The sea between Japan and Korea, whose disputed name, the 'Sea of Korea', 'East Sea', or the 'Sea of Japan,' is here identified in favor of Korea (Mer de Corée). Historically, Korea has used the term 'East Sea' since 59 B.C., and many books published before the Japanese annexed Korea make references to the 'East Sea' or 'Sea of Korea'. Over time, neighboring and western countries have identified Korea's East Sea using various different terms. The St. Petersburg Academy of Sciences referred to the East Sea as 'Koreiskoe Mope' or 'Sea of Korea' in their 1745 map of Asia. Other seventeenth and 18th century Russian maps alternate between 'Sea of Korea' and 'Eastern Ocean'. The 18th century Russian and French explorers Adam Johan von Krusenstern and La Perouse called it the 'Sea of Japan', a term that became popular worldwide. Nonetheless, the last official map published by the Russians name the East Sea the 'Sea of Korea'. The name is currently still a matter of historical and nationalistic dispute between the countries.