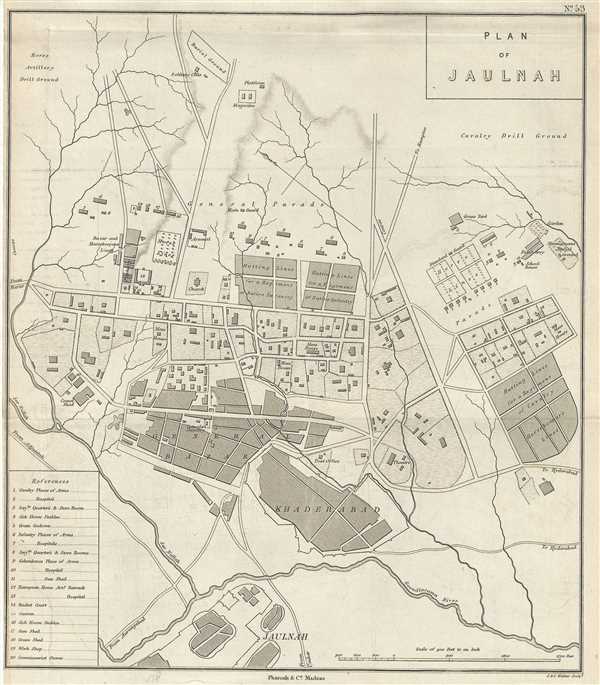 The town of Jalna in Maharashtra India during British rule.
$175.00

An uncommon 1854 map of the city of Jalna in the Indian state of Maharashtra. Issued by Pharoah and Company, the map covers the city on the banks of the Kundalika River in beautiful detail noting several important buildings of the former military station. A reference in the bottom left quadrant lists the places marked on the map. When this map was issued, the city of Jalna was part of the Princely State of Hyderabad. This map was engraved by J. and C. Walker and issued as plate no. 53 by Pharoah and Company in their 1854 Atlas of Southern India.

J. B. Pharoah (fl. c. 1838 – 1869) was a Madras, India, based bookseller and publisher of educational books and map active in the middle of the 19th century. He maintained a bookshop on Mount Road. The form was a general emporium for European published work. They also published a weekly English language newspaper called The Athenaeum and Statesman (in 1864 renamed, he Athenaeum and Daily News). They also published the The Madras Quarterly Medical Journal and The Madras Journal of Literature and Science. Little more is known of Pharoah.


John Walker, Alexander Walker and Charles Walker, known collectively as J & C Walker (fl. 1820-95), were engravers, draughtsmen and publishers working through the 19th century. They had several offices 47 Bernard St Russel Sq (from 1830 - 1836), 3 Burleigh St Strand (from 1837 to 1840), 9 Castle St Holborn (from 1841 to 1847) and 37 Castle St Holborn (from 1848 to 1875). The firm is best known for its work in conjunction with the maps issued by the Society for the Diffusion of Useful Knowledge or, as it is more commonly known, the S.D.U.K. However, they also engraved a large corpus of work for the British Admiralty , as well as issuing several important maps of India and multiple issues of the Royal Atlas.