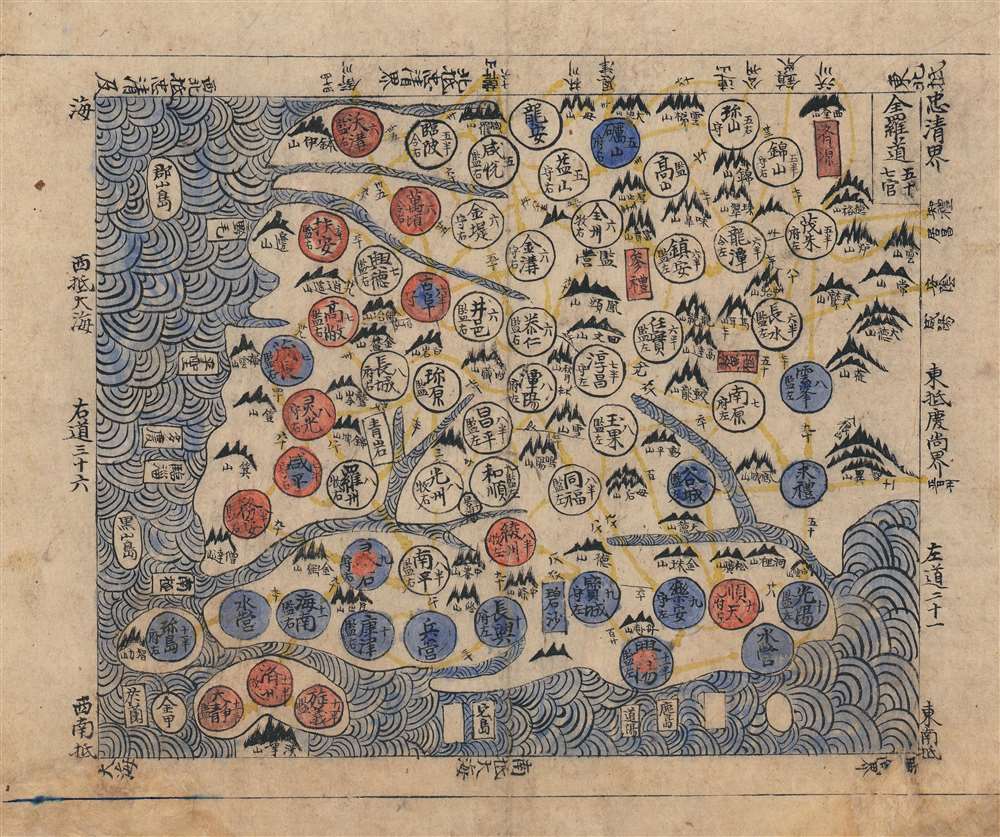 This is a unique c. 1850 map of Jeolla Province (全羅道) published in Korea during the late Joseon period (1392 – 1897). It provides substantial geographic and administrative information on Jeolla, one of the eight traditional provinces of Joseon.

This map was produced using a combination of engraved woodblock printing and hand-coloring. The names of towns, cities, and other administrative units are either circled or written in a box. Those that are circled include a number (using the traditional Chinese system 一, 二, 三, and so on) followed by a character (府, 守, 監, 令, 營, 官) referring to the presence of government offices and/or garrisons. These characters are then followed by characters meaning 'left' (左) or 'right' (右), a system of bureaucratic ranking in the Joseon system. The meaning behind the color coding of cities and towns is not entirely clear, but may distinguish military (blue) and civil (red) administration.

The names of mountains, islands, and sub-provincial administrative units are also noted. Text in the margins indicates what features are located in those directions (waterways, mountains, neighboring provinces), including the distances to Gyeonggi and Gangwon, the centermost provinces of Korea that included Seoul (then Hanseong or Hanyang).

Major rivers are clearly designated in blue while roads appear as yellow lines connecting major settlements, including Jeonju (全州), the provincial capital, Gwangju (光州), and Suncheon (順天). Several large and important islands are noted off the coast, including Jeju (濟州) and Jindo (here as 珎島, using a variant of 珍). In the late Joseon Dynasty, Jeolla was the rice producing heartland of Korea, also making it an area with a relatively large population. Though in some respects the area was wealthy as a result of the vitally important crop, society was highly unequal, with a thin echelon of scholars, government officials, and professionals being dwarfed by a much larger population trapped in a system of slavery (hereditary debt bondage).

This map most likely dates from the latter period of the Joseon Dynasty (see discussion below), a period when Korea encountered one crisis after another. Famines, uprisings, factional infighting at the court and among officials, and foreign invasions struck in succession or simultaneously. Capable governance and limited reforms allowed Joseon to stave off some of these threats, even defeating back-to-back French and American military expeditions in 1866. But Korea's isolationist policies and lack of more thoroughgoing reform left it vulnerable, and Japan gradually expanded its economic, political, and military influence until Korea became a virtual colony and then was annexed outright in 1910.

Jeolla – A Legacy of Resistance

As Jeolla was a strategically and economically important province, both land (兵營) and naval (水營) forces are present along the coast here. During the Imjin War in the 1590s, when Japanese samurai invaded and overran much of Korea, Jeolla became the headquarters of Korean resistance, led by the brilliant naval commander Yi Sun-sin (이순신, 李舜臣, 1545 - 1598). In the late 19th and 20th century, Jeolla carried on this legacy of patriotism and resistance, being the main or a major base of the Donghak Peasant Revolution in 1894 (which precipitated the First Sino-Japanese War), the Uibyeong 'righteous armies' and independence activists who resisted Japanese colonialism, Communist-aligned rebels and activists in the late 1940s and during the Korean War, and democracy activists in the 1970s – 1980s, who were massacred following the Gwangju Uprising in May 1980.

The exact provenance of this map is unclear. The phrase Yeojido (or in Chinese Yu ditu, 輿地圖), which could be translated as 'atlas,' was common in the title of maps and map collections at least since the Yuan Dynasty in the 13th-14th centuries. There are several works published in Korea bearing the title Yeojido dating from the 17th to the late 19th century that contain maps resembling this one. Often these collections contained maps of China, Japan, and other East Asian territories (usually under the title 大東輿地圖 or 天下輿地圖). These collections, very rare themselves, are held by the Library of Congress, Harvard University, the National Library of Korea, and the Nichibunken (International Research Center for Japanese Studies).

This map most closely resembles those in two collections held by Harvard University: the first, titled World Atlas (天下輿地圖, Cheonha Yeojido, OCLC 1252343134) was published in the early 18th century, and the second, titled Atlas of Korea (韓國輿地圖, Hanguk Yeojido, OCLC 37161862), was published in 1893 by Kim Hong-gyu (金鴻圭, 김홍규). However, the present map differs somewhat from the maps of Jeolla in those works in several respects, including the coloration, the elaboration of mountains and waterways, and other similar details. While it could date to as early as the 17th century, given the relative high level of elaboration, it more likely was produced at some point in the early-mid 19th century.