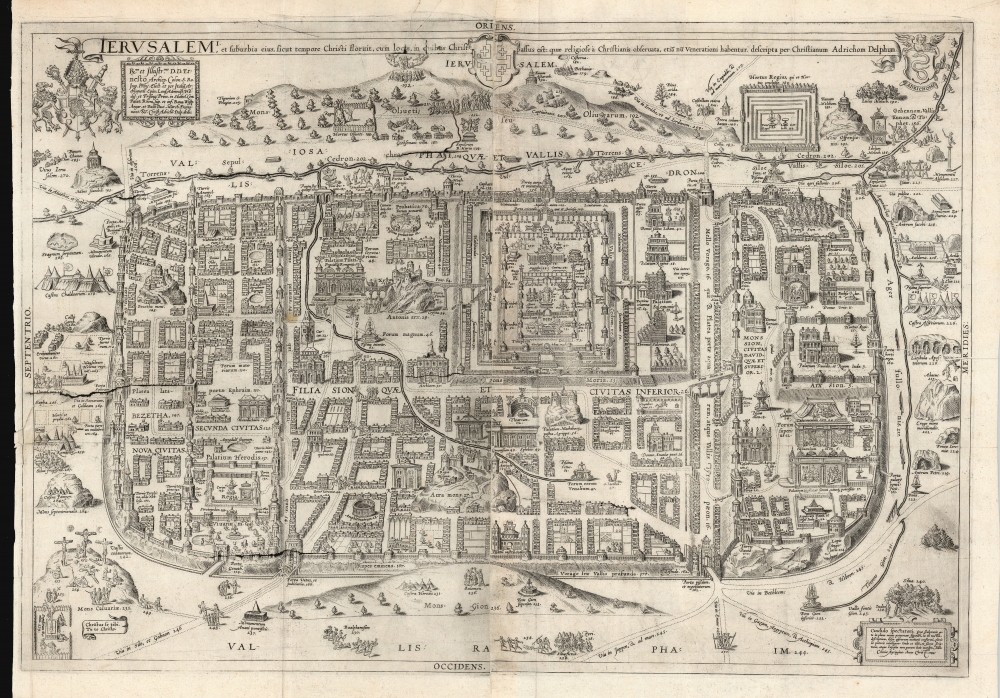 This is an elegant example of Christian van Adrichem's influential 1584 plan of the Biblical Jerusalem. It was included in his 1584 Theatrum Terrae Sanctae, a Biblical atlas intended to provide visual structure to Catholic catechism - not only to inform the religious scholar, but to provide the basis for a sort of 'virtual pilgrimage' to the holy sites of Jerusalem when actual travel there was, for most, utterly impossible.

For such an atlas, the actual lay of the land in Palestine and Jerusalem was not as relevant as conformity to scriptural description of those regions, and in this respect Adrichem's plan was unparalleled in its usefulness. The Holy City is here portrayed in a rectilinear form, divided in three major historical zones, and listing 270 specific locations tied to Biblical events both inside the city and out. Adrichem's plan was influential. It would be copied later by Jodocus Kramer, and famously by Braun and Hogenbgerg who includes it in their 1588 city atlas. Jansson retained the Braun and Hogenberg plate, reworking it for inclusion in his own 1657 town book.

Stations of the Cross

More importantly, Adrichem's plan was instrumental in codifying elements of Christian veneration of the Holy City, in particular the Stations of the Cross. Catholic practice had, since the Middle Ages, incorporated the reenactment by the faithful of the Via Dolorosa, the route followed by Jesus on the day of Crucifixion. Pilgrims to Jerusalem would follow the route through the Holy Land, but with the expansion of the Turkish Empire such travel was impossible for most. Many Christian cities began to assemble pilgrimage routes locally to allow pilgrims to follow a metaphorical Via Dolorosa without dangerous travel to distant lands. Churches and cathedrals would illustrate the Stations of the Cross - the different scenes along the Via Dolorosa - in their architecture and decoration. There was little system to this, however, and broad differences between different localities. Adrichem's text and plan of Jerusalem provided a model that all could follow, and that the faithful could practice even from the comfort of home, in a sort of 'Pilgrimage of the Mind.'

Adrichem's plan was first engraved to two plates in 1584, and remained in print for over a century. A second state with a date of 1682 is recorded, however it must be said that both plates began to exhibit cracking in a gradual way; thus it would be possible for a great many intermediate states to be identified. These have unfortunately not yet been recorded, but examples with varying levels of this cracking appear on the market. The map is well represented in institutional collections.