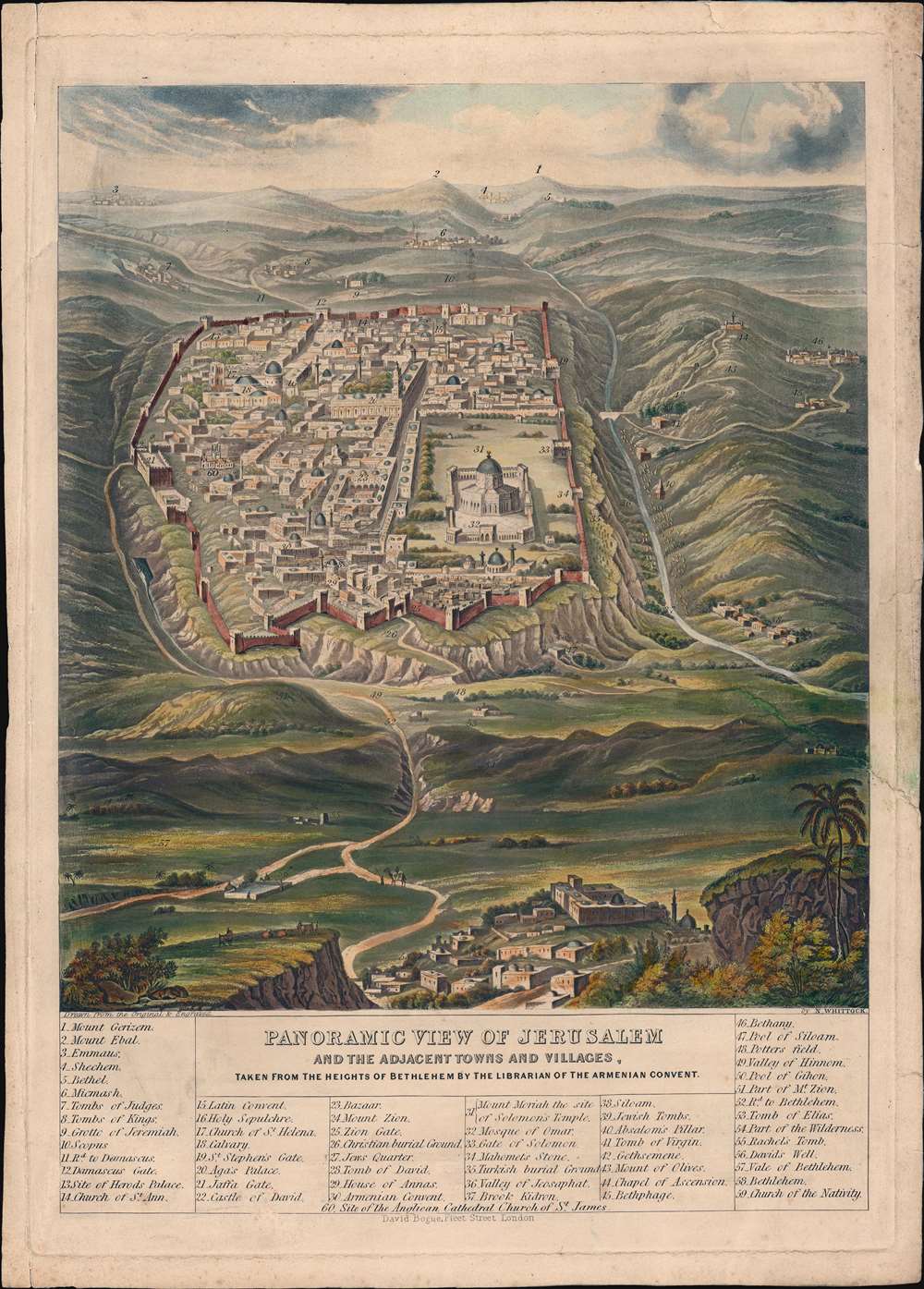 A very attractive 1845 view of Jerusalem issued by Nathaniel Whittock. The view, purportedly drawn by the Librarian of the Armenian Convent, looks northward on Jerusalem from a hill to the south, in Bethlehem. The city walls, Dome of the Rock, and the Church of the Holy Sepulcher are recognizable.

This second edition of the view was issued to capitalize on English enthusiasm over the construction of the Anglican Cathedral Church of St. James - today known as Christ Church - the first Anglican church within the Old City of Jerusalem (item no. 60). The construction of the church had a long and fraught history. It was initially conceived in 1834, but permission was not granted by Wali Muhammad Ali of Egypt (1769 - 1849), who seized Jerusalem from the Ottomans in 1831. This began a period of instability in Jerusalem that did not end until 1840, when with English help, the Ottomans retook Jerusalem. Among the concessions the English requested in return for military assistance was permission to build the Anglican Church. Construction took 9 years, during which time three successive architects managed the project. Initially named the Apostolic Anglican Church, it was consecrated as Christ Church on January 12, 1849, by Bishop Samuel Gobat (1799 - 1879). The Church sits in the Armenian Quarter of the Old City and today has a large following of English speaking Jewish Christians.

This map was drawn and engraved by Nathaniel Whittock. It was published by David Bogue in London. There are editions from 1842 and 1845. The first edition in 1842 was published jointly by Charles Tilt (1797 - 1861) and Bogue, and featured 59 named locations. The second edition was published in 1845, after Tilt's retirement, and was published by Bogue alone. That edition - represented here - adds a 60th location, the site of the Anglican Cathedral Church of St. James. The first edition appears on the market from time to time, but the second edition - as here - is quite rare.

Nathaniel Whittock (January 26, 1791 - August 12, 1860) was an English landscape, map, and topographical engraver active in London in the first half of the 19th century. He was best known for aerial perspective Bird's-eye Views with several important views of English and English Colonial cities in his corpus. Whittock was born in Westminster. His early education is mired in obscurity, but from 1824, he appears as 'Teacher of Drawing and Perspective, and Lithographist to the University of Oxford' - a significant posting. He worked for academic community of Oxford, publishing several views for the Ashmolean Museum. In 1828, he relocated to London, setting up shop in partnership with Edward Goodman as 'Whittock and Goodman'. This relationship was formally bought out by Whittock and dissolved on November 212, 1829. By the early 1830s, he was established in his own lithography studio at 24 Garnault Place, Spa Fields, Islington, London. In 1848, he partnered with his cousin Henry Hyde, relocating his operations to 34 Richard Street, Islington. This relationship lasted until his death in 1860. Learn More...


David Bogue (October 16, 1808 - November 1856) was a Scottish publisher and printseller active in London in the first half of the 19th century. Bogue was born in East Lothian, Scotland, from a humble farming. family. Not suited to working in the fields, he apprenticed to Thomas Ireland, a bookseller in Edinburgh. When Ireland died, in 1836, Bogue moved to London where he took a position under the bookseller Charles Tilt (1797 - 1861). Tilt took him into partnership and by 1843, had retired, leaving the business to Bogue. Bogue was a careful but prolific publisher, issuing, among other important works, Isaac Walton’s The Complete Angler. He also worked extensively with the artist, engraver, and humorist George Cruikshank (1792 - 1873), also a Tilt prodigy. Bogue died young, at just 48. Tilt, still alive at time, helped to settle Bogus affairs. By 1859, most of Bogue’s copyrights and stock, as well as the shop, had been taken over by William Kent. Learn More...

Good. Map exhibits some edge wear and cracks, including one tear extending from the right into the view about 1 inch - located just above the palm tree in the lower right. All tears stabilized.