1572 Braun and Hogenberg Map of Jerusalem 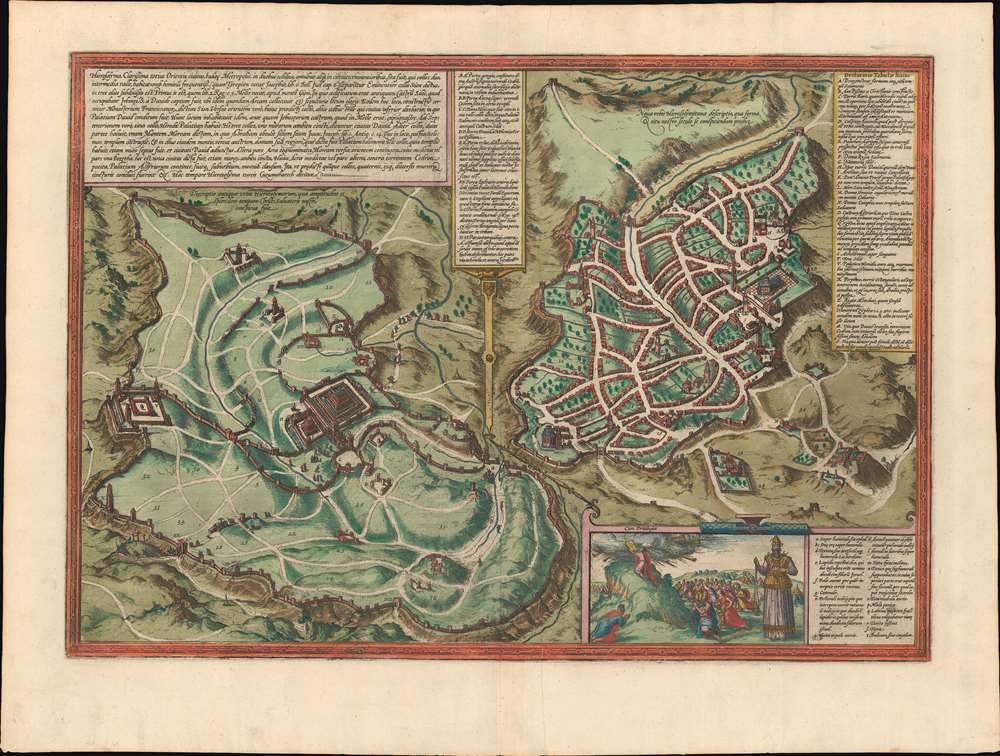 1572 Braun and Hogenberg Map of Jerusalem

A double-view that create a connection between the Jerusalem of the 1570s and Biblical Jerusalem.

This is a 1572 Georg Braun and Frans Hogenberg double-view of Jerusalem depicts Biblical Jerusalem and the modern city during the 16th century. Biblical Jerusalem appears on the left 'in its full splendor'. In the lower left, the procession of Jesus to Golgotha is illustrated and Judas is shown hanging from a tree outside the city walls not far from this procession. The Temple Mount, in all its glory, dominates the center of the view of the ancient city and numerous other monuments are included as well. The city's vast system of fortifications is also illustrated and each of the city's many gates are identified by pairs of capital letters which correspond to a key in the upper right corner.

A view of Jerusalem as it was in the late 16th century, when Braun and Hogenberg created this stunning piece, is situated on the right side of the sheet. Monuments and other locations throughout the city are labeled using both capital and lower-case letters that correspond with a table located on the right side of the view. Some of these monuments are illustrated in both views, creating a connection between the ancient city and its modern iteration. A brilliant concept, this allows the viewer to feel as if they can almost touch Biblical Jerusalem, both by being in possession of the map itself, and by visiting the sites that survived the centuries and still stood in Jerusalem at that point in history. An inset situated in the lower right corner illustrated Moses receiving the Ten Commandments on Mt. Sinai. Aaron is also illustrated in the inset dressed in extravagant garments and other accoutrements. A table next to Aaron identifies all the garments and other objects worn or held by Aaron.

This double-view was drawn by Georg Braun and Frans Hogenberg and published in their Civitates Orbis Terrarum, the most famous and influential 16th century book of town plans.

Georg Braun (1541 – March 10, 1622) was a German deacon, viewmaker, and typo-geographer based in Cologne. Along with Franz Hogenberg (1535 - 1590), Braun is best known for his publication of the highly influential city atlas Civitates Orbis Terrarum. The six volume work, with some 546 views, was published between 1572 and 1617 and intended a companion to Abraham Ortelius' Thatrum Orbis Terrarum - thus certain obvious stylistic similarities. In compiling the Civitates Braun took on the role of editor while most of the engraving work was completed by Franz Hogenberg. Braun died, as he was born, in Cologne.