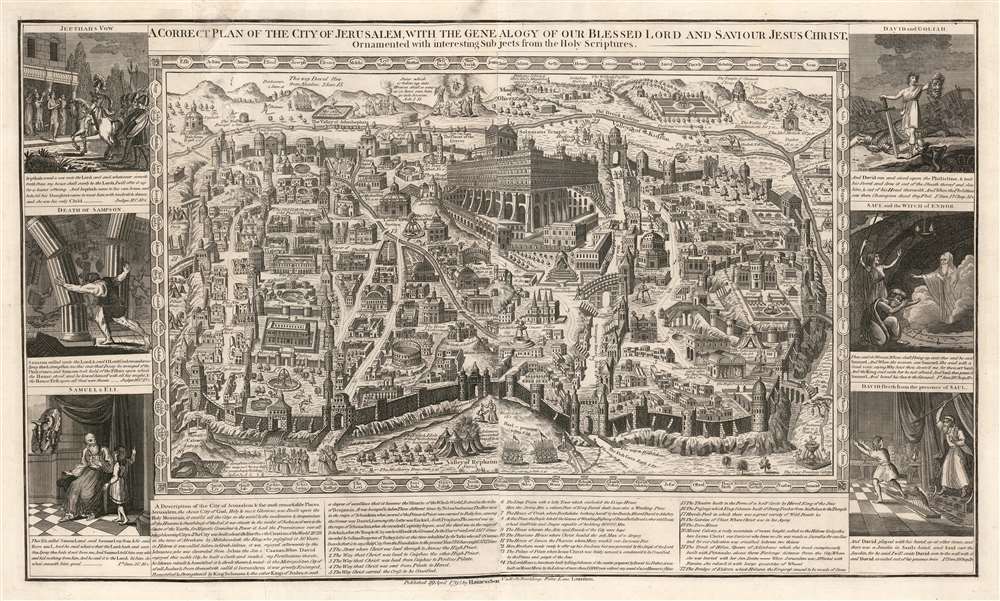 Extremely Rare and Dramatic Bird's Eye View of Jerusalem with an Abundance of Scriptural References
$7,500.00

The dramatic bird's eye view is reminiscent - in both orientation and purpose - of the Adrichom plan; oriented to the north and detailing the city walls and monuments, including Solomon's Temple, Herod's Palace, the Garden of Gethsemane, Mount Calvary, the Mount of Olives, and many, many others. In all, it represents a narrative of Biblical history, drawn from both testaments. It is densely decorated with vignettes with relevant Biblical chapters and verses noted by them. The descriptive text at the bottom relates the history of the city, and includes a key to the Stations of the Cross, also numbered on the map. Six large, dramatic vignettes border the engraving, seemingly chosen less for their thematic connection and more for their dramatic and moral content: Jepthah, returning home after his victory against the Ammonites, discovering that he has bound himself by oath to sacrifice his only daughter as a burnt offering; Samson, pulling down the house of the Philistines as a final act of sacrifice; Samuel, passing on to Eli the prophecy that his family would suffer divine punishment for their sins; David, displaying the severed head of the Philistine champion Goliath and setting his army to rout; The Witch of Endor conjuring up for Saul the ghost of Samuel (to provide similar news to that which he had already told Eli) and a remarkable scene of, Saul, javelin in hand, making to 'smite David even to the wall' as David, his harp clattering to the floor forgotten, as he 'avoided out of his presence.' Twice.

While we see no evidence of later issues of this specific map, the Haines family appears to have made use of its imagery in later publications: we find a mezzotint edition of the 'Saul and the Witch of Endor' vignette under the Haines & Son imprint; it appears likely that this treatment was also afforded the other views appearing on the elder Haines' maps.

This map was published by John Haines and Sons from their offices on Fetter Lane, London. No engraver is identified leading us to believe the map was engraved by Haines himself. This is an extremely rare piece. The OCLC places but one example, located at the British Library. There is no market history in the past 50 years.

John Haines (fl. 1795 - 1809) was a London printer and publisher. Operating as Haines and Company (and Haines and Son,) his specialty was the production of inexpensive mezzotints on religious or moralizing themes. His cartographic output, however, appears to have exclusively been separately-issued, large, two-sheet wall maps. Haines' mapmaking enterprise does not seem to have been abundantly successful: very few of the house's works survive in either institutional collections or on the market. Learn More...