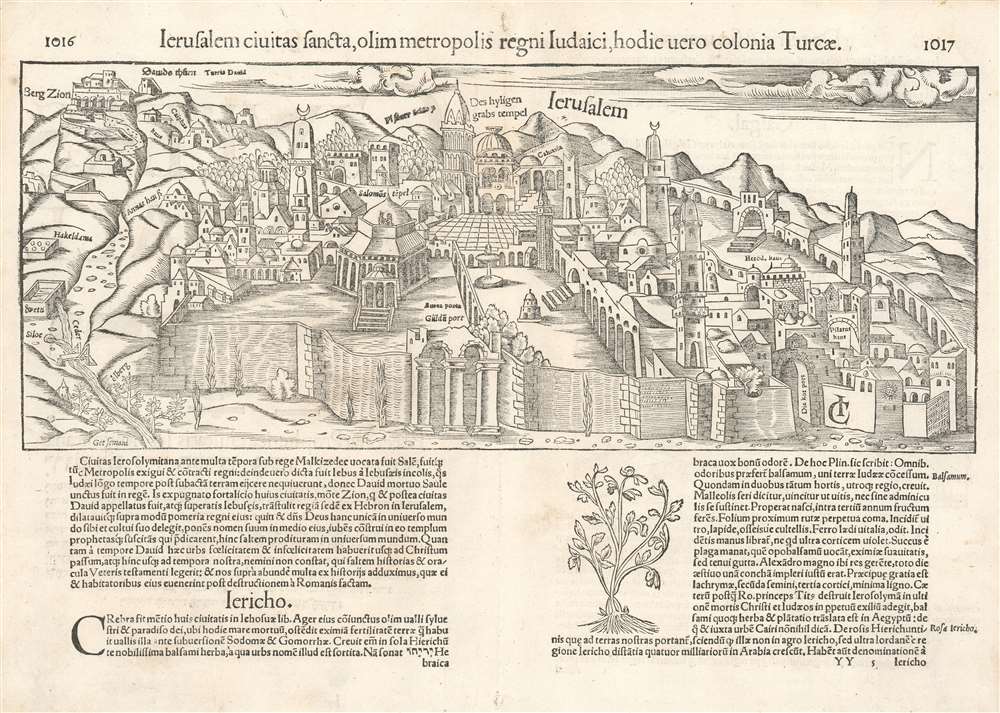 One of the Earliest Contemporary Views of Jerusalem

One of the earliest printed views of Jerusalem, executed in woodcut by Jacob Clauser for the Munster's Cosmographia, this example appearing in a 1559 Latin edition of the monumental work. It is one of the earliest available of the city. Unlike most early depictions, this bird’s-eye view is not intended as a purely retrospective depiction of the ancient city, but rather a modern view, showing the city at the time of publication. That said, the map is the design of a devout Christian, and so many of the features shown are those that would be of primary interest to Christian pilgrims (actual or purely armchair travelers.) Named are Mount Zion, the church of Saint Anne, and King David's tomb. The temple of the Knights of the Holy Sepulchre is shown. The court of Pilate, the palace of Herod, the Garden of Gesthemane and the Akeldama are also marked. As stated in the title, the city was at the time occupied by the Ottoman Empire. The Dome of the Rock is depicted centrally, and is clearly a mosque, but retains the name of the Temple of Solomon. The whole of the city is shown embraced by its ancient walls, with several of its famous gates named.

Munster's Cosmographia UniversalisWas published in German in 1544, the first of many editions. Its first Latin edition was 1550. Of these there were five others prior to the replacement of many of the images and maps for the new edition of 1588. Munster's work was extremely popular, running to over fifty thousand copies over a long printing history. Examples produced 1578 and prior are prized over the updated woodcuts produced after that date.