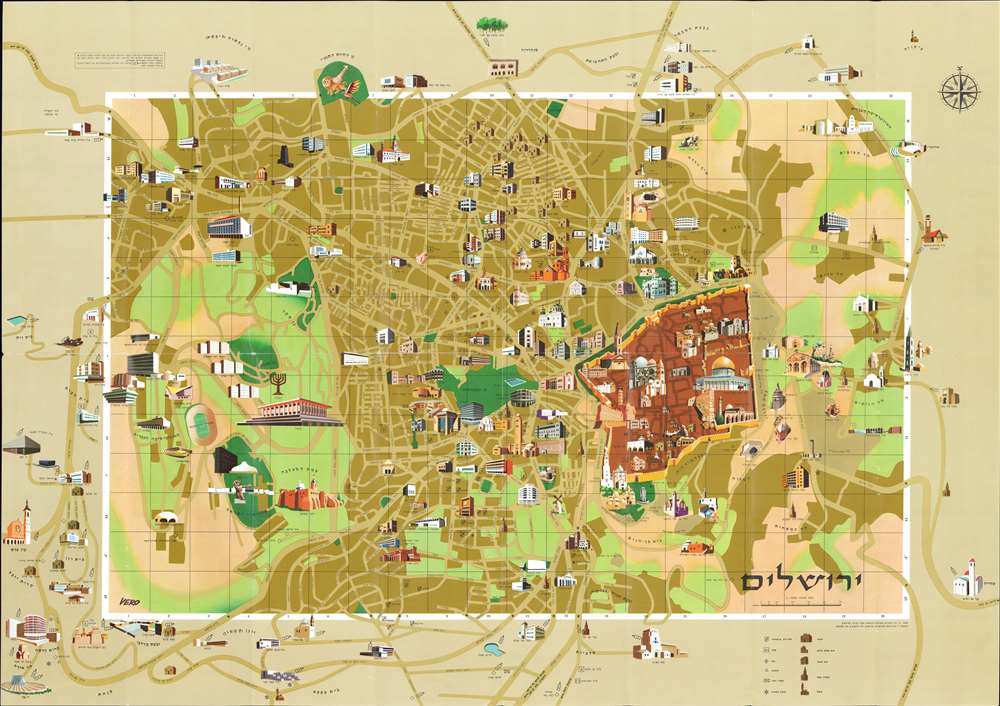 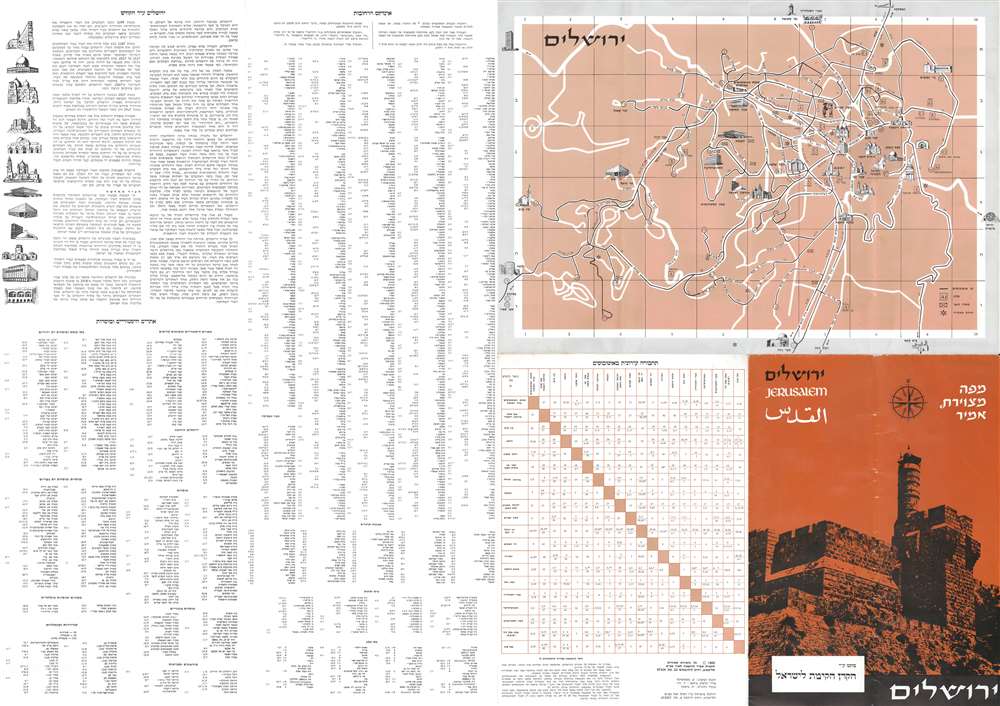 Religious and secular sites around Jerusalem.
$250.00

This is a 1969 Radu Vero pictorial map of Jerusalem in Hebrew. With the Old City just to the right of center, illustrations of Jerusalem's many sites dominate the piece. Shaded brown, the Old City stands in stark contrast to the rest of the city, which appears in tan with green highlighting the city's gardens and parks. The Dome of the Rock, the Western Wall, Al-Aqsa Mosque, 'David's Tower', and the Church of the Holy Sepulcher are among the historic sites named. Numerous additional locations are illustrated outside the Old City and range from government ministries, hotels, schools, convents, and synagogues to famous sites, such as the Hebrew University, the Israel Museum, and the Knesset. Religious sites including the Tombs of the Prophets, David's Tomb, the Sanhedrin Tombs, and the Tomb of the Kings are illustrated and labeled as well. Intriguingly, numerous sites appear outside the map's 'borders', including Yad Vashem, the British Military Cemetery, several hospitals, and a pair of monasteries.

This map was drawn by Radu Vero and published by the Amir Publishing Company of Tel Aviv in 1969. It was printed by the Yefet Printing House in Tel Aviv. We have located a bilingual English and Hebrew edition of this map, as well as one in Dutch. An example of this map is part of the collection at the National Library of Israel, along with examples of the other two editions.

Radu Vero (October 20, 1926 - February 21, 2007) was a Romanian-American illustrator, writer, consultant, and educator. Born in Bucharest, Romania, Vero received a Bachelor of Arts in Architecture from the Bucharest Institute of Architecture in 1951. He worked as a freelance illustrator in Bucharest from 1952 until 1961, when he emigrated from Romania to Israel. Then he worked as a freelance illustrator in Israel until 1973, when he immigrated to the United States. Again, Vero found work as a freelance illustrator after arriving in New York and then became a member of the faculty at the Fashion Institute of Technology in 1982. Vero became a naturalized U.S. citizen on January 21, 1987. At the height of his career, Vero was considered to be one of the top five medical and scientific conceptual illustrators in the U.S. He was also credited with discovering a new set of curves, called cubals, in analytic geometry. Vero is probably best remembered as the author of the seminal work Airbrush: The Complete Studio Handbook. Learn More...

Very good. Exhibits light wear along original fold lines. Text and map of Old City printed on verso.
Looking for a high-resolution scan of this?