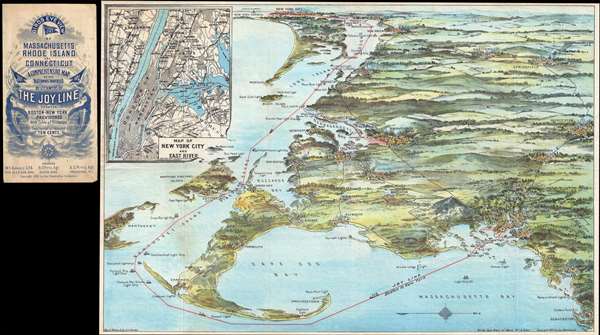 Birds eye view of Massachusetts, Rhode Island and Connecticut. A comprehensive map of the waterways traversed by steamers of the Joy Line between Boston-New York, Providence, with table of distances.
1905 (dated)     14 x 21 in (35.56 x 53.34 cm)

This unusual 1905 chromolithograph bird's-eye view of Cape Cod, New York, and Long Island, was issued by George H. Walker to promote the Joy Line. The Joy Line was a regular steamship ferry services connecting Boston, Massachusetts; Providence, Rhode Island; and New York, New York. The view looks westward from a position high above Massachusetts Bay, with New York City and Long Island appearing in the distance. Cape Code looms prominently in the foreground with Martha's Vineyard and Nantucket just to the south. Block island is shows, both two lights. On Long Island the Montauk and Greenport are noted. Along the Connecticut coast, Stonington, New London, New Haven, and Bridgeport are all noted. In the distance the Statues of Liberty and New York City are visible. The Joy Line Dock, pier 35, is noted in red, as is the route of the Joy line through the Long Island Sound, Vineyard Sound, and around Cape Cod, to Boston.

In the upper left, there is a detail map of New York City, including Manhattan, the Bronx, Queens, and Brooklyn. There too the route of the Joy Line appears in Red. Pier 35 is identified just under the Brooklyn Bridge.

Walker issued a number of views of the Boston area, but this view, with its peculiar orientation, is unusual. It is also quite rare. We are aware of only two other examples of this map, one in the archives at the Library of Congress, and another at in the Osher Map Library.

Very good. Accompanies original binder, from which it has been separated.