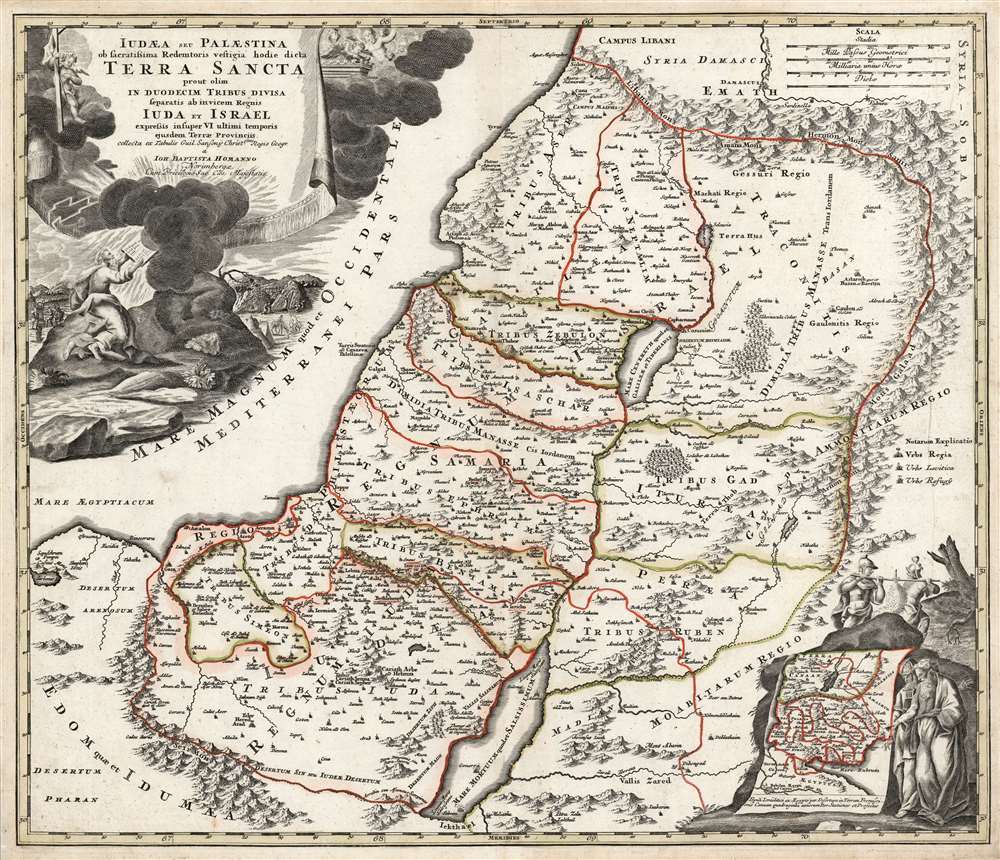 The Twelve Tribes of Israel, with vignettes of the Exodus.

This is a beautiful example of J. B. Homann's 1707 map of the Holy Land. As Homann noted in the map's title, it is derived from the work of the French mapmaker Guillaume Sanson (1633 - 1703). The map combines modern geographical information with place names drawn from Biblical history: specifically, the Exodus, and the settlement of the Twelve Tribes of Israel. It depicts the Mediterranean coast from Sidon (in modern-day Lebanon) to Alexandria (not named, but marked with Pompey's Pillar). The territories of the Tribes of Israel are marked, appearing on both sides of the Jordan. Mountains and forest regions are illustrated pictorially. Intriguingly, the Dead Sea contains the ruins of Sodom, Gomorrah, Adama, and Seboim - all destroyed for their sins.

The map is superbly engraved, with Biblical vignettes both in the title cartouche and in the lower right. The title cartouche is flanked with putti, several of whom are fluttering about the Ark of the Covenant, half-obscured by clouds. At the base of the cartouche, Moses receives the Ten Commandments from the burning bush - meanwhile, in the background, Israelites worship the Golden Calf. In the lower right is an inset map showing the path of the Israelites from Egypt to Canaan. Moses and Aaron consult the map. In the background, two of the dozen spies sent by Moses march by with a massive bunch of grapes set on their shoulders; judging by their positive, 'can-do' expressions, it would seem that these represent Joshua and Caleb.

This map was produced by Homann for inclusion in his Neuer Atlas as early as 1707. In 1715, Homann received an Imperial privilege for his Grosser Atlas, after which the privilege was added. This example, with the privilege, dates as early as 1715 but probably no later than the 1730s, as it still bears Homann's imprint and not that of his heirs. Homann's atlases are well represented in institutional collections. We see fifteen examples of this map cataloged in OCLC without the privilege; only two examples are noted with the privilege, and these are held at the Danish National Bibliotheque and the Royal Danish Library.