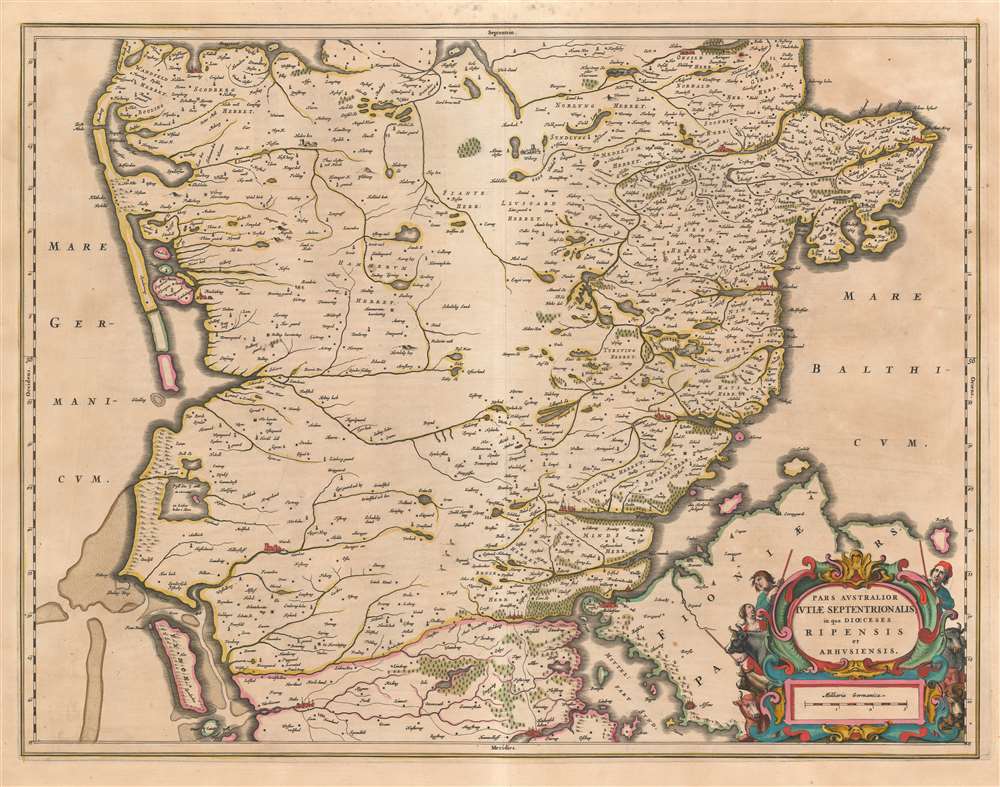 This is Joan Blaeu's 1659 map of southern-central Denmark, or the southern part of Jutland. It is among the scarcest of Blaeu's maps, appearing in a sole edition of the Novuus Atlas and subsequently in the Atlas Maior. It shows the Dioceses of Ribe and Aarhus, the Protestant sees administering the southern Jutland Peninsula from as far south as Haderslev and the island of Fionia, as far north as Onsild in the east and Lemvig in the west. The map is superbly detailed and engraved, typical of the younger Blaeu's work at its creative peak. There is a superb cartouche, behind which three cowherds and their bovine charges are trying unsuccessfully to hide.

Blaeu's cartographic source is not given. The inclusion of this map and the accompanying ones of regional Denmark in the atlas does coincide with the addition of the maps of Schleswig-Holstein, drawn by Johannes Mejer (1606 - 1674) and engraved for the atlas of that duchy he produced with Caspar Danckwerth. Mejer did produce a manuscript map of the Kingdom of Denmark, so it is possible that he may have provided the source for Blaeu's maps. However, Meyer's death in debt suggests that no great influx of cash from the house of Blaeu followed.

This map was printed first in 1659 for inclusion in the Spanish edition of Novuus Atlas, and was included without change in subsequent editions of the Atlas Maior. Three examples of the complete Nuevo atlas o Teatro del mundo are catalogued in OCLC. Six listings of the separate map in later issues appear. Only one example of the 1659 issue of the separate map is listed in an institutional collection, that of the Biblioteca Nacional de España.

Blaeu, J., Nuevo Atlas, (Amsterdam) 1659.     The classic Dutch atlas, whose publication ushered in the Dutch golden age of cartography. Willem Jansz Blaeu had been, since 1604, producing engraved maps for sale; these were separate issues (and all consequently extremely rare) until the publishing of Blaeu's Appendix in 1630 and 1631, which also included a number of maps purchased from the widow of Jodocus Hondius, (for example his famous iteration of John Smith's map of Virginia.) In 1634, he announced his intention to produce a new world atlas in two volumes, entitled Theatrum Orbis Terrarum, sive Atlas Novus (in an effort to invoke the successful work of the same title produced by Ortelius the previous century, while reinforcing the notion of it being a new work.) This work was published first in German in 1634, followed by Latin, Dutch and French editions in 1635. Blaeu's maps have always been noted for the quality of their paper, engraving and fine coloring, and this was the intent from the very start. The 1634 announcement of the upcoming work described it: 'All editions on very fine paper, completely renewed with newly engraved copperplates and new, comprehensive descriptions.' (van der Krogt, p,43) Many of the most beautiful and desirable maps available to the modern collector were printed and bound in Blaeu's atlases. Willem's son, Joan, would go on to add further volumes to the Atlas Novus, concurrently printing new editions of the first two volumes with additional maps, in effect making these new editions an entirely new book. Under Joan there would be nine Latin editions, twelve French, at least seven Dutch, and two German. This exceedingly successful work would be the mainstay of the Blaeu firm until 1661, at which point the work was supplanted by Joan Blaeu's masterwork Atlas Maior in 1662.

Very good. Some light toning and offsetting, else excellent with superb original color.