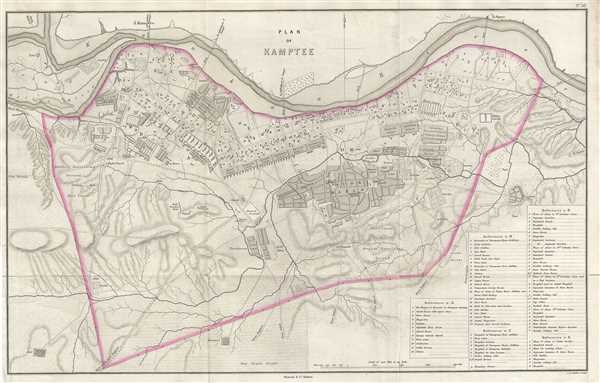 Plan of Kamptee near Nagpur, India, during British rule.

This is a lovely example of the 1854 Pharoah and Company map of the city of Kamptee in the Indian state of Maharashtra. It covers from the Kanhan River south to Ranala. The map details the military cantonment and notes streets, burial ground, bazaars, gardens, official buildings, and topography.

Kamptee, also known as Camp T for its shape, was founded as a military cantonment by the British in 1821. Still operating as a cantonment, today it houses the Brigade of the Guards, one of the oldest and most respected regiments of the Indian Army.

This map was engraved by J. and C. Walker and issued as plate no. 58 by Pharoah and Company in their 1854 Atlas of Southern India.