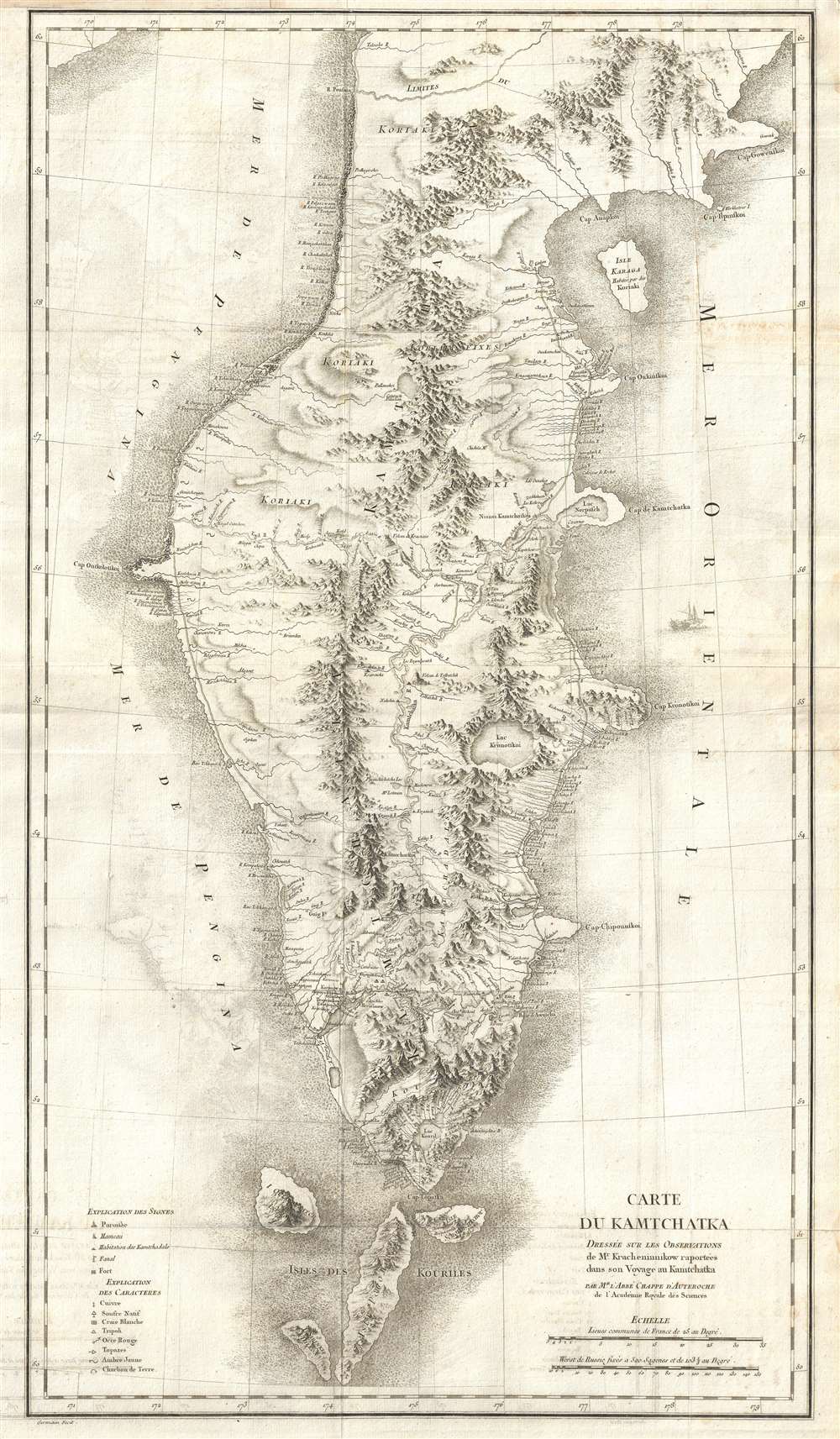 One of the finest obtainable early maps of Kamchatka.
$950.00

A stunning 1768 map of Kamchatka by Jean-Baptiste Chappe d'Auteroche and Stepan Petrovič Krašeninnikov. This map covers, roughly, from Korfa Bay south to the northernmost Kuril Islands, and from the Sea of Okhotsk to the Pacific Ocean. There is superb detail throughout, including beautiful profile renderings of inland mountain rangers, river systems, lakes, and roadways. When this map was issued Kamchatka was one of the most remote and sparsely inhabited places on Earth – it remains very much the same today.

The map was published to accompany Auteroche's narrative of his expedition to Tobolsk to observe the 1761 Transit of Venus, Récit du voyage que Chappe d'Auteroche effectua en Sibérie de novembre 1760 à août 1762. The cartography, as noted in the cartouche, is primarily derived from the 1731 – 1742 surveys of Stepan Petrovič Krašeninnikov, completed during Vitus Bering's Great Northern Expedition (1731 – 1742). It was engraved by Louis Germain. This is one of the finest obtainable early maps of Kamchatka.

Jean-Baptiste Chappe d'Auteroche (March 23, 1722 – August 1, 1769) was a French astronomer and explorer. He was born to a noble family of Auvergne, France. He entered the priesthood where is was able to dedicated himself to the study of Astronomy. he was appointed assistant Astronomer at the Royal Observatory and, on January 14, 1758, was admitted to the Paris Académie des Sciences. Auteroche is best known for his observation of the Transit of Venus in 1761 and in 1769. The scientific world at the time recognized an unprecedented opportunity to determine the size of the Solar System using exact observations of the Transits of Venus in 1761 and again in 1769. By applying the calculations associated with these transits in the light of Kepler's Laws of Planetary Motion, it was possible to determine for the first time the distance between planets. Auteroche's first expedition led him to Siberia, where is observed the 1761 transit from Tobolsk. He observed the second transit, in 1769, from Baja California in Mexico. On the return voyage the crew of Auteroche's ship were struck by Yellow Fever. With the exceptional of a single passenger, everyone on board, including Auteroche, died. That survivor managed to salvage Auteroche's notes and return them to the Académie des Sciences in Paris. Auteroche's notes and journals were published posthumously by Cesar Cassini de Thury.


Stepan Petrovič Krašeninnikov (October 31 1711 – November 11, 1755) was a Russian explorer, geographer, naturalist and ethnographer. Krašeninnikov was born in St. Petersburg and studied at the l'Accademia Slavo-Greco-Latina and later at the St. Petersburg Academy of Sciences. He was chosen to accompany Vitus Bering in the 1731 – 1742 Great Northern Expedition (Second Kamchatka Expedition) to explore the Siberian Arctic. As part of this expedition Krašeninnikov was dispatched to Okhotsk and Kamchatka to perform preliminary studies, a difficult task which he completed over the course of four years from 1737 – 1741. Krašeninnikov had spent ten years on the Great Northern Expedition before returning to Saint Petersburg in 1742. There he obtained his doctorate in ichthyology and was appointed a member of the Russian Academy of Sciences. In 1752, he went for his last expedition to the area of Lake Ladoga and Novgorod for research on flora. He died shortly after in 1755. He final research was published posthumously by David de Gorter.


Louis Germain (1733 – c. 1791) was French engraver, draughtsman, and painter active in Paris during the middle part of the 18th century. Little is known of his life but he appears to have produced few works. Most his engravings are architectural and landscape pieces.