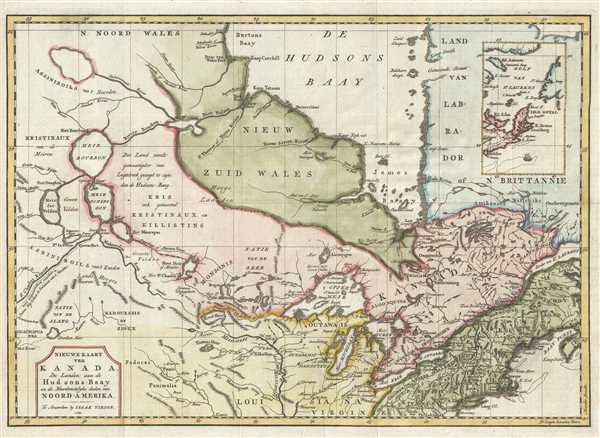 This is a 1769 Isaak Tirion map of Canada and the northern United States. The map depicts the region from Hudson Bay to the middle of the modern-day United States and from Lake Winnipeg to Labrador and Nova Scotia. The territories of New North Wales, New South Wales, and Labrador surround Hudson Bay. New North Wales and New South Wales were names adopted by British settlers in the region in the 18th century. Labrador, however, reportedly predates the use of either of those labels by more than a century. Several locations around Hudson Bay and James Bay are labeled, particularly rivers and islands, with Prince of Wales Fort located near Burton's Bay. Below New South Wales, eastern Canada is depicted in much more detail than western Canada, with a series of rivers and lakes illustrated in modern-day Quebec and Ontario. Trois Rivières is labeled, along with Quebec (Quebek) and all five Great Lakes. In the west, a grouping of three large lakes is depicted, with several rivers emanating from them. These lakes are most likely a curious depiction of Lake Winnipeg and its surrounding lakes. In the modern-day United States, New England is depicted in detail, with numerous locations labeled throughout, including nearly every colony (although no boundaries are evident). Numerous Native American tribes are included throughout the map, including the Iroquois, Sioux, and Algonquin. An inset map of Cape Breton Island (Isle Royal), the Gulf of St. Lawrence, Prince Edward Island, and Nova Scotia is located in the upper right corner.

This map was produced by Isaak Tirion and published in 1769.