1839 Bedford and Smith Map of Afghanistan from Kandahar to Herat 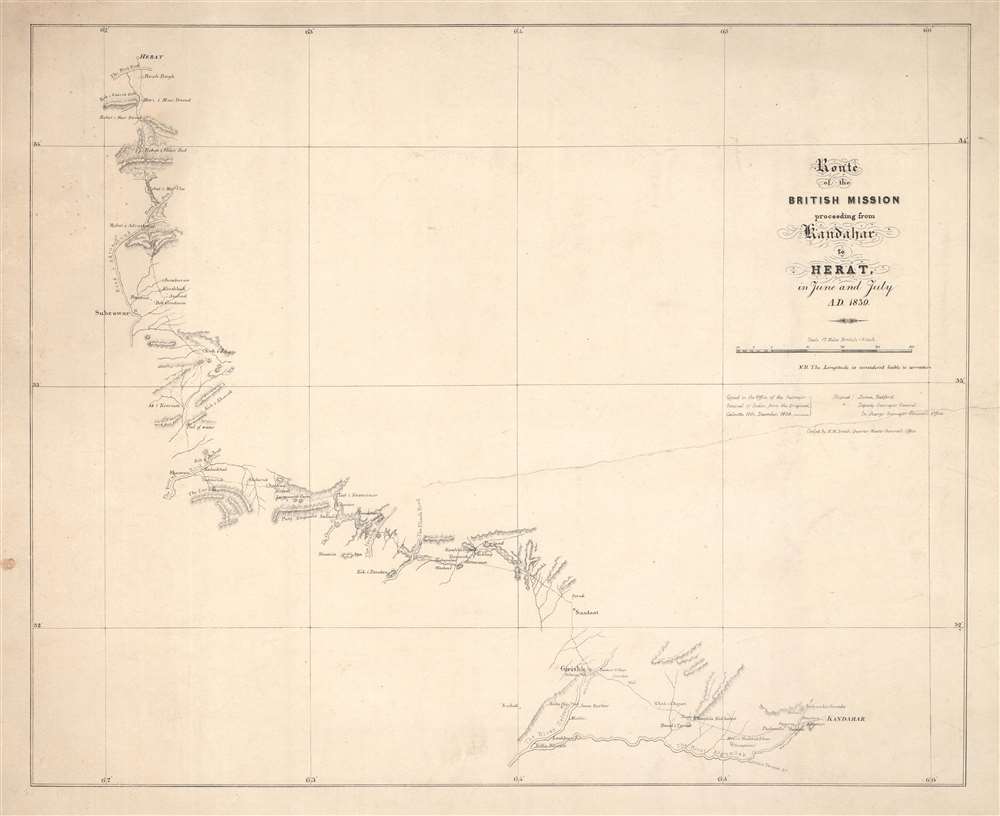 1839 Bedford and Smith Map of Afghanistan from Kandahar to Herat

This is an 1839 James Bedford and H.M. Smith map of Afghanistan from Kandahar to Herat in the first few months of the First Afghan War (1839 - 1842). Tracing the route of a British mission, the details of which have been lost to history, a thin line connects the two cities. At the time, only Kandahar is Afghan. Herat is ruled by its own Shah, the brother of a deposed Shah of Afghanistan. Roads cross the mission's route, and several villages are labeled. Little is known about the map itself or the mission it describes. It was likely driven by the recent siege of the city and its strategic importance. This mission also represents part of the great historical drama playing out between the Russian Empire and the British Empire in Central Asia known as The Great Game.

The Siege of Herat

Herat was an important independent city between Persia and Afghanistan. Under Russian influence, the Mohammad Shah Qajar (1808 - 1848) of Iran was convinced of Iran's claim to Herat. Thus, he launched an invasion of the independent 'city-state' in 1837. The siege lasted until 1838, when two events combined to force the Iranian Shah back to Tehran. These events, the failure of a Iranian attempt to seize Herat on June 24, 1838, and the arrival of a British force off the Iranian coast in the Persian Gulf, caused the Shah to back down and lift the siege on September 9, 1838.

Fought between the British East India Company and the Emirate of Afghanistan, the First Anglo-Afghan War was part of 'The Great Game,' a larger diplomatic confrontation between the British and Russian Empires. While Russia probably never seriously considered invading India, it was actively expanding into Central Asia. The British East India Company, and by extension the British Empire, nonetheless feared that the Russians would move through their Central Asian provinces, then through Afghanistan, into India, undermining British hegemony in South Asia.

In order to secure the Afghan frontier, the British sent an embassy to the Emir of Afghanistan, Dost Mohammad Khan, with whom they hoped to confirm an anti-Russian alliance. Although Dost Mohammad was interested in a British-Afghan alliance, both sides had conflicting interests. Afghanistan had recently lost Peshawar, its second capital, to the powerful the Sikh Empire, with whom the British were allied. Thus, the British had to choose to ally with either the Afghan, Dost Mohammad Khan (1793 - 1863), or the Sikhs. They believed the Sikh Empire, which maintained a powerful French-trained standing army, the Dal Khalsa, to be the greater threat, and so took a third path.

Unable to forge an alliance with Dost Mohammad (Barakzai), the British instead turned to the exiled former Emir Shah Shujah (Durrani; 1795 - 1842). Unlike Dost Mohammad, who was fierce, wily, and dogged, Shah Shujah had a reputation for indolence and cruelty, reportedly having a penchant for removing the noses, ears, tongues, penises, and testicles of his courtiers and slaves when they displeased him in the slightest. Nonetheless, the British considered him, for his very indolence, to be malleable and thus preferable to Dost Mohammad.

Grand Army of the Indus

The British mustered the massive 'Grand Army of the Indus', consisting of some 21,000 British, Indian, and Sikh troops and marched into Afghanistan from Punjab under the command of Baron John Keane. By March of 1839 they crossed the 4000-meter-high Bolan Pass and seized Kandahar on April 25, 1839. Cognizant of the harsh conditions of the region, they waited until the crops ripened in mid-June to begin further conquests. It was probably around this time that survey work for the present meticulously detailed map was completed. Often at great cost, the British Grand Army won most major engagements, but the dogged Dost Mohammad simply retreated further into the countryside and continued to wage a persistent guerilla war against the British.

Eventually the British decided they had achieved their objective and most of the Army returned to India, leaving just 8000 troops to support the Shah Shuja puppet regime. When Dost Mohammed escaped from prison in Bokhara and returned to Afghanistan the fighting again commenced. Eventually the main British Indian and Sikh force occupying Kabul along with their camp followers was almost completely annihilated while retreating in January 1842. The British sent an 'Army of Retribution' to Kabul but, by the end of the year, Dost Mohammad resumed his rule. The British called this war 'The Disaster in Afghanistan' and Dost Mohammad is reported to have said:

. The First Anglo-Afghan War was the opening salvo of the Great Game, which, one might argue, is still being fought over control of Afghanistan.

'The Great Game' was a diplomatic confrontation between the British and Russian Empires over Afghanistan and other territories in Central and Southern Asia. The conflict, rooted in long-standing animosity between Russia and Britain, revolved around Afghanistan, which, while lacking significant resources of its own, was strategically situated. For its part, Russia feared Britain was making commercial and military inroads into Central Asia, an area long within the sphere of influence of St. Petersburg. Britain, conversely, feared Russia making gains in India, 'the jewel in the crown' of British Asia. The escalating tensions led to several wars and proxy wars: The First Anglo-Afghan War (1839 - 1842), the First Anglo-Sikh War (1845 - 1846), the Second Anglo-Sikh War (1848 - 1849), and the Second Anglo-Afghan War (1878 - 1880), along with the Russian annexations of Khiva, Bukhara, and Kokand. Then, as now, Afghanistan proved a grinding stone upon which the world's great empires diminished themselves, none achieving a definitive victory despite committing staggering resources. The Great Game ended on September 10, 1895 with the signing of the Pamir Boundary Commission Protocols, which stabilized the border between Afghanistan and the Russian Empire.

The original map was drawn by the Surveyor General's Office under the supervision of James Bedford. This example of the map was copied at the Office of the Surveyor General of India on December 11, 1839, by H.M. Smith of the Quartermaster General's Office. We have been unable to find any references to the present map and only one reference to the source map exists. It is listed in A Catalogue of Manuscript and Printed Reports, Field Books, Memoirs, Maps, Etc., of The Indian Surveys Deposited in The Map Room of the India Office that was published in 1878.

James Bedford (18xx - 18xx) served as Deputy Surveyor General in India from 1832 until 1843 and had served since 1821. Under his influence, practices changed, and surveyors conducted scientific surveys using the compass and chain method before completing a Revenue Survey when working in the North West Provinces. Little else is known about his life and career. Learn More...

Good. Exhibits some toning and soiling. Closed tear extending thirteen inches into printed area from right border professionally repaired on verso. Blank on verso.
Looking for a high-resolution scan of this?