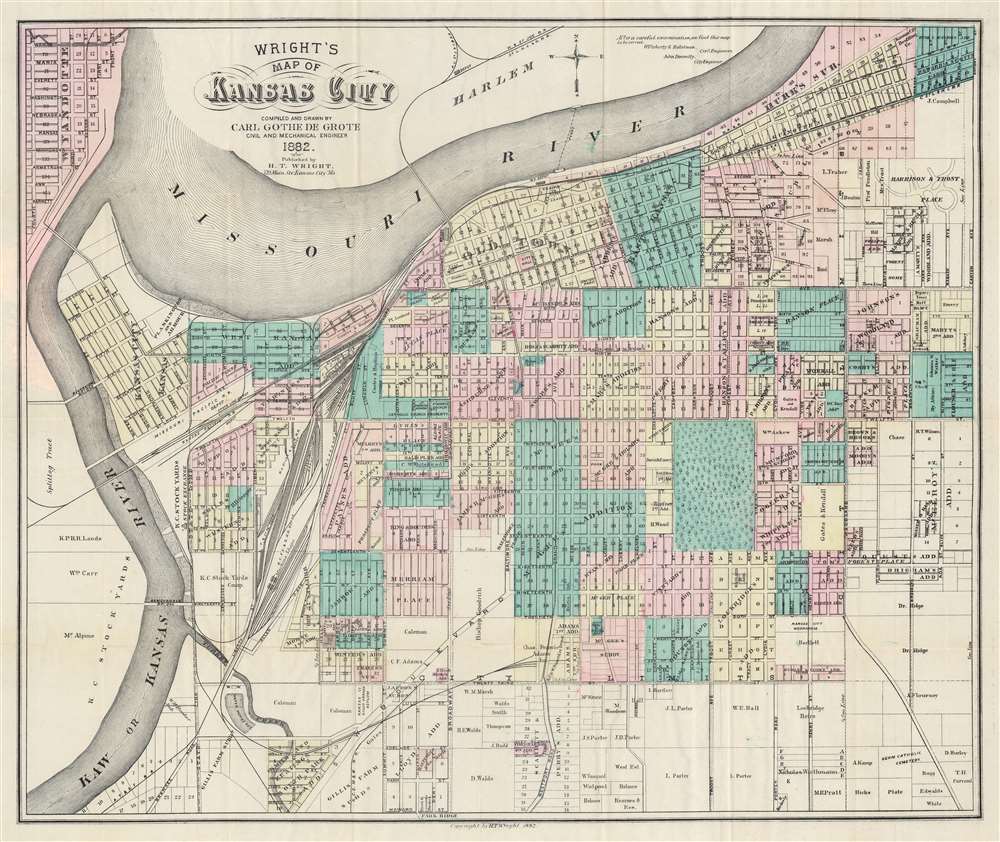 Published in Kansas City in that city's moment of most expansive growth.
$1,100.00

This is a rare 1882 Carl Gothe de Grote and Harry T. Wright city map of Kansas City, Missouri - published in Kansas City! The map captures Kansas City in its moment of most explosive growth, illustrating the engines of said growth including urban development plans, railroads, and the Kansas City Stockyards.

Wash color highlights additions (Smart's Addition or Rice's Addition for example), subdivisions, and neighborhoods throughout. These additions underscore the incredible growth Kansas City during the second half of the 19th century. A dotted and dashed line to the left of the 'West Kansas City Addition' and close to the confluence of the Kansas and Missouri Rivers marks the state line. Kansas City, Kansas is labeled just to the left of the state border. Railroads, such as the 'Kansas City, St. Joseph, and Council Bluffs Railroad', the 'Hannibal and St. Joseph Railroad', and the 'Atchison, Topeka, and Santa Fe Railroad', traverse the city and railroad depots, machine shops, and other affiliated buildings are identified.

Following the American Civil War (1861 - 1865), Kansas City expanded explosively. In 1869 Hannibal and St. Joseph Railroad opened a bridge across the Missouri River at Kansas City. With fast railroad access to lucrative markets, Kansas City's population quadrupled over the subsequent 50 years. The city officially changed its name to Kansas City in 1889.

This map was compiled and drawn by Carl Gothe de Grote and published by Harry T. Wright in 1882. We note five examples of the 1882 edition cataloged in OCLC: Yale University, Harvard University, the University of Missouri-Kansas City, the Denver Public Library, and the Bibliothèque nationale de France. Subsequent editions published in 1884 and 1886 are also cataloged in OCLC.

Harry T. Wright (March 7, 1845 - December 31, 1907) was an American bookseller, stationer, and publisher. Born in Xenia, Ohio, Wright moved to Kansas City when he was twenty-one years old and opened a small news stand in the post office. This stand proved to be the beginning of the Kansas City Book and News Company, founded by Wright a few years later and operated by him until 1901 when he was forced to retire due to health reasons. Wright married Lila Turner in July 1872, with whom he had at least three children. Learn More...


Carl Gothe de Grote (c. 1824 - 1xxx) was a Prussian civil engineer and architect. Born in Prussia, Gothe de Grote arrived in the United States at some point in the mid-late 19th century. He was in charge of building the first Temple Emanu-El in Dallas, Texas at Commerce and Field that was dedicated on May 28, 1876. By 1880 he was living in Kansas City and working as a civil engineer. He created a city plan of Kansas City published by H. T. Wright in 1882. Wright is noted as leaving Kansas City in 1882 and being robbed of his pocketbook on the train between Kansas City and Topeka. A notice in Las Vegas, New Mexico Las Vegas Gazette informs readers that 'Carl Gothe de Grote, the architect, went to Watrous Sunday to superintend the construction of a new building there'. Learn More...