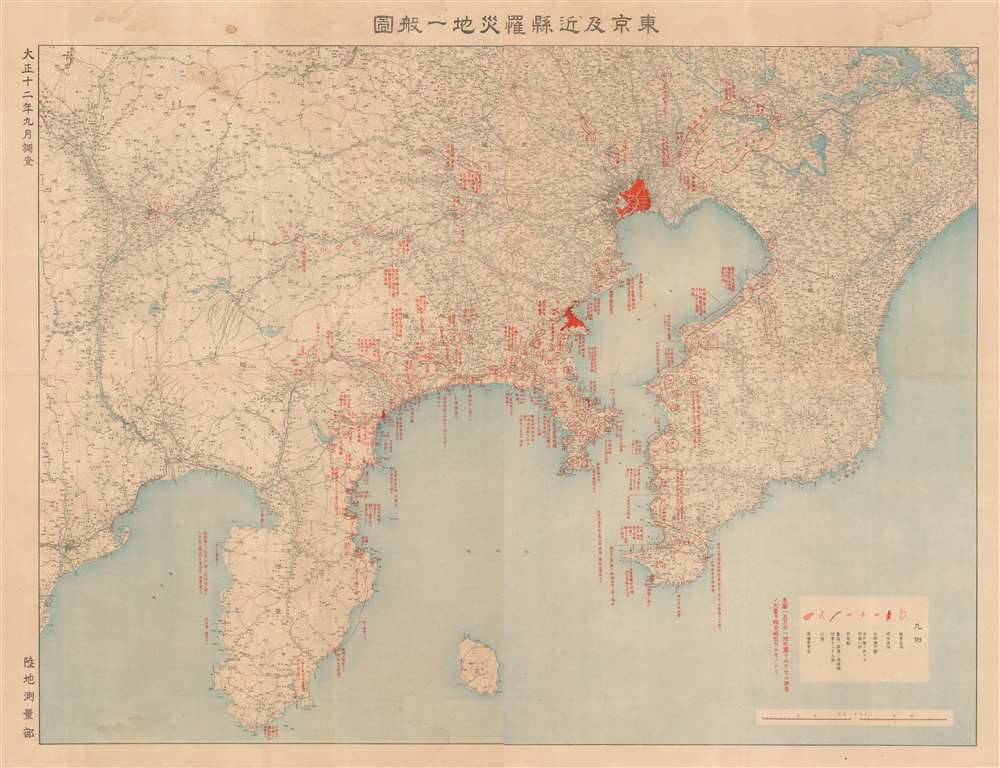 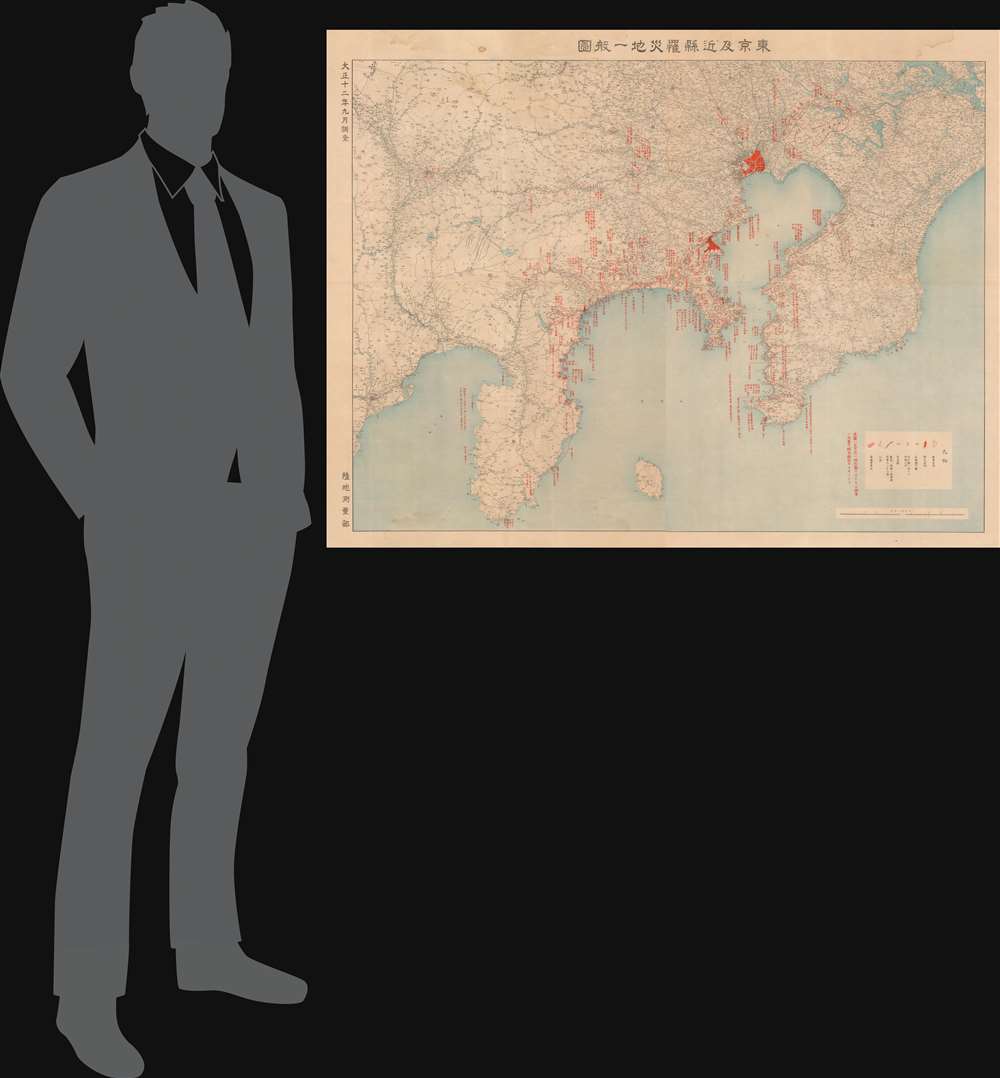 The immediate aftermath of the Great Kanto Earthquake.
$1,250.00

This is a stark 1923 map of Tokyo, Yokohama, and the Kanto region produced by the Imperial Japanese Land Survey Bureau depicting areas severely damaged or destroyed by the Great Kanto Earthquake and consequent fires. It was issued shortly after the disaster, as the government struggled to suppress fires, quell social unrest, and assess the widespread damage.

This map reflects the sheer power of the earthquake, the magnitude of the destruction it caused, and the desperate efforts of the Japanese government to understand and regain control over a chaotic situation. Explanatory notes next to towns and infrastructure describe the damage and other critical information, sometimes in great detail, but in other cases bluntly as 'completely destroyed' or 'mostly collapsed.' The areas outlined in red circles were damaged (被害區域) while the areas shaded in solid red were burned (燒失區域).

Standalone numbers indicate the number of destroyed households by area, while numbers expressed as a fraction show the ratio of destroyed homes to total homes, and a number in parentheses notes the number of deaths. Red x's indicate areas where roads, railways, and communication lines have been severed, whereas the areas shaded with red vertical lines show where tsunami damage occurred.

Following the earthquake, a false rumor targeting ethnic Koreans spread throughout Japan. As a recently colonized people, Koreans already faced discrimination, and tensions were heightened by the Korean independence movement. The rumors, which stated that Koreans either were responsible for the earthquake or were taking advantage of the disaster, led to a massacre, today known as the Kanto Massacre. Between 6,000 and 10,000 ethnic Koreans died, and the Japanese government imposed martial law. Several prominent socialist and anarchist political figures were also murdered by the Imperial Army and local police in the post-earthquake chaos (the Amakasu and Kameido Incidents).

In light of the damage caused by earthquake, the Japanese government considered moving the capital away from Tokyo and studied several possible sites. Ultimately, they chose to reconstruct Tokyo. Although rebuilt in the following years, both Tokyo and Yokohama would suffer similar levels of ruin in the final months of World War II at the hands of American bombers.

The Great Kanto Earthquake left deep imprints on Japanese culture and history, and in retrospect presaged the turn towards militarist nationalism, racism, and the collapse of democracy in the following two decades. It also is part of a much longer history of natural disasters in Japan, especially earthquakes, tsunamis, and typhoons. Tokyo, Yokohama, and several other cities needed to be almost entirely reconstructed at considerable cost. The earthquake set back the national economy and the government issued emergency 'earthquake bonds' to help businesses survive. When the government proposed to start redeeming these bonds in 1927, it caused a financial panic and many small banks collapsed, causing more economic strain, and leaving the large zaibatsu-affiliated banks as the sole survivors. This financial crisis caused Japan to experience the Great Depression earlier than other industrialized economies and discredited the political, financial, and bureaucratic elite, to the benefit of militarists and other illiberal forces.

This map was produced based on a September 1923 investigation (no exact date given). Given the context, it was likely produced soon after the earthquake on September 1, in early-mid September, for internal government use by the Imperial Japanese Land Survey Bureau (陸地測量部). It is held by the by the National Museum of Japanese History and the Saitama Prefectural Archives. It has no known history on the market.