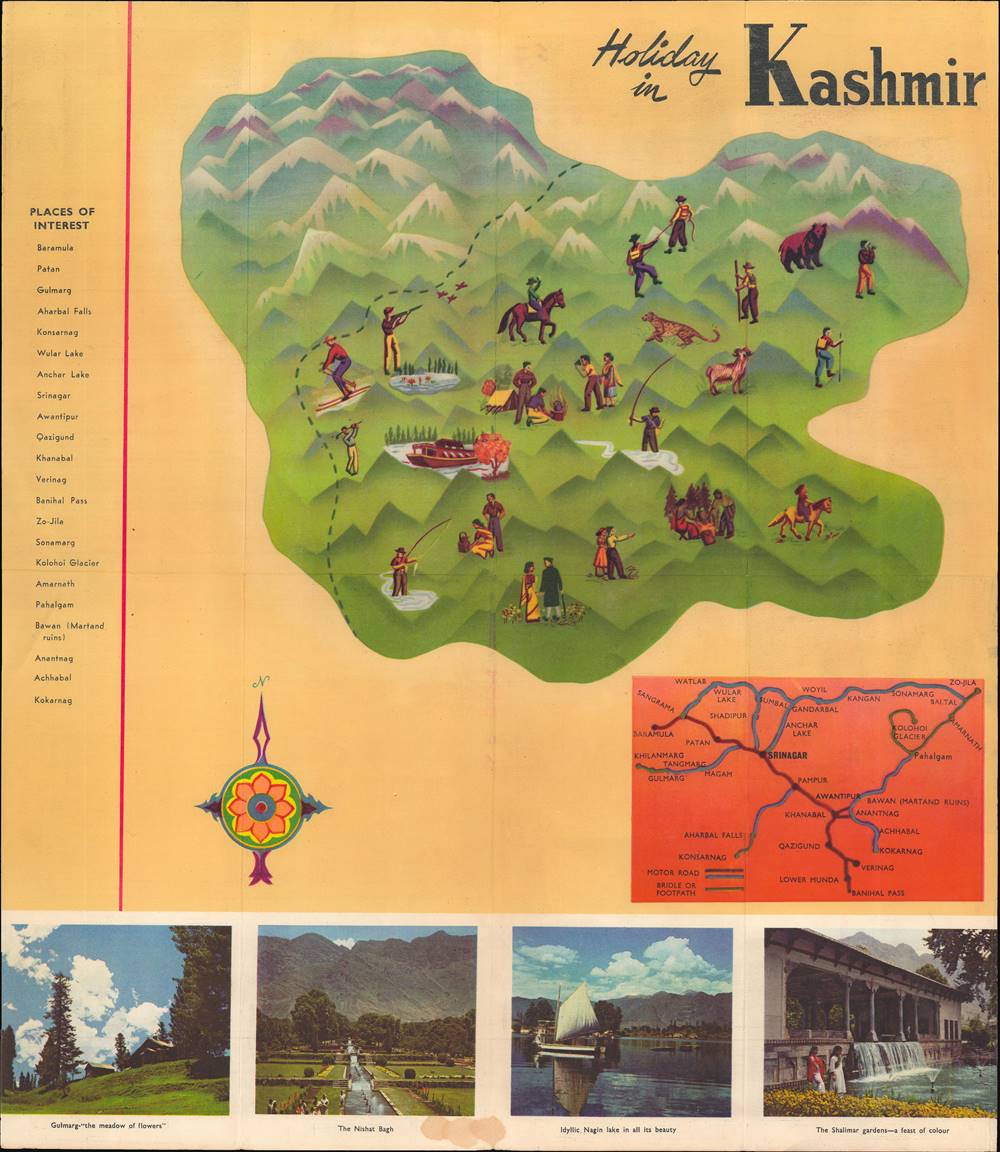 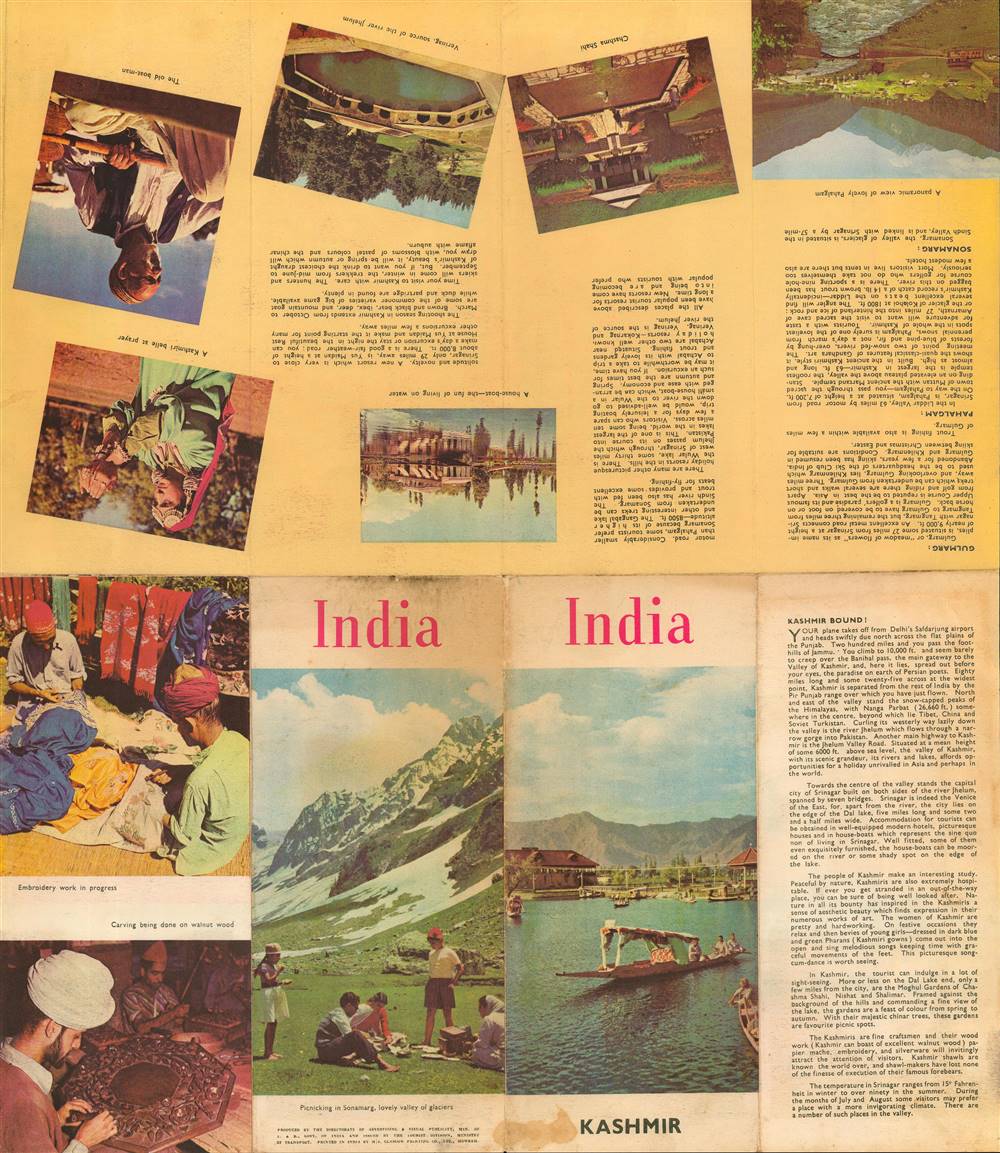 A tourist and propaganda map of Kashmir, soon after its incorporation into India.

This is a beautiful c. 1960 tourist folding map of Kashmir produced by the Indian government. Although primarily meant to entice domestic and foreign tourists to the region, it is laden with political meaning as the region was only recently and tenuously made part of the Indian Republic.

Although this is superficially an advertisement for the bucolic charms of Kashmir, in reality this map is related to an intense, decades-long territorial dispute between India and Pakistan that has been a major factor in four wars, multiple smaller armed clashes, a simmering insurgency, and widespread discontent among the populace. It is designed to both portray Kashmir as pacific, when it was hardly so, and to encourage visitors from India and beyond to come to the region and facilitate its integration into India.

If the point were too subtle, the brochure's cover when folded is an image of a lake, most likely Dal Lake in Srinagar, with the word 'India' in large red text above it and the word 'Kashmir' in smaller black text below, leaving no ambiguity as to the supremacy of India over the region. The fanciful descriptions on the verso are heavily imbued with exoticism, almost comically so, extolling the region's natural wonders, beautiful girls, honest and hardworking people, and the exquisite craftmanship behind local wares. An inset map on the front (recto) shows the major roads connecting the region.

The Kashmir Valley and surrounding areas, including Jammu, have long been seen as a picturesque destination for travelers, especially those seeking to escape the heat of Indian summers. The area was ruled by the Mughals and then the Afghan Durrani Empire until being conquered by the Sikh Empire in the early 19th century. After Gulab Singh was appointed by the Sikhs as Raja of the region, he cleverly maintained neutrality in the First Anglo-Sikh War and later became a reliable ally to the British, who made him the Maharaja of Jammu and Kashmir. Although most of the population of the princely state was Muslim, the elite was primarily Hindu and Sikh, and several laws and taxes were enacted that discriminated against Muslims.

When India and Pakistan partitioned in 1947, the Maharaja of Jammu and Kashmir attempted to stay neutral, and the United Nations aimed to organize a plebiscite in the region as soon as would be safely possible. In the Kashmir Valley, a coalition of secularists and religious minorities (Hindus, Sikhs, etc.) tended towards autonomy and a loose affiliation with India while rural areas outside of the Valley, which were poorer and almost entirely Muslim, sided with Pakistan. When pro-Pakistan insurgencies began in some of these regions, Indian and Pakistani forces were drawn into the fighting, leading to an all-out war between the two sides. In the end, the Indian Army controlled about two-thirds of Jammu and Kashmir and the Maharaja signed an ascension agreement with India, leaving about one-third of the princely state's territory under de facto Pakistani rule.

Afterwards, uprisings continued in pockets until the mid-1950s. During this time, the Indian government aimed for greater integration of the region, resisted efforts at a plebiscite, and arrested leaders of the self-rule movement, including Sheikh Abdullah, the figure with the greatest political legitimacy in Kashmir. Wider geopolitics, including U.S.-Pakistan, China-Pakistan, and India-China relations have been a major factor in the conflict. Despite three more wars (the most recent being in 1999) and frequent insurgency and counter-insurgency actions, the situation has roughly remained the same. In 2019, the Indian Parliament passed the Jammu and Kashmir Reorganisation Act, which stripped away some of the autonomy and legal exceptions of the region (including Ladakh) and likely will lead to its greater integration with the Indian interior. Afterwards, an intense and widespread communications blackout was imposed to prevent unrest, as the Act was very unpopular in the region itself.

This map was produced by the Directorate of Advertising and Visual Publicity of the Ministry of Information and Broadcasting of the Government of India, was issued by the Tourist Division, Ministry of Transportation, and was printed by the Glasgow Printing Co. in Howrah. There is no date listed, but from context it is likely from the late 1950s or early 1960s. The only institution known to hold this map is the State Library of Victoria in Australia. The Ministry of Information and Broadcasting produced several publications (including books, maps, and travel guides) around this time simply titled 'Kashmir' and it is possible that this map is related to one of those publications.

Directorate of Advertising and Visual Publicity (1955 – present) of the Ministry of Information and Broadcasting of the Government of India, has its origins in World War II, when a consortium of private advertisement agencies was established for purposes of wartime propaganda and to counter rumors and disinformation. After the war, the consortium was formalized and after India's partition, it became the publicity and advertising office for the government as a whole. Learn More...


Tourist Division (1954 – 1960) of the Ministry of Transportation (and Communications) of the Government of India was a short-lived government office that was reorganized multiple times over the 1950s and 1960s, until it reached its current form as the Ministry of Tourism in 1967. It produced a number of tourist and travel pamphlets in English and other Western languages during this time. Learn More...