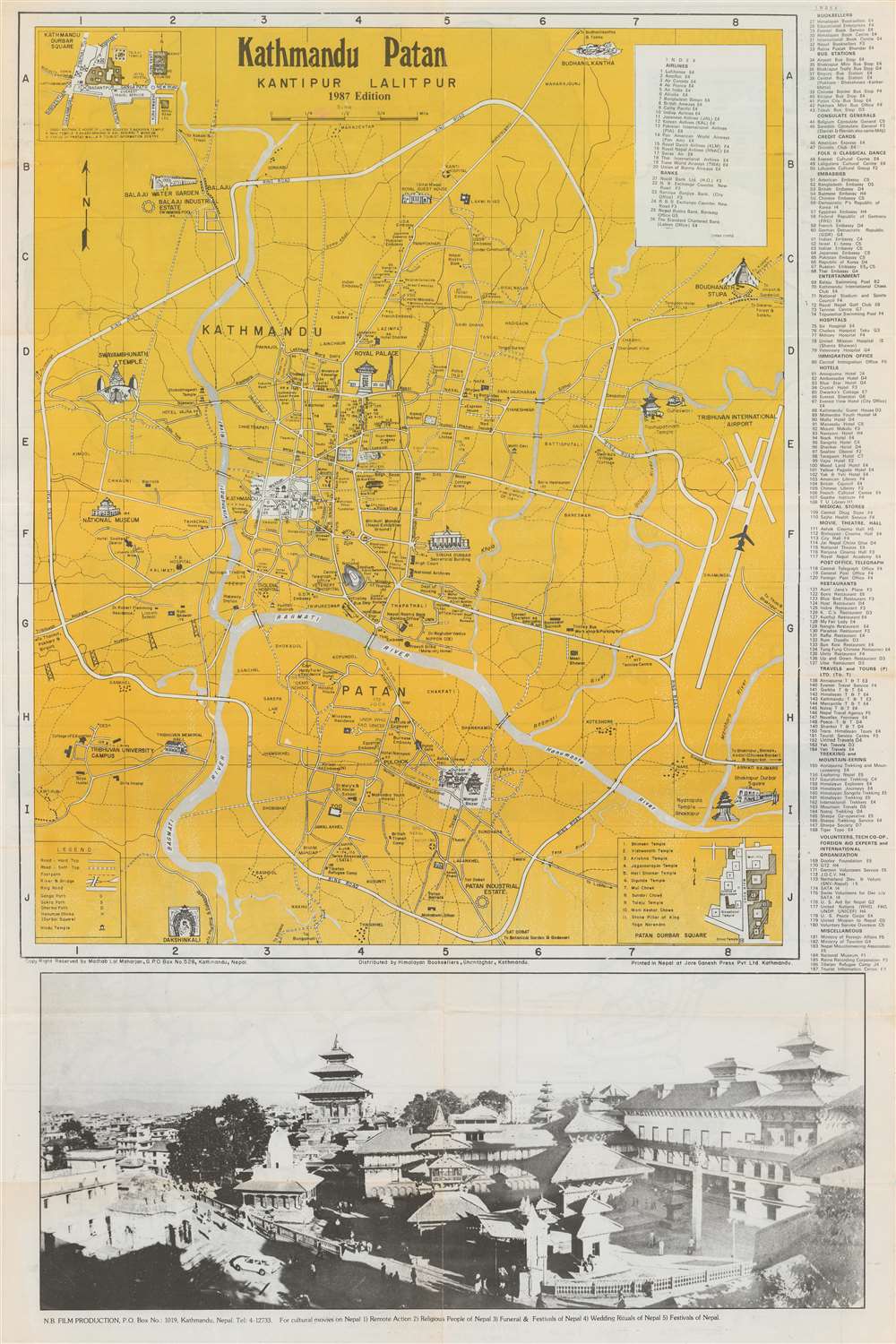 A pictorial map of Kathmandu, Nepal featuring illustrations of some of the city's World Heritage sites.

This is a 1987 Madhab Lal Maharjan pictorial city map or plan of Kathmandu and Patan (Lalitpur), Nepal. The map depicts the cities from the ring road and Tribhuvan University to Tribhuvan International Airport and from Budhanilkantha to Dakshinkali. Major roads in both Kathmandu and Patan are illustrated and labeled with solid lines indicating blacktopped roads and dashed lines symbolizing dirt roads. Several locations in and around the city are illustrated in profile, including the Royal Palace, the Royal Guest House, Pashupatinath Temple, the Singha Durbar Secretarial Building, the National Museum, the Boudhanath Stupa, and the Swayambhunath Temple. 187 other locations are numerically identified and correspond with an index situated along the right border, such as airline offices, banks, booksellers, embassies, hospitals, hotels, restaurants, and movie theaters. Mountaineering businesses are also listed. Maharjan's bookshop, Himalayan Book Sellers, is labeled in block letters not far below the Royal Palace. An inset map of Kathmandu Durbar Square is situated in the upper left corner in which a handful of locations are labeled and another nine are indexed numerically. Another inset map, this one depicting Patan Durbar Square, is included in the lower right corner. Three locations are labeled and another eleven are numerically indexed. A photographic view of Kathmandu is situated below the map.

Madhab Lal Maharjan (1950 - ) is the owner of Mandala Book Point, a book store in Kathmandu, Nepal. Born in Kirtipur Municipality, located nine kilometers east of Kathmandu, Maharjan was introduced to the career of bookseller while he was in college at Tribhuwan University by Professor Ishwori Lal Shrestha. He graduated in 1974 and opened his first book shop, Himalayan Book Seller, in 1976. Maharjan and Mandala Book Point have published the journal Studies in the History and Society of Nepal since 1996 and published Issue 24, Volume 1 in June 2019. He also served as general secretary of the National Book Sellers and Publishers' Association of Nepal.