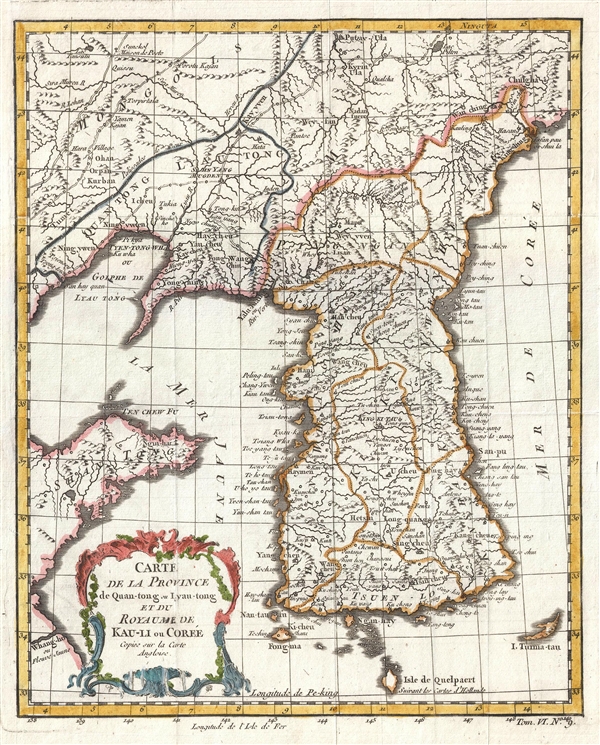 This is an uncommon 1749 map of Korea by Jacques Nicholas Bellin. Centered on the west coast of Korea (Corea), this map covers all of peninsular Korea as well as adjacent parts of Manchuria and China. Korea, as presented here takes on a trapezoidal form with a wide flat base. The map names numerous cities and provinces throughout Korea as well as noting coastal islands and ports. Cartographically Bellin derived this map from an earlier though less specific 1735 map by J. B. B. D'Anville. The detail presented throughout the interior makes it clear that D'Anville drew his map based upon Korean sources - a first for a European cartographer. The map changed little under Bellin.

The sea between Japan and Korea, whose name, either the 'Sea of Korea', 'East Sea', or the 'Sea of Japan,' is here identified in favor of Korea as Mer de Coree. Historically, Korea has used the term 'East Sea' since 59 B.C., and many books published before the Japanese annexation of Korea make references to the 'East Sea' or 'Sea of Korea.' Over time, neighboring and western countries have identified Korea's East Sea using different terms. The St. Petersburg Academy of Sciences referred to the East Sea as 'Koreiskoe Mope' or 'Sea of Korea' in their 1745 map of Asia. Other seventeenth and 18th century Russian maps alternate between 'Sea of Korea' and 'Eastern Ocean'. The 18th century Russian and French explorers Adam Johan von Krusenstern and La Perouse called it the 'Sea of Japan', a term that subsequently became popular worldwide. Nonetheless, the last official map published by the Russians uses 'East Sea' and 'Sea of Korea'. The name is currently still a matter of historical and political dispute between the countries.

This is one of three maps that Bellin drew including Korea - the other two of which cover a much larger area. Bellin prepared this map for Antoine-Francois Prevost's Historie General des voyages.