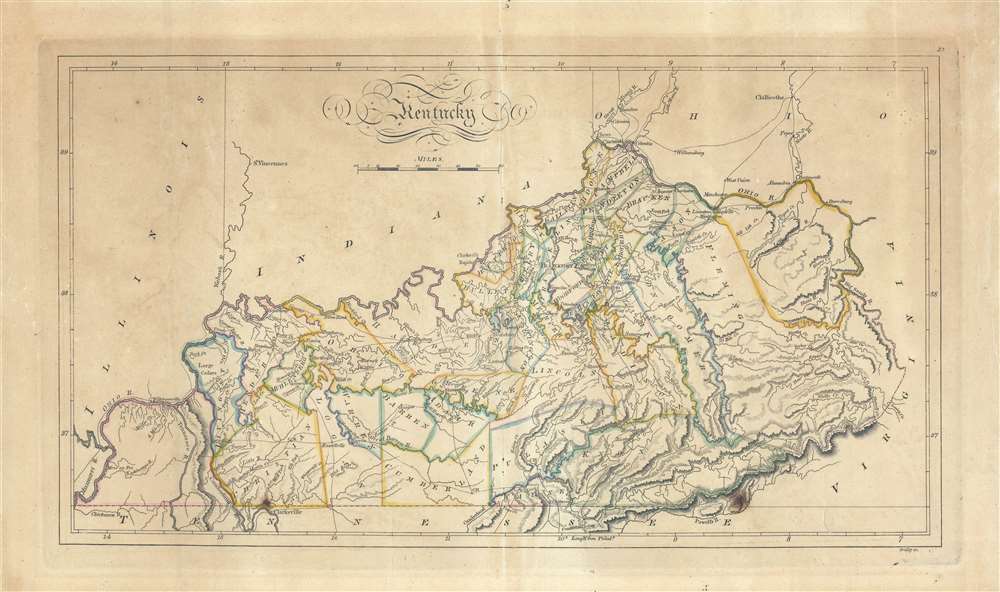 An 1814 map of the state of Kentucky by Matthew Carey and engraved by Enoch Gridley for the 1814 edition of Carey's General Atlas. Produced roughly twenty years after Kentucky gained statehood, it gives a sense of the rapid development of the state.

Counties and regions are distinctly outlined, while rivers, creeks, towns, roads, mountains, and a host of additional geographical features are noted. Along the Ohio River, Cincinnati stands out prominently towards top, while to the southwest Louisville is noted with relatively small text, belying its rapid growth at this time. Lexington, the state's largest town, sits at the convergence of five roads.

As with many parts of the young republic, place names were not entirely settled, and some of those that appear here later changed. For instance, to the south of Louisville, near the birthplace of Abraham Lincoln in Hodgenville (not indicated here), 'Bairdton' became Bardstown, while the settlement of Bealsburg near today's Fort Knox disappeared entirely.

In the years since Carey first published his map of Kentucky (kentucky-carey-1795), the state's population had grown rapidly. Around the start of the American Revolutionary War (1775 - 1783), the area's white population was in the low hundreds, yet large numbers of settlers migrated there during and after the conflict. Between the 1790 and 1810 censuses, Kentucky's population more than quadrupled (though not yet a state, Kentucky was counted separately from Virginia in the 1790 census).

This map was engraved by Enoch G. Gridley and issued as Plate No. 21 in the 1814 edition of Carey's General Atlas; the first atlas made in the United States to use a standardized color model. It is only independently cataloged by the David Rumsey Historical Map Collection and is scarce to the market.


Enoch G. Gridley (fl. c. 1803 - 1818) was a Philadelphia-based engraver of maps and prints, known primarily for his map engravings for the latter editions of Carey's General Atlas. Learn More...

Good. Even toning. Centerfold and occasional creases visible. Repaired tear at bottom-right below the 'V' in Virginia. Two dark spots towards bottom.