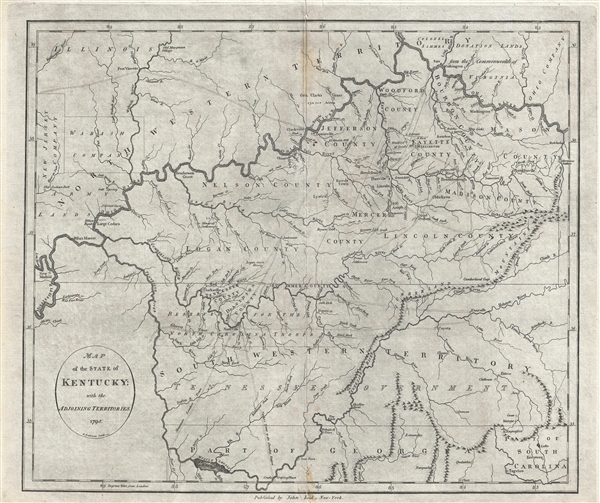 Fascinating map. One of the earliest obtainable maps of Kentucky and Tennessee.

This 1795 map by John Reid is one of the earliest obtainable maps of Kentucky and Tennessee. Centered on the Cumberland River, the map covers from New Madrid on the Mississippi River to, roughly, the Cumberland Gap, and from the confluence of the Ohio and Great Miami River to northern Georgia. The towns of Lexington, Louisville, Nashville, Knoxville, etc. are noted. Identifies Leestown, which was the first Anglo-American settlement on the north side of the Kentucky River and is now part of Frankfort. Pioneer roads, called traces, are also identified throughout. The land grants of the New Jersey Companies, Wabash Company, the General Clark's Grant, the Ohio Company and Colonel Simmens in the surrounding territories are noted. The cartographer appears to have had only a tenuous grasp on the topography of the region and, other than a narrow presentation of the Cumberland Mountains, the land appears flat and well watered by an elaborate network of rivers.

The map offers much of interest from a preliminary overview of the Tennessee Governments, to interesting annotations like 'Reserved for the North Carolina Troops,' 'Colonel Simmes Donation Lands,' ' the Wabash and new Jersey Companies, and much more. We can only being to scratch the surface here.

The New Jersey and Wabash Companies were private joint stock ventures predating the American Revolutionary War that were formed to purchase and settle American Indian lands. Despite collecting considerable investment and purchasing vast tracts of territory both companies were based upon an illegal premise. Before the Revolution, the Royal Proclamation of 1763 forbade private purchase of Native American lands, so Great Britain refused to recognize these transactions. Following the outbreak of the American Revolutionary War, officials of the merged Illinois-Wabash Company appealed to both Virginia (which claimed the Illinois Country) and to the United States to recognize their land purchases, but were unsuccessful. After the United States bought the land in question from Native Americans and resold it, the matter eventually went to the Supreme Court of the United States. In Johnson v. M'Intosh (1823), the Court ruled that the U.S. government, following earlier British precedent, would not recognize private purchases of native lands, and that New Jersey and Wabash Company's purchases were therefore invalid.

This map's treatment of Tennessee, labeled here as both the South Western Territory (referring to North Carolina's Claims) and the Tennessee Government, is exceptionally interesting. The entirety of Tennessee was originally included in North Carolina's coast to coast charter which – for practical political purposes was generally assumed to terminate at the Mississippi River. Tennessee's easternmost counties were thus originally the western most counties of North Carolina. In the years following the American Revolutionary War the government of North Carolina was too depleted to defend its westernmost settlements against American Indian attacks or support their right to navigate the Mississippi River. Tennesseans realized they would have to look to themselves for military support. In 1784 Tennessee's eastern counties rallied and attempted to form the new state of Franklin with John Sevier as governor. Meanwhile, in western Tennessee, the Cumberland Settlements ratified the Cumberland Compact and even brokered a treaty with Spain. Despite bold aims, both the Cumberland Compact and attempts to promote the state of Franklin lacked federal support and were suppressed by North Carolina. This changed in 1789 when North Carolina ratified the constitution and joined the Union. In doing so it gave up the rights to its western land paving the way for Tennessee to peruse statehood in 1795-6.

A number of early towns and settlements are noted, many with names evocative of the frontier aspect of this region at the end of the 18th century. Howards Settlement appears on the Muddy Rier. On the Ohio Henderson's Grant is noted. Lystra, founded by London speculators on paper but not in fact, appears in Nelson County. The speculators imaged a grand town arranged in a grid structure much like Savannah Georgia, but it never reach fruition. Another spurious utopic vision of English speculators, Ohiopiomingo, appears just to the north on the Ohio River. Still another utopic settlement, Franklinville, named after Benjamin Franklin, is situated on the north fork of the Kentucky River.

Unlike many of the American maps in Reid's atlas, this map first appeared in the English publication Winterbotham's Historical, Geographical, Commercial and Philosophical View of the United States where it was engraved by John Russell. The map present here, bears the John Reid imprint and was issued in Reid's American Atlas.


John Russell (c. 1750 - 1829) was a British cartographer active in London during the late 18th and early 19th centuries. Russell apprenticed as a goldsmith under William Palmer before turning to engraving and printing. He drew maps and engraved for several major publishers of his period including Alexander Dalrymple, Benjamin Henry, Robert Sayer, John Moore, and William Guthrie. Russell's 10 apprentices included such prominent cartographers as Alexander Findlay and Samuel Clapp. Russell was based on Constitution Row Grays Inn Lane, Middlesex (London). Learn More...