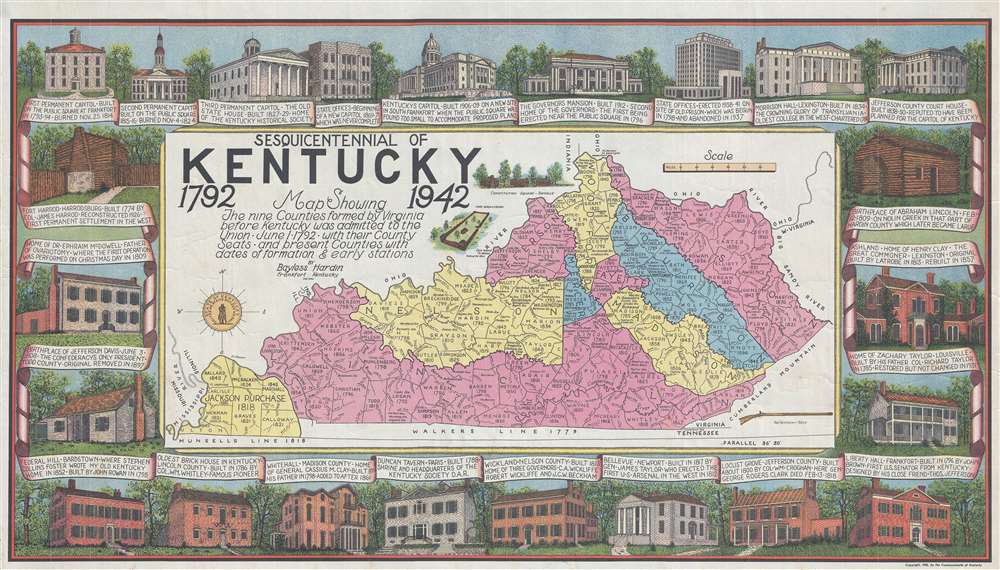 Illustrates the original nine counties established before Kentucky's admission into the Union.
$450.00

This is a 1942 Bayless Hardin map of Kentucky to celebrate the state's sesquicentennial, or the 150th anniversary of Kentucky's admission into the Union. The map depicts the state from Missouri to Virginia and West Virginia and from the Ohio River to Tennessee. An unconventional illustration of the state, the nine differently colored counties are those established by Virginia before Kentucky was admitted to the Union. Each of these nine counties is labeled, and the present counties are all illustrated and labeled as well, along with their date of formation. Numerous cities and towns are labeled throughout, including Frankfort, Louisville, and Lexington. Several rivers, streams, and creeks are labeled, as well as forts from the state's frontier days. Two vignettes are included just above the map of Kentucky, one illustrating Fort Boonesboro and the other Constitution Square in Danville. Below the map, an illustration of the 'Kentucky' rifle is included as well.

An elaborate border featuring profile illustrations of historically important buildings from across the state encircles the map situated in the center. The different iterations of the capitol building are illustrated along the top, with the first two being destroyed by fire and the third now the home of the Kentucky Historical Society, where Bayless Hardin spent all of his professional life. The state capitol building now in use occupies the top center. The birthplace of President Abraham Lincoln is illustrated on the right, along with the homes of Senator Henry Clay and President Zachary Taylor. The birthplace of Jefferson Davis, a U.S. Senator and the President of the Confederate States and Fort Harrod, the first permanent settlement in the west, are illustrated along the left border.

This map was produced by Bayless Hardin in February 1942 and printed by the Commonwealth of Kentucky.