1823 Tanner Map of Kentucky and Tennessee 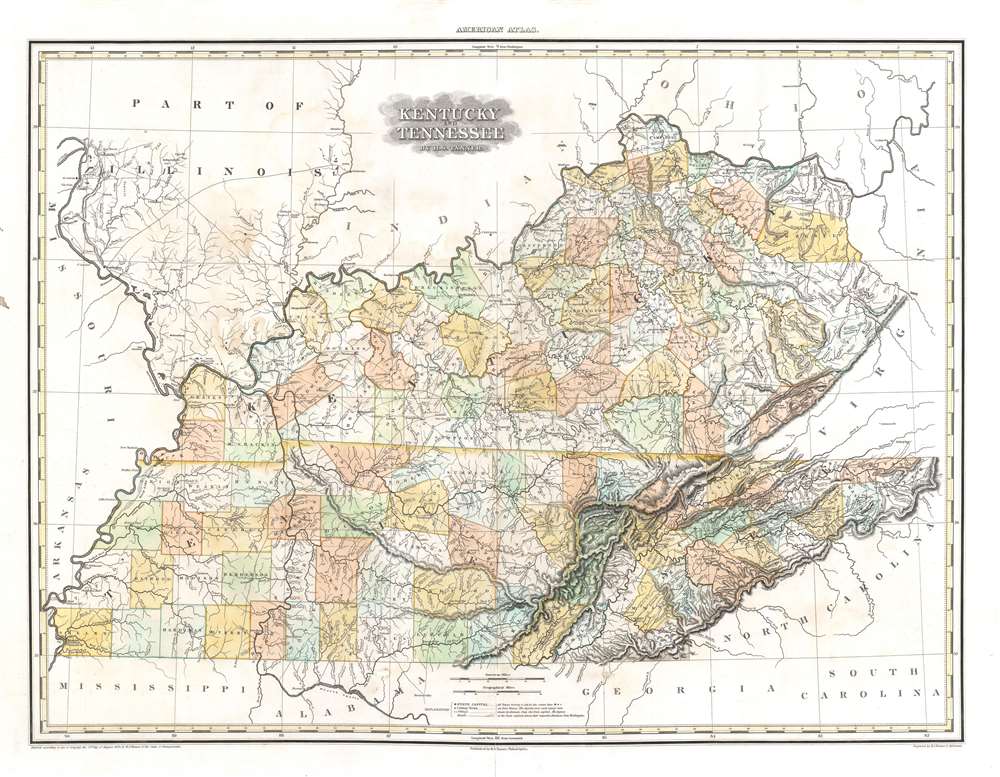 1823 Tanner Map of Kentucky and Tennessee

This is a rare, transitional state of an important map of Kentucky and Tennessee by Henry S. Tanner. This elephant folio map covers both Kentucky and Tennessee in full, with parts of neighboring states sketched in. The map is a strong example of Tanner's superb engraving, showing rivers, topography by hachure, cities, towns and roadways. Various natural features and resources are marked as well: in Clay County KY, for example, a 'Burning Spring' is noted - this being a stream around which natural gas escapes from the ground which may be set alight. Salt works, iron mines, colleges, and 'oil springs' all find their way into this detailed map.

Throughout the map, Kentucky and Tennessee's counties are named and are made more distinguishable from one another with original wash color. It is in the westernmost counties of Tennessee that we see the greatest change in the map: in the first state, many of these are marked but left unnamed. Here, (in addition to the removal of the reference to Illinois from the title) the counties of Hardeman (Hardiman on the map,) McNairy (McVarry on the map,) Haywood, Tipton, Dyer, Gibson, Obion, and Weakley (here spelled 'Weakly') are newly - one might say hastily - named. All of the land in Tennessee west of the Tennessee River had been legally-recognized Chickasaw territory prior to The Chickasaw Cession of October 19, 1818; only a few of these counties had been established prior to the 1823 publication of Tanner's New American Atlas, with several named as counties late that year and into 1824. This example was included in an 1823 edition of the Atlas, indicating that Tanner updated the work piecemeal prior to the publication of 1825/6 edition. That latter edition includes this map, unchanged beyond the notation in the title 'improved to 1825.'

The Aftermath of the New Madrid Earthquakes

The newly-named 'Obion County' is shown with a 'Reelfoot R.' which, though having been identified in a 1785 survey, had ceased to exist eleven years prior to the engraving of this map. In 1811 and 1812, the whole region was wracked by the New Madrid Earthquakes. As a result, this area subsided, and produced an enormous lake and swamp area. On the map, this is shown as Wood Lake and Wood Lake Swamp: Today it is known as Reelfoot Lake. Eliza Bryan, an eyewitness to the earthquakes, wrote in 1816 of the appearance of this astonishing new lake:

Lately it has been discovered that a lake was formed on the opposite side of the Mississippi River, in the Indian country, upwards of one hundred miles in length, and from one to six miles in width, of the depth of from ten to fifty feet. It has communication with the river at both ends, and it is conjectured that it will not be many years before the principal part, if not the whole of the Mississippi, will pass that way.

The depiction of Wood Lake and its attendant swamp on the map agrees largely with Bryan's report, starting nearly opposite New Madrid across the Mississippi and running south until meeting and presumably emptying into the Obion River.

The original title of this map was Kentucky, Tennessee and part of Illinois. It is unclear why Tanner chose to supply the degree of Illinois detail to this map that he did: after all, his 1823 atlas included a map specifically of Illinois and Missouri. We might speculate that this map was completed prior to the execution of the dedicated Illinois map, which might also explain the need to update this one with the recent changes in the western part of the state. But this portion of this map offers much more detail than Tanner typically offers to non-focus states.

The map was engraved by Tanner (and his assistants) for inclusion in the 1823 edition of his New American Atlas; we see about twenty examples of the originally-titled 1823 edition of this separate map in OCLC. The 1825 edition, marked 'improved to 1825' we see in about 17 institutional collections. While we are compelled to make allowances for errors in cataloguing, the present example appears to be much scarcer than either the 1823 or the 1825, with four or perhaps five examples showing this title without the 1825 note. Perhaps twenty five examples of the 1823 New American Atlas are catalogued in OCLC.