1825 Tanner Map of Kentucky and Tennessee 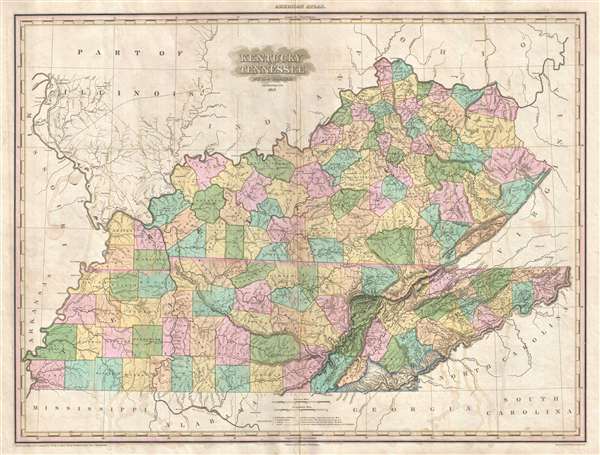 1825 Tanner Map of Kentucky and Tennessee

An exceptionally beautiful early map of Kentucky and Tennessee.
$3,500.00

A rare and important map of Kentucky and Tennessee by H. S. Tanner. This elephant folio map covers both states in full as well as, in less detail, parts of adjacent states. The map shows rivers, topography by hachure, cities, towns and roadways. Tanner first published this map in 1823, but in that edition it also included parts of Illinois. In this second edition Illinois has been dropped from the title and the map has been augmented by the addition of new counties (particularly in southwestern Tennessee) and the additions of various cities and roads. It is noteworthy that the Illinois portion of this map offers much more detail than Tanner typically offers to non-focus states. The present example is the scarce 2nd edition from 1825. This map was published in the 1825 edition of Tanner's iconic New American Atlas. This map, like all maps from the New American Atlas, is today rarely seen on the market.