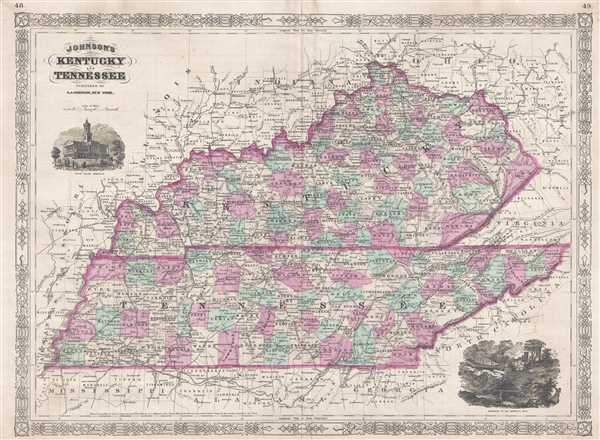 Incredible map of these two states just after the Civil War.

This is an 1866 A. J. Johnson map of Kentucky and Tennessee. Represents Johnson's third iteration of this map, which he updated in 1865 to reflect changes to these secessionist states following the American Civil War. The map depicts both states in full and the region from Missouri and Louisiana to West Virginia, Virginia, and North Carolina and from Illinois, Indiana, and Ohio to Mississippi, Alabama, and Georgia. Numerous cities and towns are labeled, including Memphis, Nashville, Bowling Green, Louisville, Frankfort, and Lexington. Myriad rivers, roads, railways, and some topographical features are illustrated throughout. Counties are shaded different colors to allow for easy differentiation. Inset views of the Nashville State House and the Entrance to Mammoth Cave decorate the map in the upper left and lower right corners, respectively. The whole is surrounded by the fretwork style border common to Johnson's atlas work from 1863 to 1869.

Published by A. J. Johnson as page numbers 48-49 in the 1866 edition of Johnson's New Illustrated Family Atlas.