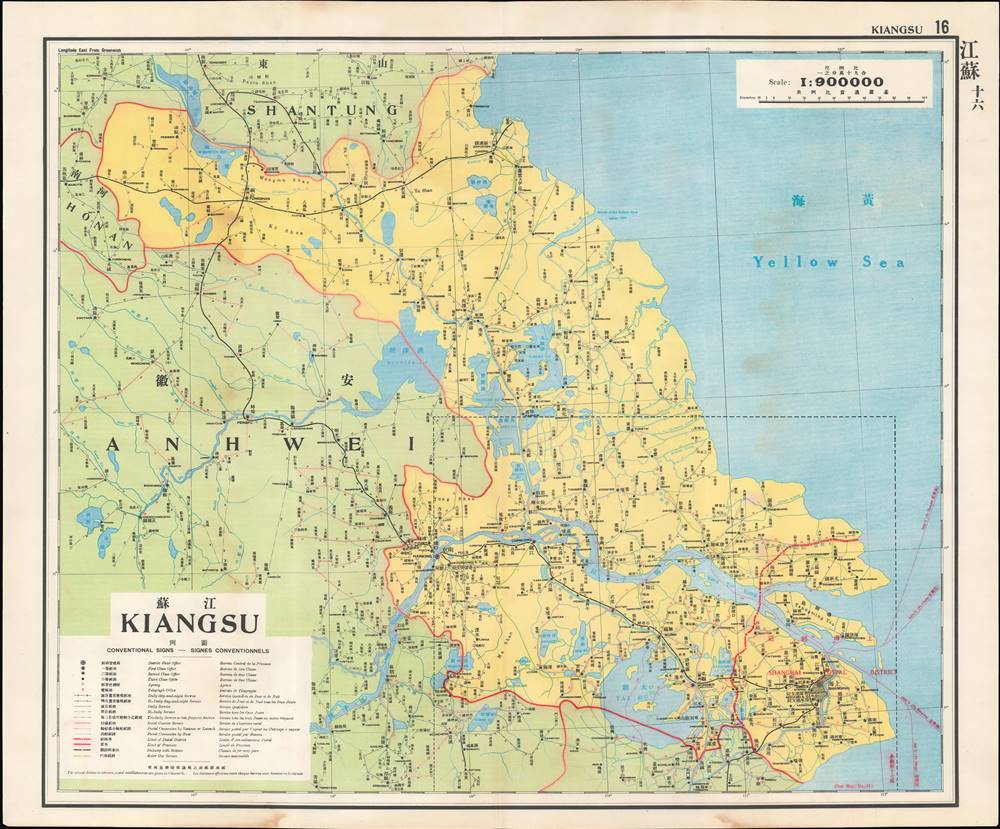 Postal infrastructure as a reflection of China's modernization.
$400.00

This is a map of Jiangsu (Kiangsu) Province from the 1933 edition of The Postal Atlas of China (中華郵政輿圖), compiled by Charles Jacot-Guillarmod. It highlights the evolving postal infrastructure of the region, reflecting a broader modernization drive by the Nanjing government.

The importance of waterways for Jiangsu are evident here, particularly the Yangtze River at bottom. For most of the imperial era, these waterways were the primary means of long-distance transportation and formed a sort of highway system in ancient China, most impressively the Grand Canal (運河, here as Yün Ho), stretching over 1,000 miles between Beijing and Hangzhou. By the early 20th century, upkeep of the Grand Canal and other waterways had slackened due to natural disasters, warfare, and viable alternatives, especially as maritime travel became faster and less expensive, and railways became more widespread.

Jiangsu could be considered a microcosm of China in the Republican era (1912 – 1949), containing within it the modern metropolis of Shanghai, impressive ancient cities like Suzhou and Nanjing, and a vast, impoverished countryside, especially north of the Yangzi River. People from this region, known as Subei (蘇北, 'northern Jiangsu') or Jiangbei (江北, 'north of the Yangzi River') people, sought refuge in Shanghai and other cities from natural disasters, warfare, banditry, and starvation in the countryside, forming an urban underclass of servants, laborers, rickshaw drivers, and prostitutes.

Nevertheless, Jiangsu benefitted from the modernization efforts of the Nanjing government in this period (described below) and further investment in the People's Republic era, especially in the past 30 years. Even excluding Shanghai, which is now a separate provincial-level administration, Jiangsu is one of the wealthiest regions of China today.

After purging the Communists, Chiang established a new national regime in Nanjing. In the decade that followed, despite weak authority, multiple civil wars, a Communist insurgency, and an incremental Japanese invasion of northern China, the Nanjing Government and the Kuomintang were able build something like a modern, functioning bureaucratic state, particularly in the Lower Yangtze Delta around Nanjing and Shanghai, and successfully complete a string of hallmark infrastructure and modernization projects. Nevertheless, full-scale war with Japan in 1937 derailed these efforts, leading ultimately to Chiang's retreat to Taiwan and the Communist takeover of mainland China in 1949.