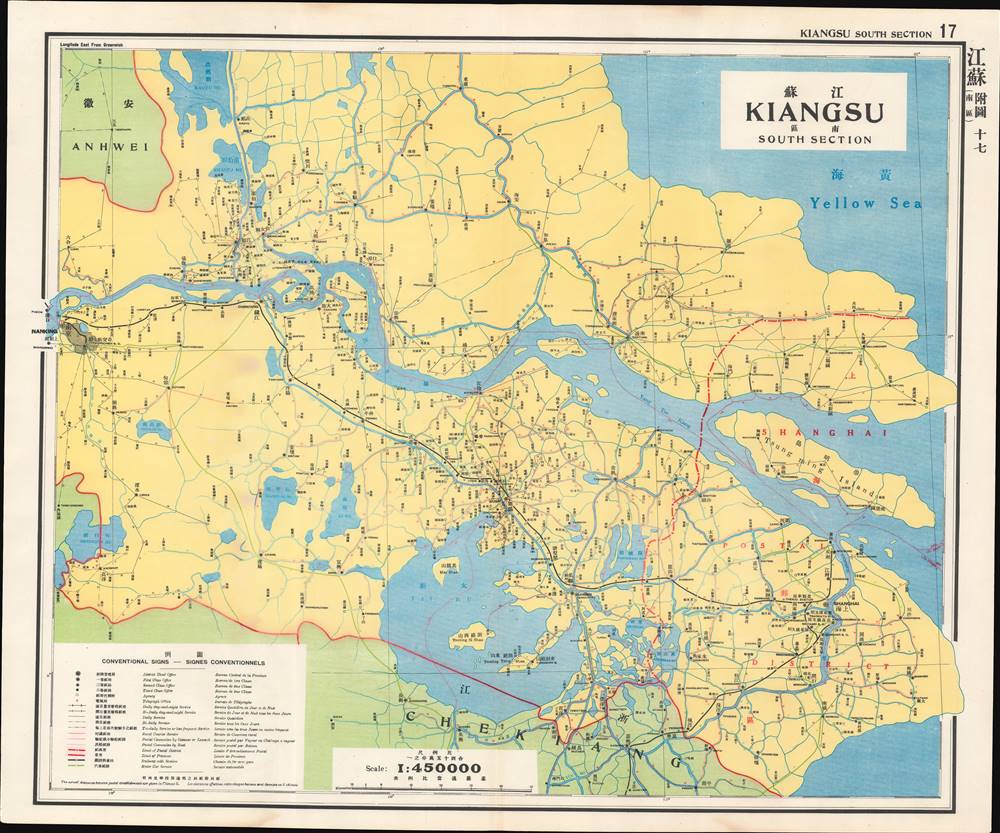 Postal infrastructure in the most developed region of China.
$400.00

This is a map of southern Jiangsu (Kiangsu) Province from the 1933 edition of The Postal Atlas of China (中華郵政輿圖), compiled by Charles Jacot-Guillarmod. It illustrates the evolving postal infrastructure of the region, reflecting a broader modernization drive by the Nanjing government.

This map is an appendix to the map of Jiangsu, the seventeenth in the atlas series, focusing on the southern portion of the province. Southern Jiangsu was deserving of its own map because the region included not only the capital city, Nanjing (Nanking), but also the cosmopolitan metropolis of Shanghai and several other economically and culturally important cities, such as Wuxi (无锡, here Wusih), Zhenjiang (镇江, here Chinkiang), Yangzhou (here Kiangtu 江都), and Suzhou (蘇州 or Wuxian 吳縣, here Soochow or Wuhsien). The markings on the map indicated in the legend give a great deal of information about the postal and transportation infrastructure in China at this time by presenting the frequency of service along various routes. The numbers along the routes represent Chinese li (里), equivalent to roughly 500 meters.

The area depicted on this map, the heart of the Jiangnan region (江南), is bisected by numerous waterways, the most prominent being the Yangzi (or Yangtze) River, the Huangpu, a tributary of the Yangzi snaking through Shanghai, and Lake Tai (Tai Hu), one of the largest lakes in China. Although these waterways had formed a sort of highway system in ancient China, leading all the way to Beijing via the Grand Canal, they had fallen into disrepair and disuse in the 19th century.

The people who lived along these rivers and canals were often subject to devastating floods in the late 19th and early 20th century, leading many to seek refuge and a new life in nearby cities, especially Shanghai. Impoverished migrants from north of the Yangzi formed an urban underclass in Shanghai and other nearby cities, filling the ranks of rickshaw drivers, prostitutes, street hawkers, and stevedores. The yawning gap in wealth and development between southern (蘇南) and northern Jiangsu (蘇北) is obvious in the paucity of postal routes, roads, and railways north of the Yangzi.

After the purging of Communists, Chiang established a new national regime in Nanjing. In the decade that followed, despite weak authority, civil war, a Communist insurgency, and an incremental Japanese invasion of northern China, the Nanjing Government and the Guomindang were able to build something like a modern, functioning bureaucratic state, particularly in the Lower Yangzi Delta around Nanjing and Shanghai, and successfully complete a range of hallmark infrastructure and modernization projects. Nevertheless, full-scale war with Japan in 1937 derailed these efforts, leading ultimately to Chiang's retreat to Taiwan and the Communist takeover of mainland China.

Compiled by Charles Jacot-Guillarmod, this atlas contains maps covering all of China in considerable detail. Most were derived from regional working postal maps. The legends on the maps are written in English, Chinese, and French. The history of the The Postal Atlas of China is closely related to attempts to Romanize placenames in the Chinese Postal System. The first atlas followed the 1906 Shanghai Imperial Postal Joint-Session Conference to develop a system of Romanization following Herbert Giles' 'Nanking Syllabary.' The Giles 'Nanking syllabary' was popular with the French-dominated Chinese Postal Service, which considered the earlier Beijing-based system developed by Thomas Francis Wade as too Anglophone. As was the case for other bureaucratic offices at this time, foreign advisors were often brought in as consultants or even government officials.