1805 Zannoni Map of the Kingdom of Naples, Southern Italy 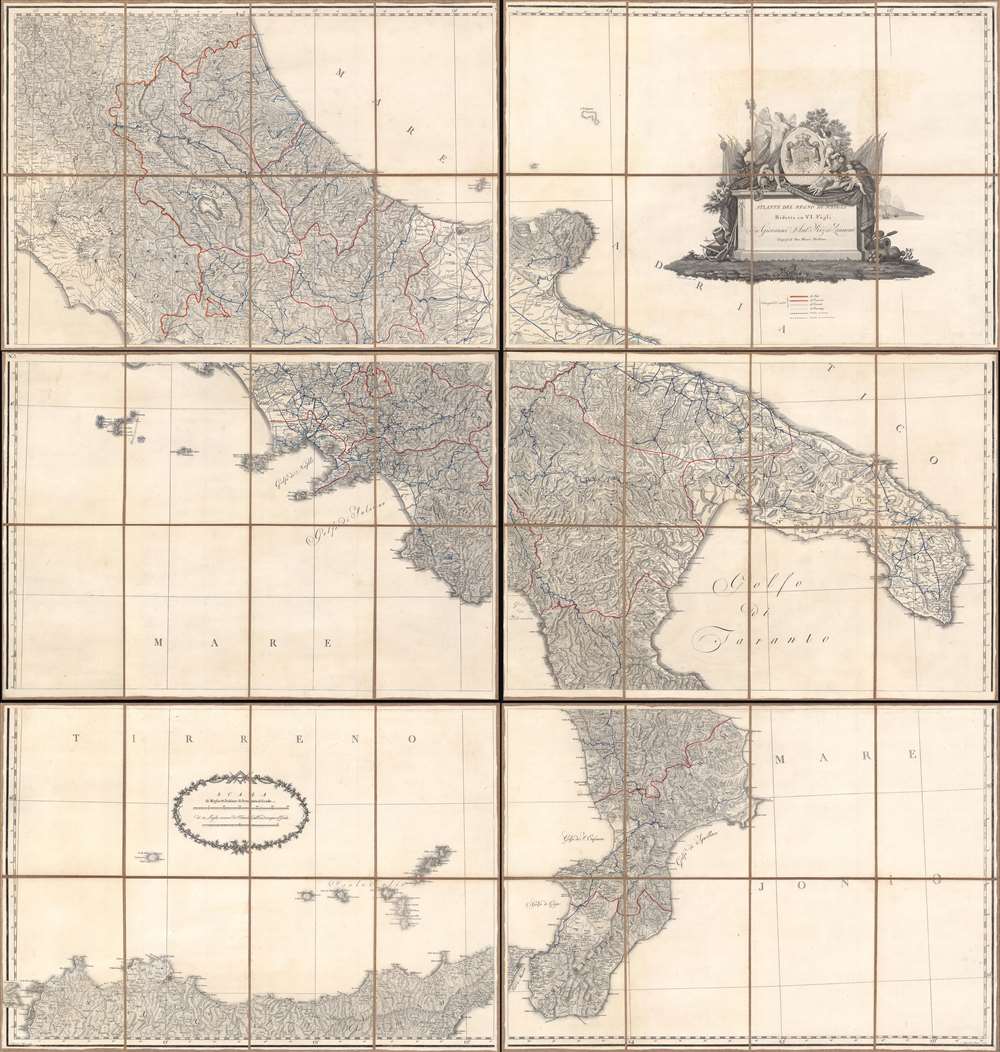 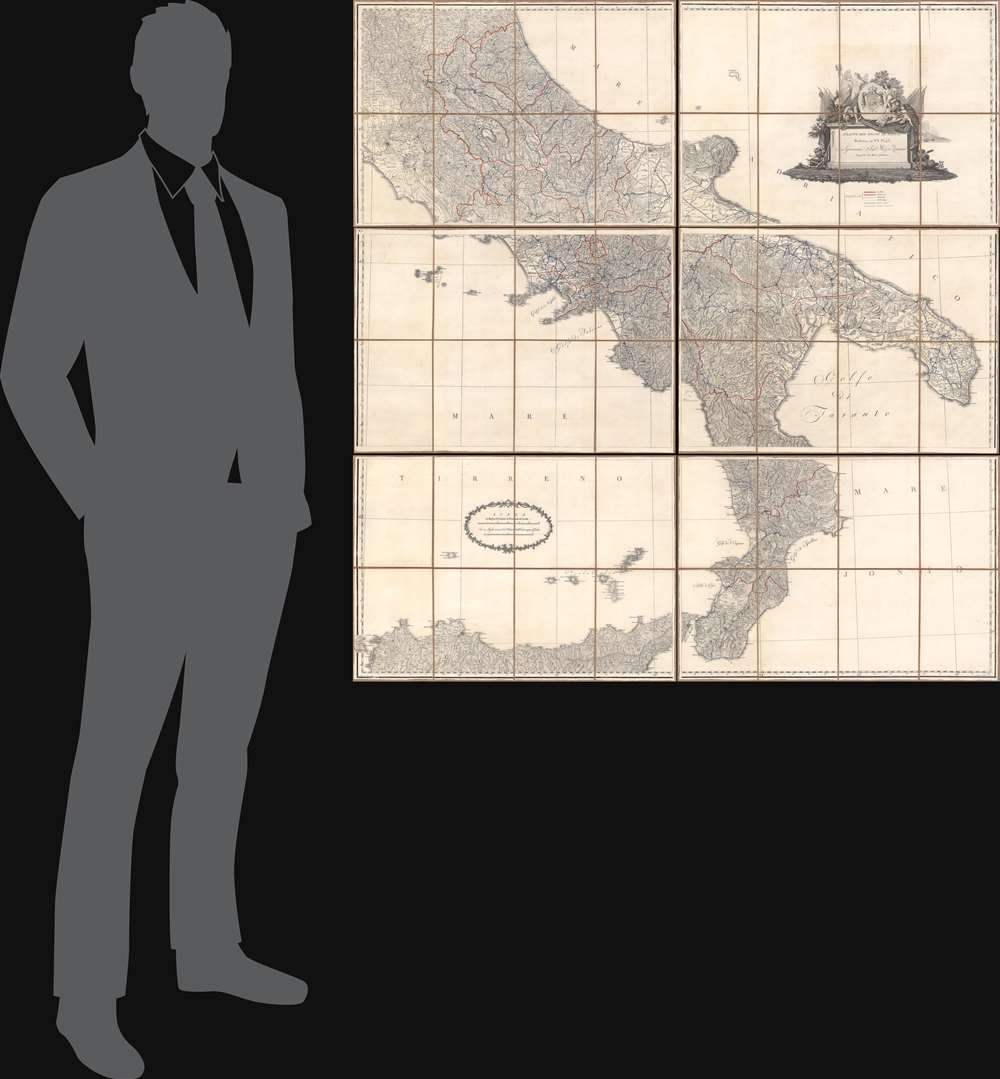 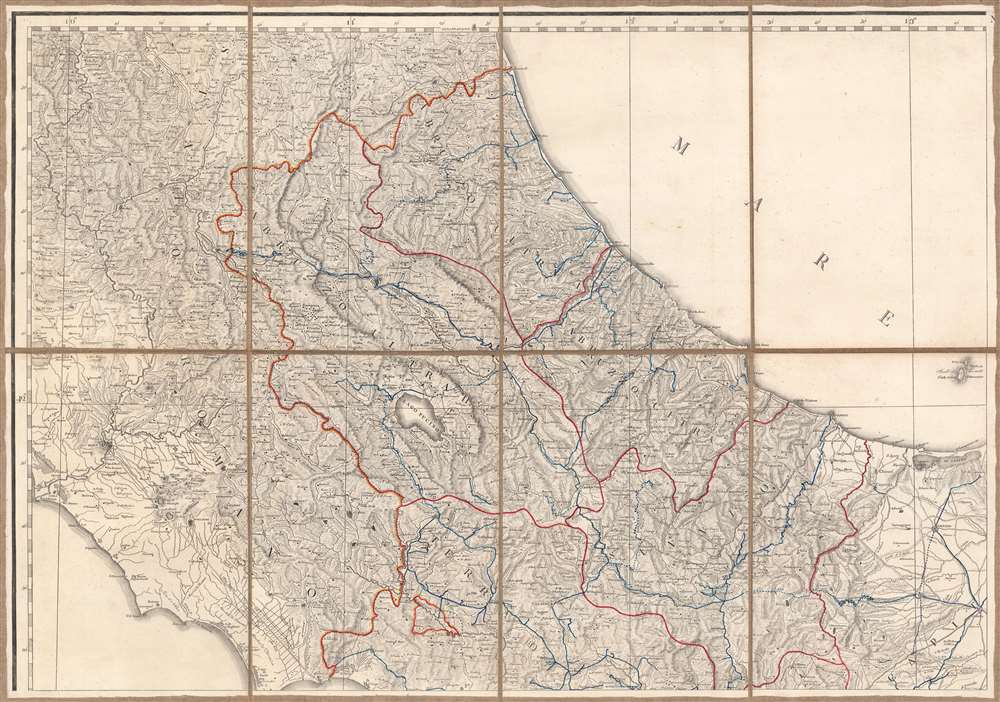 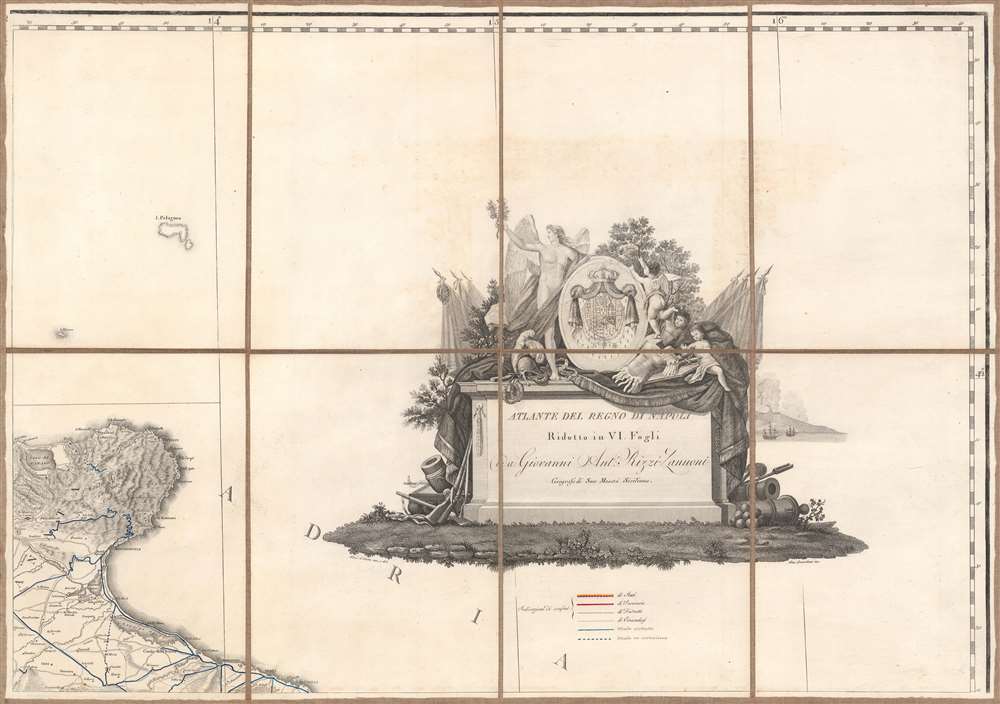 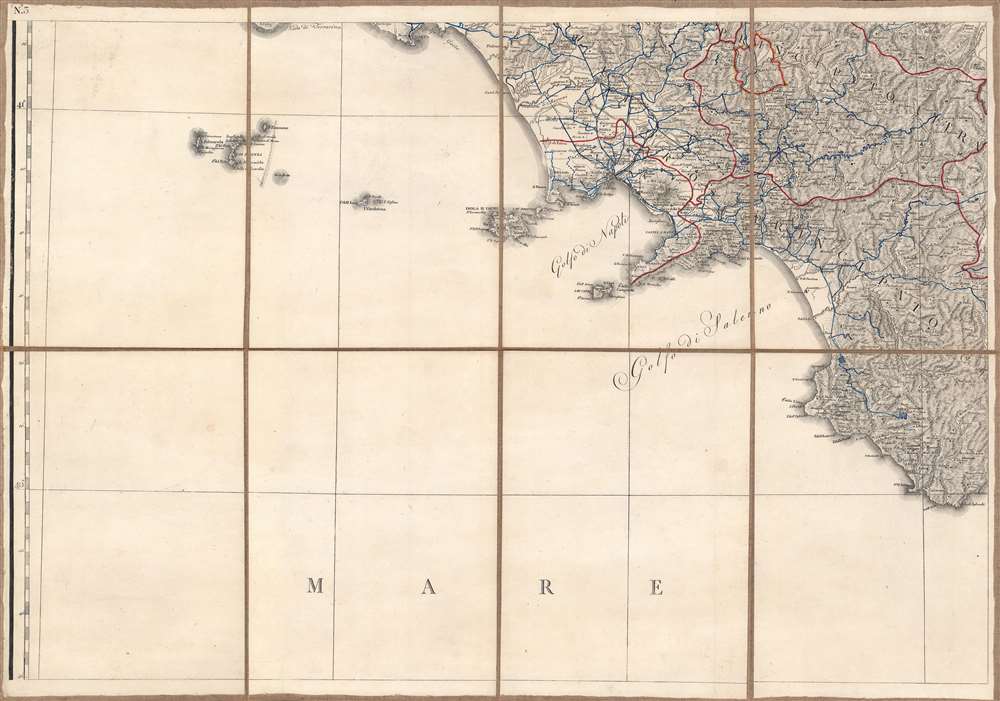 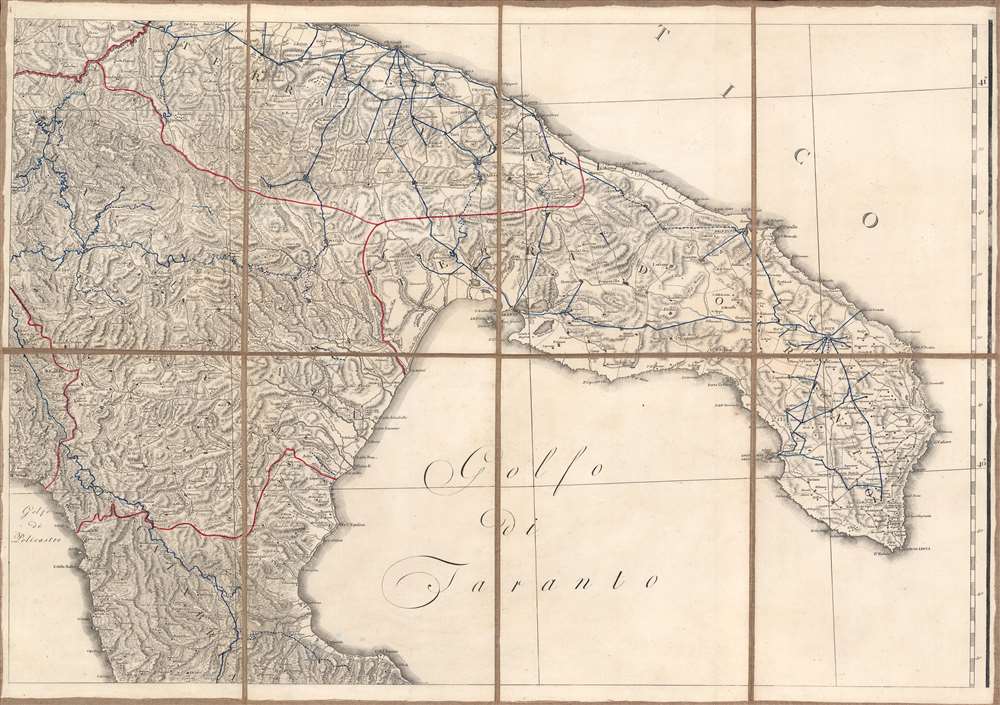 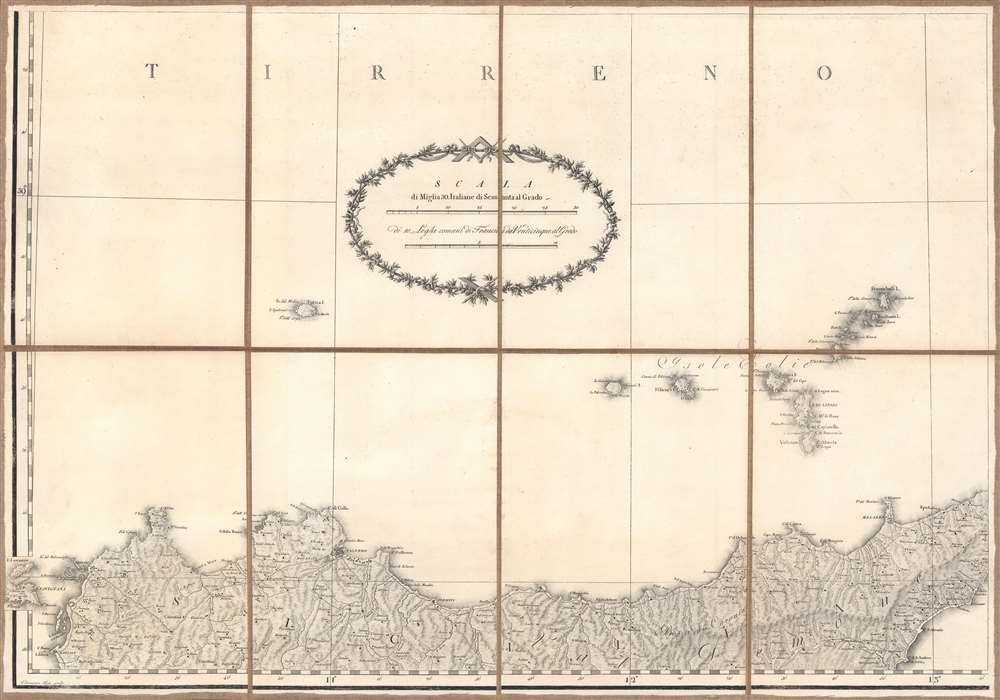 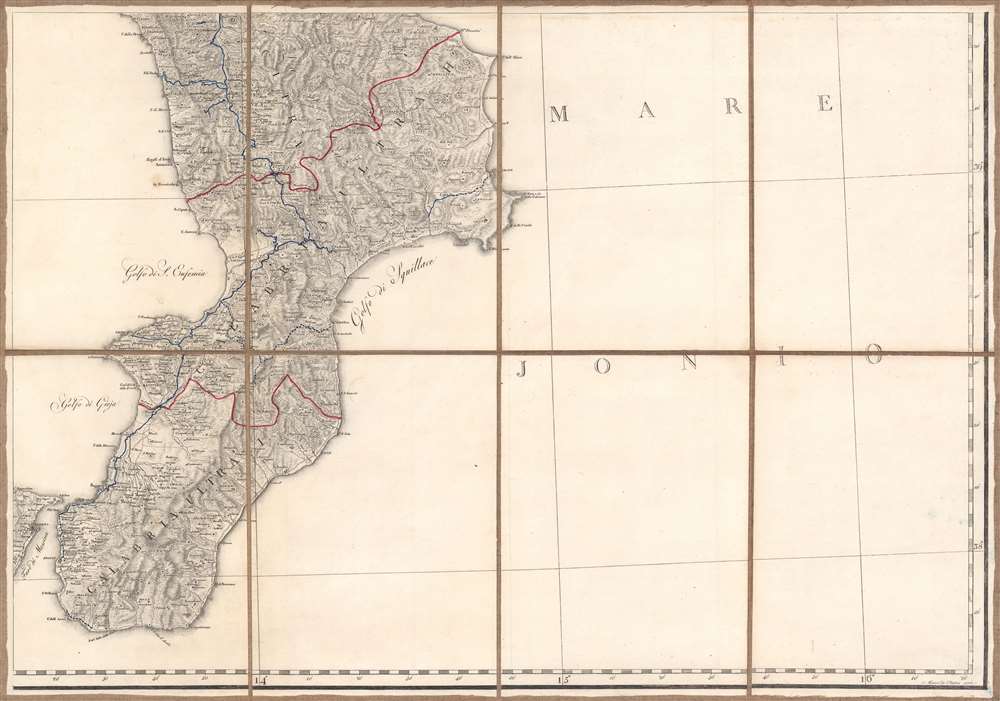 1805 Zannoni Map of the Kingdom of Naples, Southern Italy

The best large-format pre-Napoleonic map of the Kingdom of Naples.
$2,500.00

This is a large and striking c. 1805 folding map of the Kingdom of Naples - the largest and most impressive map of that region yet published. It was made by Giovanni Antonio Rizzi Zannoni, one of the greatest Italian cartographers of his time, and published during an era of rapid political transitions in southern Italy, a result of the French Revolution and the Napoleonic Wars.

The map depicts the Kingdom of Naples, which included roughly the southern half of the Italian Peninsula. The northernmost provinces of the kingdom (Abruzzo Ultra I and II) lie to the east of Rome, shown at top-left, at that time part of the Papal States.

The legend indicates symbols for the borders between states, provinces, districts, and circumscriptions (circondari). Roads (both completed and under construction), appear as well, a considerable feat given the rugged, mountainous terrain of the interior of the peninsula. One can also see the geography of wealth and poverty in southern Italy - the southernmost regions of Calabria and Basilicata are served by only a single modern road, while Naples itself, other cities (Bari, Lecce), and even rural areas further north have proper road networks.

One significant change to the landscape since this map was made is worth noting. The Lago Fucino in Abruzzo, once the third largest lake in Italy, was drained in 1878. Since Roman times, when the settlement of Marruvium (San Benedetto dei Marsi) was founded on its eastern shore, the lake had posed risks of floods and disease as the waters had no natural outflow. Thus, after years of planning and construction, a canal was built and the lake drained, leaving extremely fertile farmland behind (since the 1960s, the dried lakebed also hosts a large satellite telecommunications center).

Ebbs and Flows of Power

This piece captures a period of shifting political power in Europe due to the French Revolution and the Napoleonic Wars. In the early 18th century, the Kingdom of Sicily was transferred from Spain to the Holy Roman Empire during the War of the Spanish Succession, and then transferred again to the House of Bourbon. Among other reasons, this led the kingdom to oppose the French Revolution against the Bourbon King Louis XVI (and briefly occupy Rome in 1798 to oust a French-installed republican government). The French revolutionary forces briefly expelled the monarchy and established a republic in Naples in early 1799, but their revolutionary ideals did not take hold in deeply Catholic southern Italy and a treaty was signed restoring a much-weakened monarchy.

The Kingdom of Naples sided against Napoleon as part of the Third Coalition, which Napoleon soundly defeated at the Battle of Austerlitz in December 1805. Soon afterwards, French troops invaded the Kingdom of Naples and installed Napoleon's older brother Joseph Bonaparte as the King of Naples in 1806. Two years later, Joseph was promoted to the King of Spain and Napoleon's younger sister Caroline and her husband, Joachim Murat, were installed as monarchs of the kingdom. Ferdinand IV, the deposed Bourbon king, retreated to Sicily and continued to resist diplomatic and military pressure from Napoleon's forces.

After Napoleon's defeat, Ferdinand was restored to the throne and merged it with Sicily, forming the Kingdom of the Two Sicilies. As with much of Europe, the restored monarchy struggled in the following decades to suppress nationalist and republican sentiments, and was finally overthrown in 1860 by a small volunteer army led by Giuseppe Garibaldi, one of the key events in the Italian Risorgimento.

As there are multiple editions of this map in multiple formats, it is difficult to firmly establish its distribution and date. This example must date to before the end of the Napoleonic Wars, when the Kingdom of Naples was merged into the Kingdom of the Two Sicilies in 1816. It also appears to date to before 1806, when Joseph Bonaparte was installed as the King of Naples, since editions of the map dating to between 1806 and 1808 are dedicated to him. This phrase used here, Zannoni's 'Maestà Siciliana,' refers to Ferdinand IV of Naples, who also ruled distinctly as Ferdinand III of Sicily until the kingdoms were merged in 1816. However, other editions of the map are explicitly dedicated to 'Ferdinand, King of the Two Sicilies' and it is possible that the indirect reference to Ferdinand was due to rapidly changing political conditions or was a cheeky way for Zannoni to express his displeasure with said changes. This example is also remarkable in that it is was dissected and mounted on linen. This is an especially rare edition of this map, with only four cataloged holdings in the OCLC.