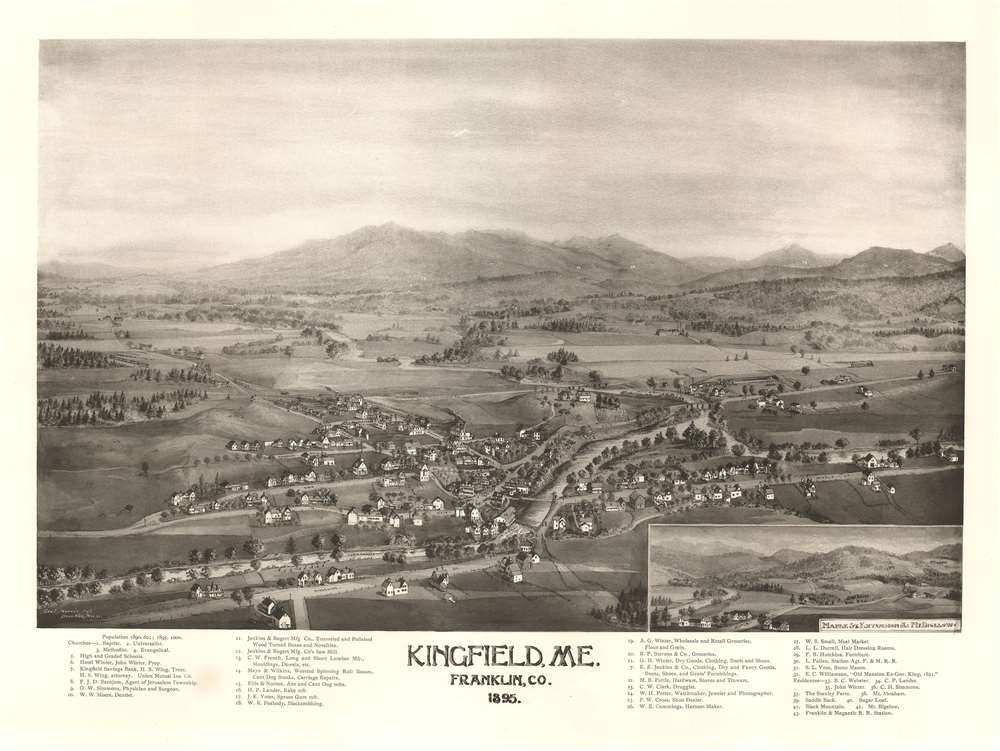 A superb 1895 George E. Norris aquatint bird's-eye view of Kingfield, Maine. The view looks west on Kingfield from a hypothetical highpoint to the east of town, across the Carrabassett River. The primary streets of the town on both sides of the river are noted, as are private residences, service facilities, shops, hotels, and government offices. Behind the town some of Maine's most famous mountains are visible, including Sugarloaf Mountain (now a ski resort), Mt. Abraham, Mt. Redington, and Crocker Mountain. An inset in the lower right looks north from Maple Street to Bigelow Mountain.

This view was issued in 1895 by George E. Norris of Brockton, Massachusetts. Exceedingly rare. We have identified examples at the Library of Congress, the Kingfield Historical Society, Pennsylvania State University, and the University of Maine at Orono, Folger Library.

George E. Norris (1855 – 1926) was an American hotelier, publisher, and bird's-eye view artist based in Brockton, Massachusetts during the latter part of the 19th century. Norris began publishing views in partnership with Albert F. Poole, an established view maker who, at the time, was renting a house in Brockton from Norris' mother. His first views, most of which were signed by Poole, were published in 1883. In 1884 Norris partnered with Henry Wellge, publishing out of Brockton as Norris and Wellge, and later out of Milwaukee as Norris, Wellge and Co. Noris began drawing views independently around 1887. Most of these were printed by Lucien Burleigh of Troy New York. In total, Norris produced about 135 individual city views. In 1897 he left the view business to open a hotel, the Hotel Norris, in Brockton. Meeting some success in this field, in acquired the Hotel Grayson, also in Brockton, in 1912. He ran this until his death of cerebral hemorrhage in 1926.