1849 Meyer Map of Holland or the Netherlands 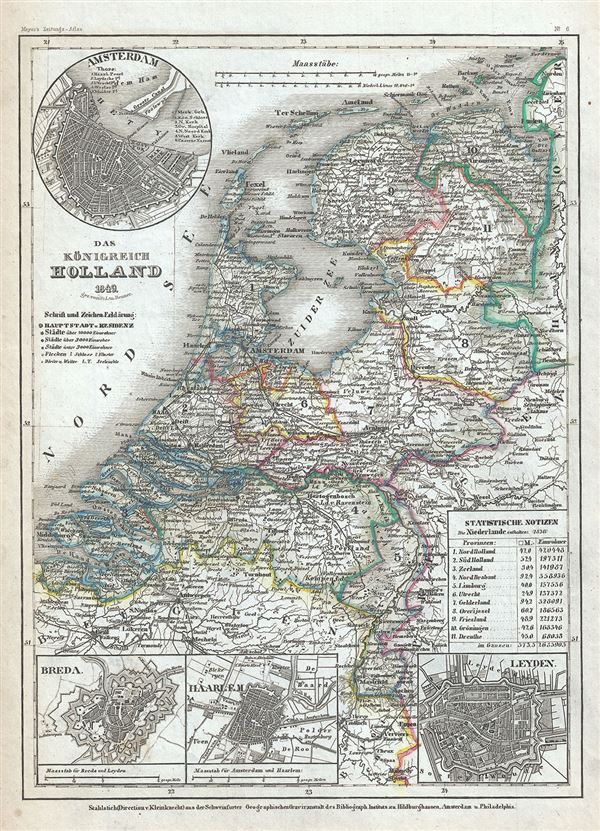 1849 Meyer Map of Holland or the Netherlands

This is a lovely 1849 map of Holland or the Netherlands by Joseph Meyer. It covers the Kingdom of Netherlands, commonly referred to as Holland, from the North Sea to Belgium and the Grand Duchy of the Lower Rhine. The top left quadrant of the map features an inset of the city of Amsterdam. Three more insets featuring the cities of Breda, Haarlem and Leyden are included along the bottom margin. The map also features a table of statistics. Throughout the map identifies roads, rivers, towns, cities, mountains and other important topographical features.

This map was issued as plate no. 6 in Meyer's Zeitung Atlas. Although all the maps in this atlas are not individually dated, the title page and maps were often updated while the imprint with the date was not, causing confusion to the exact date for some of the maps. Moreover some maps in the atlas were taped in at a later date as an update to the atlas. We have dated the maps in this collection to the best of our ability.