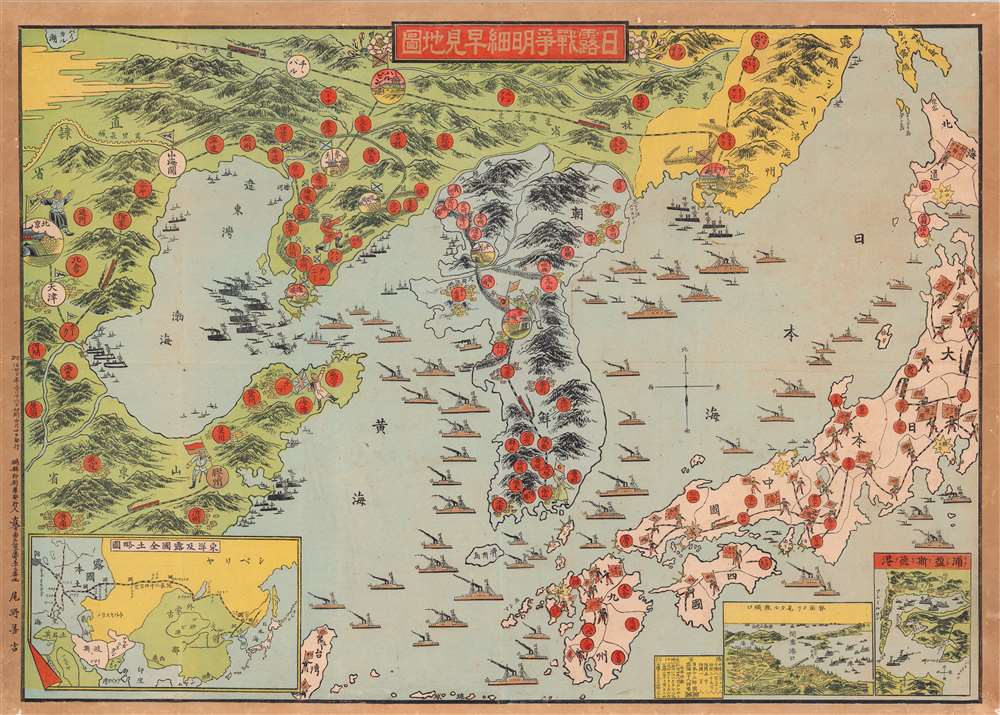 This is a rare 1904 map of Korea and vicinity by Komakichi Maeda (前田駒吉). Centered on Korea, the map details Japanese and Russian positions as of September 15, 1904, during the Russo-Japanese War (1904 - 1905). The table at the top-left shows the distance between cities (Port Arthur, Mukden, Liaoyang, etc.) and towns on or near the frontlines. Many of these names would have been familiar to the Japanese public, which was inundated with information about the war and would therefore have been able to use this map as a visual aid to daily news updates. The table also gives the distance by sea route from Nagasaki to various cities and strategic points in Korea and China. The distances are marked by the Japanese unit of measurement ri (里), which is much longer (about 2.44 miles) than the traditional Chinese li , which uses the same character.

Although the map does not have a legend, aside from the positions of Japanese and Russian troops and ships as well as the names of cities and villages where they were stationed, it shows the location of roads (red lines) and railways (black and white lines). Notably, it shows the route of the all-important China Eastern Railway, namely the southern section connecting Harbin (哈爾濱) to Mukden (or Fengtian 奉天), Dalian (金州) and Port Arthur (旅順口Lüshunkou), one of the main causes and objectives of the war. When this map was produced, Japanese troops had recently taken Liaoyang and the entire Liaodong Peninsula, except for the heavily fortified Russian outpost at Port Arthur at the extreme bottom-left, and were moving towards Mukden, near center. A series of inconclusive battles and the harsh winter slowed Japanese progress, but a full-scale attack on Mukden was launched in late February, resulting in perhaps the largest battle in history to that point, which ended with a quick Japanese victory and occupation of southern Manchuria.

This map was drawn Maeda by Komakichi (前田駒吉) and published by Kinkado Bookstore (金華堂書店). Kinkado was based in Nagano since the early Meiji period. The map was printed on September 15, 1904, distributed on September 20, and reprinted in a second edition (再版) on September 30, probably to reflect changes in the battlefront situation.

Maeda Komakichi (前田駒吉; c. 1900 - 1949) was a Japanese cartographer based in Nagano who mostly produced maps of his hometown, generally published by Kinkado (金華堂書店). Learn More...