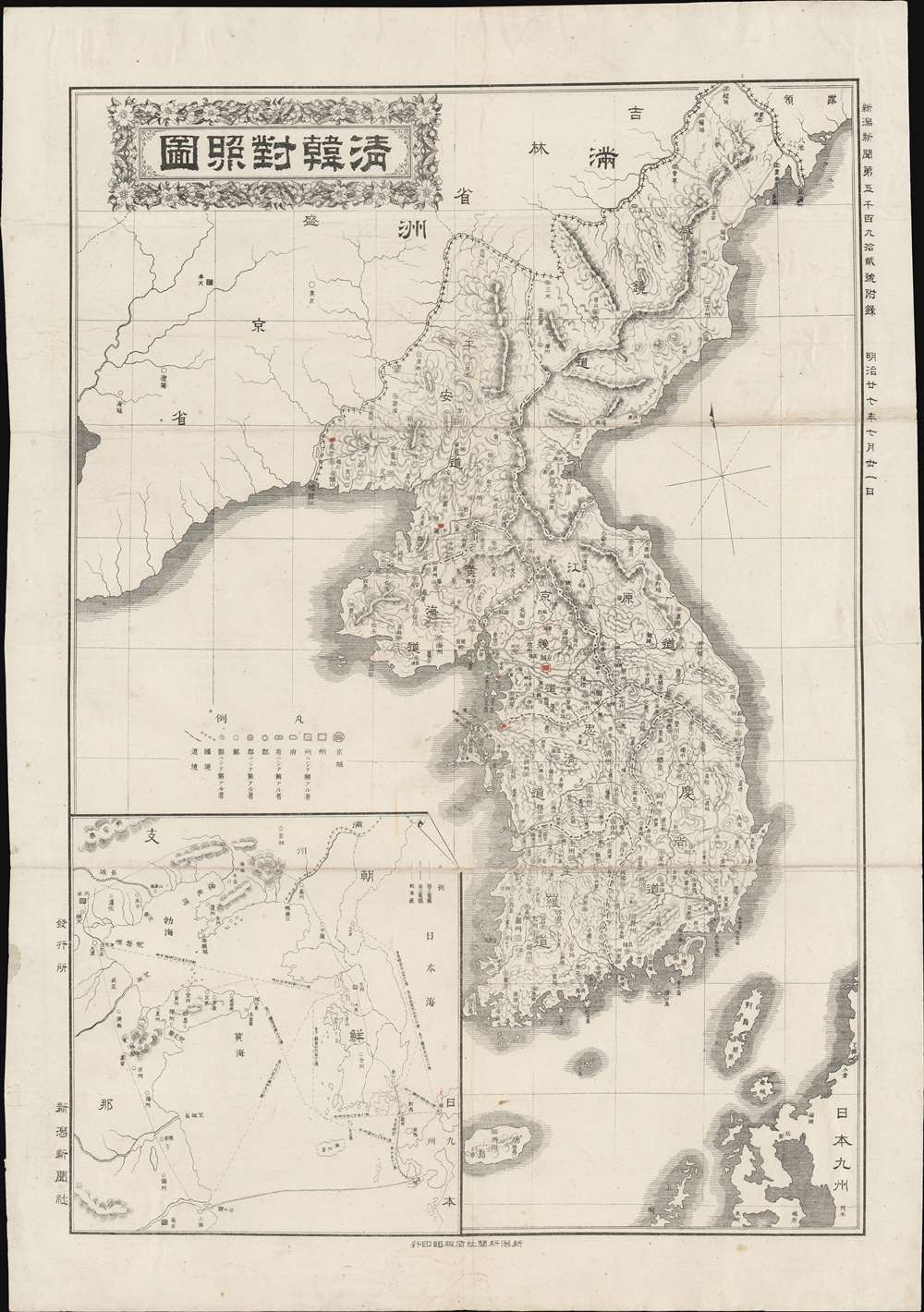 Issued just days after the outbreak of the Qing-Japan War or First Sino-Japanese War.
$1,200.00

A rare 1894 map of Korea drawn to illustrate the beginning of the First Sino-Japanese War (1894 - 1895). The war broke out on July 25th, and this map went to the presses on July 31st, just 6 days later. The map covers all of modern-day South Korea and North Korea, as well as parts of adjacent Manchuria. Korea is here divided into provinces with major cities, and the roadways connecting them, noted. Topography is rendered with hachure. In the lower left a large inset detail telegraph cables and shipping lanes between China and Korea. Ostensibly the map is intended to offer a comparative view of China and Korea, but in fact, merely illustrates connections between the two nations - which would of course be of great intersect at the outbreak of a war that would largely be fought in Korea and China.

The First Sino-Japanese War (July 25, 1894 - April 17, 1895), also called the Qing-Japan War (청일전쟁) was an armed conflict between Qing China and Imperial Japan over control of Joseon Korea. For the previous 200 years, Qing China considered Joseon Korea a tributary state, under its projection. As the Japanese were increasingly bellicose and active in Korea, the Qing began move troops into the region - setting the state for war in the Korean Peninsula. Although the world initially assumed that China would crush much smaller Japan, Qing failure to modernize its military, and the fact that they were at the same time fighting multiple wars and a rebellion, allowed the Japanese to run roughshod over Qing forces. After six months of defeat, the Qing sued for peace. The war ended with the signing of the Treaty of Shimonoseki on April 17, 1895. Under the treaty, China recognized the total independence of Korea and ceded the Liaodong Peninsula, Taiwan and Penghu Islands to Japan 'in perpetuity'. The Japanese victory concretey shifted the center of power in East Asia from China to Japan - an event that set the stage for numerous subsequent conflicts cleared up to World War II.

This scarce map was printed in Niigata on July 31, 1894 for the daily newspaper, Niigata Shinbun. All examples are extremely scarce. We are aware of one other example in private hands, but no institutional holdings.

Niigata Shinbun (1892 - 1912) was a Japanese newspaper based in Niigata. The newspaper was owned by Suzuki Chōzō briefly run by the important Japanese statesman, Yukio Ozaki (尾崎 行雄; December 24, 1859 - October 6, 1954), when he was just 20. At the time the provincial Niigata Shimbun was one of the most prominent Japanese newspaper of the Meiji period. It went into decline in the early 20th century and, by 1912, was out of business. Learn More...