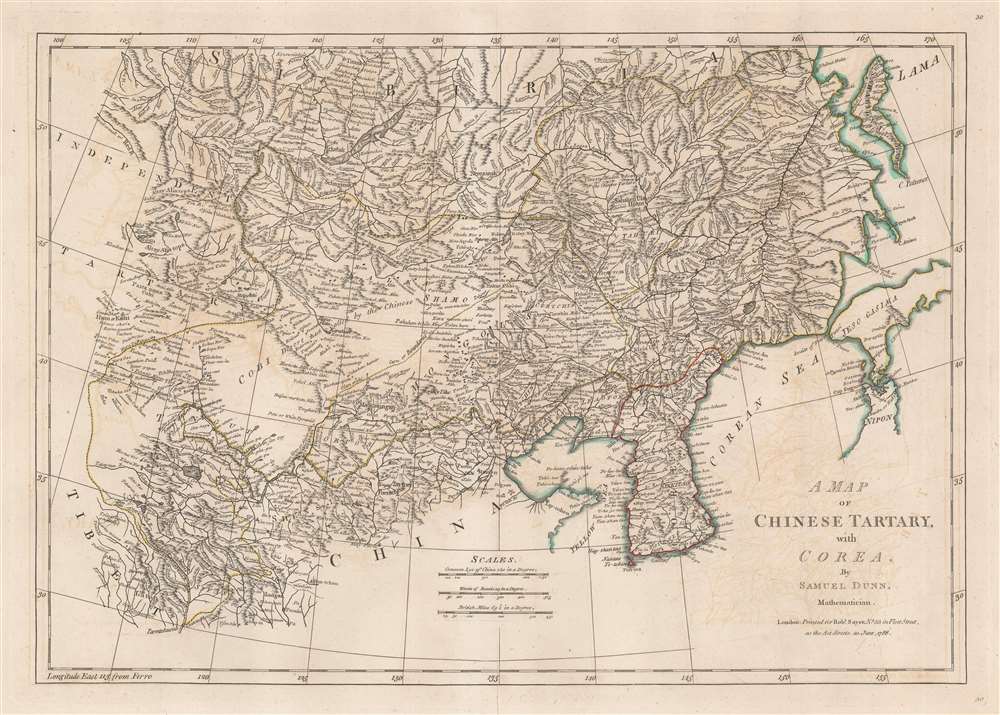 This is an uncommon 1786 Samuel Dunn map of Korea, Manchuria, Hokkaido, Mongolia, and Chinese Tartary. Coverage extends from Tibet and Independent Tartary to Sakhalin, Hokkaido, and Japan. It extends south roughly as far as China's eastern Shandong Province. Korea exhibits a distinctly square base, and, as with much of this map, is consistent with the innovative cartography of J. B. B. D'Anville, one of the preeminent mapmakers of the period. The sea between Japan and Korea, alternately called the Sea of Korea or the Sea of Japan, depending on the mapmaker, is here settled in favor of Korea. The great wall is noted.

The map is intensely detailed, shockingly so in areas only poorly understood by western cartographers. While not fully accurate, there is much of interest. Our eyes are drawn to the several caravan tracks across the Gobi, where individual oases are named. The map is largely drawn from Jean Baptiste Bourguignon d'Anville (1697 - 1782), a significant French cartographer who proved exceptionally talented at piecing together disparate sources into a more accurate whole. In this case, d'Anville based the map on a variety of sources, among them Russian maps, missionary reports, and data collected by Jean-François Gerbillon (1654 - 1717) and Joachim Bouvet (1656- 1730), French mathematicians and missionaries active in China in the service of the Emperor.

The sea between Japan and Korea, whose name, either the 'Sea of Korea,' 'East Sea,' or the 'Sea of Japan,' is here identified in favor of Korea (Mer de Coree). Historically, Korea has used the term 'East Sea' since 59 B.C., and many books published before the Japanese annexed Korea make references to the 'East Sea' or 'Sea of Korea.' Over the centuries, neighboring and western countries have identified Korea's East Sea using various different terms. The St. Petersburg Academy of Sciences referred to the East Sea as 'Koreiskoe Mope' or 'Sea of Korea' in their 1745 map of Asia. Other seventeenth and 18th century Russian maps alternate between 'Sea of Korea' and 'Eastern Ocean.' The 18th century Russian and French explorers Adam Johan von Krusenstern and La Perouse called it the 'Sea of Japan,' a term that became popular worldwide. Nonetheless, the last official map published by the Russians name the East Sea the 'Sea of Korea.' The name is currently still a matter of historical and political dispute between the countries.

This map was originally published by Samuel Dunn in 1784. The second edition, as here, was issued in 1786. Both the first and second editions were published by Robert Sayer. Subsequently the plates were sold to Laurie and Whittle, who issued their own editions into the early 19th century. Cartographically, the map is based upon D'Anville's Carte Generale de La Tartarie Choinoise issued in 1732. Uncommon.