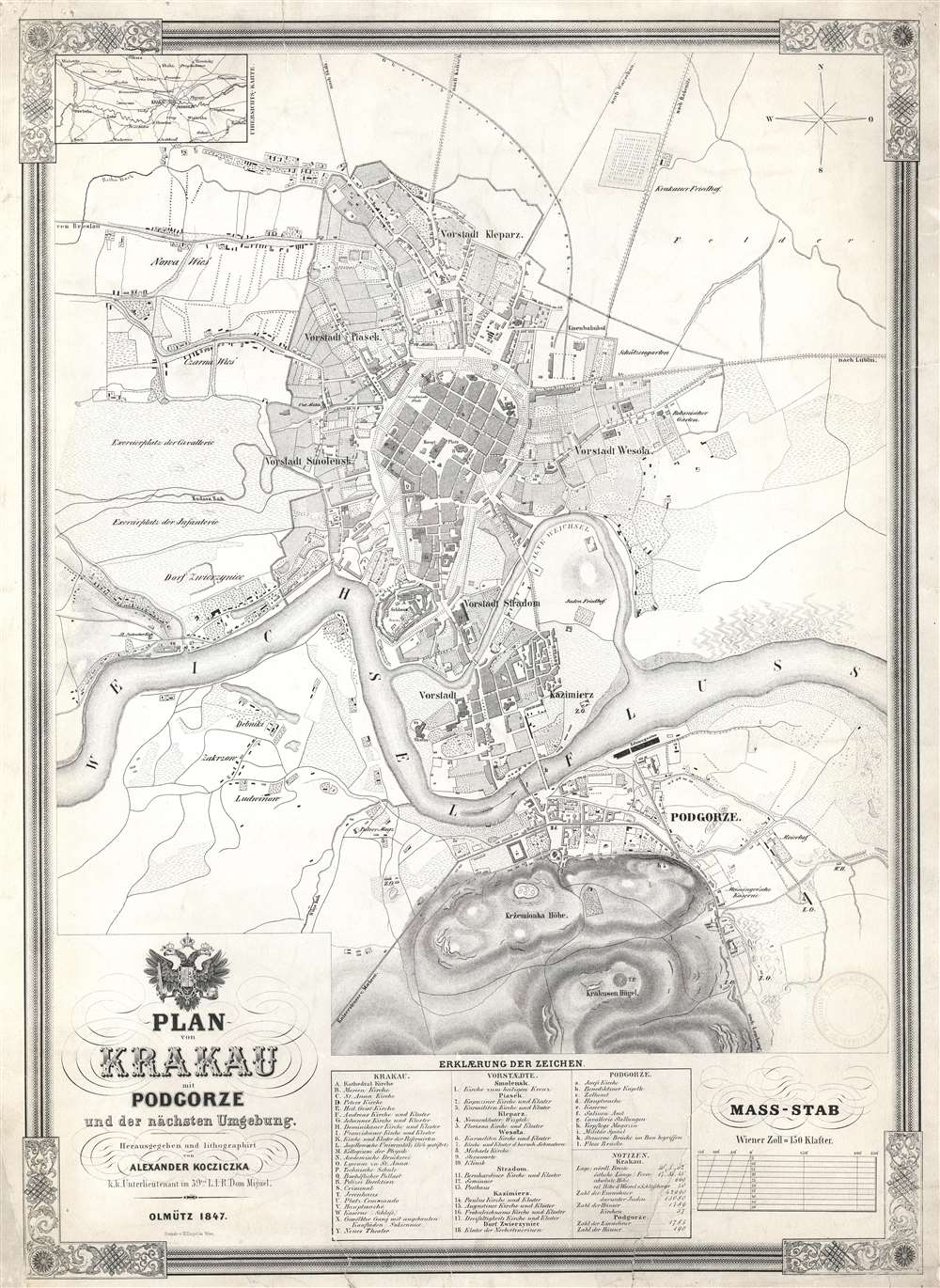 Created shortly after the 1846 Cracow Uprising.

This is an 1847 Alexander Kocziczka city map or plan of Kraków, Poland. The map depicts Kraków from Czarna Wieś and Nowa Weiś to Podgorze and from the Upper Silesian - Kraków Railway to the Krakus Mound. Central Kraków is shaded darker than the rest of the map, making the city center the focal point. Twenty-five different locations are alphabetically identified throughout, among them churches, convents, and the theater, all correspond to a key situated along the bottom border. Eighteen locations in surrounding communities are also identified. In the town of Podgorze, across the Vltava River, 11 sites are numerically identified. Both the infantry and cavalry training grounds are noted along the left border, while the roads to Breslau, Warsaw, and Lublin are identified.

In 1846, Kraków was part of the Free City of Cracow, a city state established by the Congress of Vienna in 1815. It was administered by Russia, Prussia, and Austria and was a center of agitation for Polish independence. In February 1846, the Polish nationalist Kraków Uprising attempted to incite a rebellion. Organized by members of the Polish nobility and middle class, the uprising was designed as a coordinated event throughout partitioned Poland. Unfortunately for the nationalists, spies in several of the cities informed on the organizers, and the only that saw fighting was Kraków itself. The uprising began on the night of February 20, 1846, and soon the nationalists had taken over the city. The small Austrian garrison in Kraków retreated when faced with riots, barricades, and demonstrations. A provisional government was put in place, declaring the end of serfdom, universal suffrage, and other ideals of the French Revolution. Austrian forces quickly regrouped and defeated the nationalists in the Battle of Gdów, on February 26. On February 29, when the nationalist provisional government surrendered. As punishment, the Free City of Cracow privlidge was ended and the city was annexed by the Kingdom of Galicia and Lodomeria, a province of the Austrian Empire. 254 of the revolutionaries were arrested and put on trial in Prussia. 134 of the defendants were acquitted, eight were sentenced to death, and the remaining 112 were sentenced to prison. The death sentences were never enforced and all those convicted were granted amnesty during the Spring of Nations in March 1848.

This map was created by Alexander Kocziczka and published by H. Engel in Vienna in 1847. Three examples are present in institutional collections at the National Library of Poland, the Bibliothèque Nationale de France, and the Kriegsarchiv (War Archive) in Vienna. Bears a stamp from the British Library of Political and Economic Science in the lower right corner, from which it was deaccessioned.