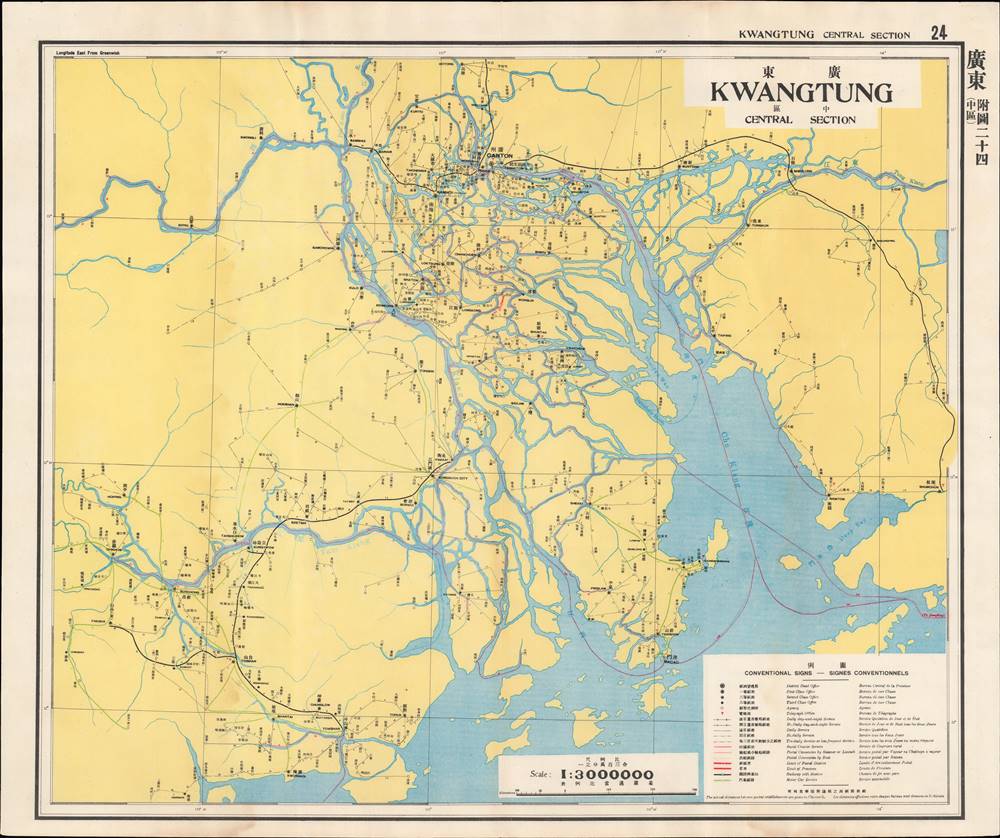 Postal infrastructure as a reflection of China's modernization.
$450.00

This is a map of central Guangdong (Kwangtung) Province from the 1933 edition of The Postal Atlas of China (中華郵政輿圖), compiled by Charles Jacot-Guillarmod. It depicts the evolving postal infrastructure, reflecting a broader modernization drive by the Nanjing government.

This map is the twenty-fourth in the atlas' series. The markings indicated in the legend give a great deal of information about the postal and transportation infrastructure in China, including indicating the frequency of service along various routes. The numbers along the routes represent distance using Chinese li (里), equivalent to roughly 500 meters.

Presented here is the most densely populated area of Guangdong, the Pearl River Delta, centered on Canton (廣州 Guangzhou). This region has historically been and remains one of the most densely populated places on Earth and a major economic powerhouse, though when this map was issued it also suffered from extreme rural poverty. British Hong Kong is not shown, but was deeply connected to this region, including by railway via the Kowloon-Canton Railway at Shenzhen (深圳 here Shumchün). Portuguese Macao (澳門) near bottom-center was also an important source of economic and cultural exchange with the outside world. Toishan (台山, or Taishan) towards bottom-left was the hometown of most Chinese emigrants to the United States and Canada in the mid-late 19th century.

Guangdong played a central role in Chinese politics in the Republican period (1912 – 1949), when this map was made. The province was the homeland of Sun Yat-sen (1866 – 1925) and many other leading revolutionaries and intellectuals of the period, including Kang Youwei (1858 – 1927) and Liang Qichao (1873 – 1929). It also was a base for residual Republicanism after the national government based in Beijing moved towards autocracy and was a hotbed of anti-imperialist nationalism and radicalism in the 1920s as the nascent Communist movement took hold in China.

After the purging of Communists, Chiang established a new national regime in Nanjing. In the decade that followed, despite weak authority, civil war, a Communist insurgency, and an incremental Japanese invasion of northern China, the Nanjing Government and the Kuomintang (KMT) were able to build something akin to modern, functioning bureaucratic state, particularly in the Lower Yangzi Delta around Nanjing and Shanghai, and successfully completed a range of hallmark infrastructure and modernization projects. Nevertheless, full-scale war with Japan in 1937 derailed these efforts, leading ultimately to Chiang's retreat to Taiwan and the Communist takeover of mainland China.